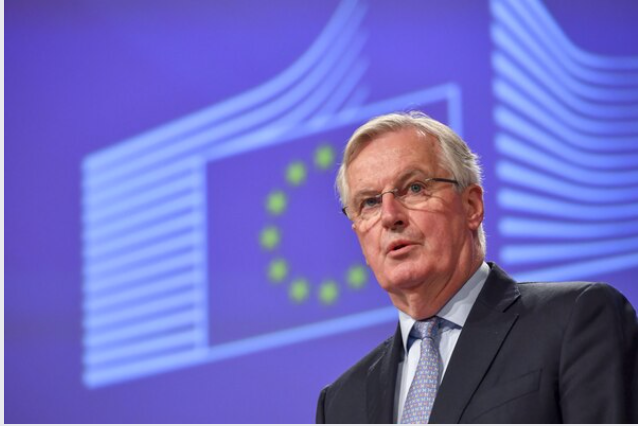 Michel Barnier, chief negotiator for the European Union, in Brussels on March 5, 2020. MUST CREDIT: Bloomberg photo by Geert Vanden Wijngaert.

British and European Union negotiators called on their political leaders to break the deadlocked negotiations over the two sides' future relationship amid signs patience is wearing thin.

Speaking after a fourth round of negotiations ended on Friday, the EU's chief negotiator, Michel Barnier, accused Britain of backtracking on promises it made when it left the bloc and said no significant progress had been made since the talks began.

"I don't think we can go on like this forever," Barnier said at a briefing in Brussels. "These negotiations will need extra political momentum."

That will put pressure on British Prime Minister Boris Johnson and European Commission President Ursula von der Leyen to inject momentum into the process when they hold talks in little over a week's time. The end of the month marks the deadline for the U.K. to ask to extend the negotiating period beyond the year-end, something Johnson has repeatedly ruled out doing.

Barnier predicted talks could now stretch on until October -- but a senior British negotiating official said that may be too late, and called for discussions to intensify into July. Either way, businesses and consumers face months more uncertainty over how Britain will trade with the bloc.

"Agreement of this type, such important agreements, are always agreed at the last minute -- if there is agreement," Barnier said. "In the course of the summer, the very beginning of autumn, we will find some common ground between the EU and U.K." as long as Britain doesn't backtrack on its previous commitments, he said.

Barnier's British counterpart, David Frost, said in a statement that while progress had been limited, the negotiations were positive in tone.

"If we are to make progress, it is clear that we must intensify and accelerate our work," Frost said. "We need to conclude this negotiation in good time to enable people and businesses to have certainty about the trading terms that will follow the end of the transition period at the end of this year."

Both sides had hoped to make significant steps forward this week -- but were thwarted by deep disagreements on the most crucial issues: fishing rights, a level playing field for business, and the role of European judges in overseeing any deal.

The EU is seeking the same access it enjoys to British waters as it does today, while Downing Street is pushing for annual negotiations. The bloc is also pressing the U.K. to sign up to some of its rules to ensure competition between the two is fair, something Britain has pushed back on.

With the U.K. holding firm, Barnier signaled that he might be willing to compromise in two crucial areas, despite some of his rhetoric.

On rights to fish in British waters, the two sides would have to "discuss somewhere in between" their current positions, adding that "we are prepared to discuss what needs to be discussed."

And on state aid -- a key element of Barnier's mandate from EU governments -- he said he has "taken account of this British concern" and wanted to "work together in order to come up with the appropriate toolbox."

Barnier made frequent reference to Brexit's non-binding Political Declaration, which laid the foundations of the future relationship negotiations, but is a looser set of principles than his official negotiating mandate -- another sign that he may be willing to compromise if he gets the backing from the rest of the EU.