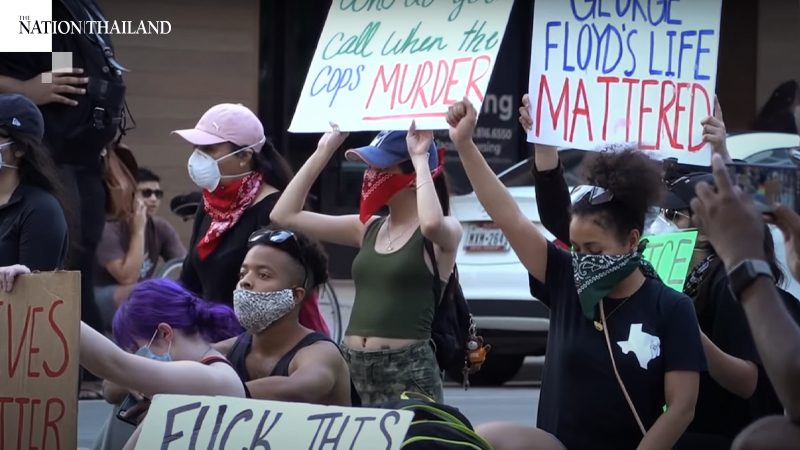 WASHINGTON - President Donald Trump walked buoyantly into the sun-splashed Rose Garden on Friday, exultant over a report that the nation's unemployment rate had unexpectedly fallen after months of climbing sharply.

But it was more than a shot of welcome economic news for a beleaguered president. Trump made it clear that he sees an improved economy as his main plan for tackling racial injustice, at a time when impassioned protesters nationwide are demanding a thorough overhaul of police departments, courts and other institutions.

The answer reflected Trump's long-standing belief in the power of economic growth to solve a range of national ills, even as the unemployment rate remains above 13 percent, and significantly higher for African Americans, Hispanics and Asians. It also raised questions about whether the president has any inclination to embrace the kind of fundamental reforms demanded by the demonstrators.

In a striking sign of how abruptly the landscape has changed, NFL Commissioner Roger Goodell tweeted Friday that the NFL had erred in not heeding players who protested racial injustice. Former San Francisco 49ers quarterback Colin Kaepernick prompted a backlash when he knelt during the national anthem, a gesture that other players followed and that Trump sharply criticized.

"We, the NFL, condemn racism and the systematic oppression of Black People," Goodell tweeted. "We, the NFL, admit we were wrong for not listening to NFL players earlier and encourage all to speak out and peacefully protest. We, the NFL, believe Black Lives Matter."

Trump, Vice President Mike Pence and other White House officials on Friday trumpeted how much the administration has done for African Americans, including criminal justice reforms and "opportunity zones" for inner cities. But the administration has offered few public signals that it will undertake new, far-reaching efforts in coming months.

One senior administra, tion official said some advisers, including Trump's son-in-law, Jared Kushner, and chief of staff Mark Meadows, have been talking with Sen. Tim Scott, R-S.C., other lawmakers and the Justice Department about possible reforms. But those discussions are in their infancy.

"We are looking at potential policy [changes], but nothing is imminent," said the official, who spoke on the condition of anonymity because the internal discussions are ongoing. The official said the White House is trying to weigh the problem of police brutality against "tying the hands of the police." Trump is expected to have conversations about the topic this weekend, the official said.

Amid the uncertain signals from Washington, the Minneapolis City Council moved Friday to crack down on its police force, approving an agreement that would ban officers from using neck restraints and chokeholds like the one used on George Floyd.

The agreement, which needs approval from a judge, also included a provision that would require police officers to verbally or physically intervene if they see another officer using unauthorized force. It warns that if they don't, they could be "subject to discipline to the same severity as if they themselves engaged in the prohibited use of force."

A day after the Minneapolis memorial service for Floyd - the black man who died May 25 after a white police officer knelt on his neck for nearly nine minutes as he pleaded for breath - Trump called Friday a "great day" for Floyd, although it was not entirely clear what he was referring to.

"Equal justice under the law must mean that every American receives equal treatment in every encounter with law enforcement, regardless of race, color, gender or creed," Trump said. "We all saw what happened last week. We can't let that happen."

Michigan Lt. Gov. Garlin Gilchrist (D), who is African American, was among those quick to chastise Trump for invoking Floyd's name at a news conference touting better-than-expected economic figures.

"I've never seen a genuine effort from the Trump administration to reach out to the black community in a solution-oriented way," Gilchrist said on CNN. "You cannot ask a dead black man to look at failed economic policies from this administration as a good thing."

"George Floyd's last words - 'I can't breathe. I can't breathe' - have echoed all across our nation," Biden said. "For the president to try to put any other words in the mouth of George Floyd is frankly despicable."

A Trump campaign spokesman later said many people had misinterpreted the president's remarks when he mentioned Floyd. "The president was obviously speaking of the idea that Americans are coming together to call for equal treatment under the law," spokesman Tim Murtaugh said.

At a meeting with faith and community leaders Friday at Hope Christian Church in Maryland, Pence argued that the administration has long tried to address racial inequality.

"Before the pandemic struck, we were deeply inspired that we had achieved the lowest unemployment rate ever recorded for African Americans," Pence said. "We had expanded opportunity zones across the country that had generated over $100 billion of investment in inner cities that have too often been left behind in jobs and opportunities."

Still, he added, "It will not be enough for us just to heal our economy - we've got to heal that which divides."

But if the administration views economic growth as the chief response to racial injustice, that is likely to infuriate the impassioned protesters who decry what they see as systemic racism in virtually every aspect of American society.

Critics have pointed out that the Trump administration also severely curtailed Obama-era initiatives that mandated far-reaching changes at police departments that showed a pattern of racial discrimination.

On Capitol Hill, some signs emerged this week of bipartisan support for legislation to rein in police violence, but there is far from any consensus on the legislative remedies. House Speaker Nancy Pelosi, D-Calif., has asked leaders of the Congressional Black Caucus to pull together a comprehensive package that could include measures to end "qualified immunity" for police officers, among other steps.

The committee chair, Sen. Lindsey Graham, R-S.C., has expressed support for a "carrots and sticks" approach that he describes as providing incentives for better community-policing efforts. Sen. Roy Blunt, R-Mo., sent a letter to the Justice Department asking to reinstate the "pattern and practice" review of entire police departments, rather than just focusing on prosecuting individual officers, a process that Jeff Sessions largely ended on his last day as attorney general in 2018.

And House Minority Leader Kevin McCarthy, R-Calif., wants to push for better police training. "Make sure training - the right training's out there. That could be tied to federal money and others to making sure that's happened," he told reporters this week.

But such ideas are a long way from concrete legislation that has a chance of passing Congress. In some ways, the current discussion echoes the bipartisan talk of gun violence legislation after mass shootings in Texas and Ohio just hours apart in August 2019; the effort faltered weeks later.

In Minneapolis, by contrast, officials took specific action Friday in approving a new set of policing rules. The proposed directives arose from an agreement between city officials and the Minnesota Department of Human Rights, which this week accused the city and police department of racial discrimination in Floyd's death.

"Black, indigenous, and communities of color have suffered generational pain and trauma as a result of systemic and institutional racism and long-standing problems in policing," read a document approved by the city. "This continuous harm was once again highlighted by the in-custody death of George Floyd. The Parties agree that many previous efforts have not resolved the historic problems in policing in this community."

The city also moved to restrict how police use "crowd control weapons," including chemical agents, rubber bullets, stun grenades and marking rounds, mandating approval from the police chief or the chief's designee.

"This is a moment in time where we can totally change the way our police department operates," Minneapolis Mayor Jacob Frey, a Democrat, said during Friday's meeting. "We can quite literally lead the way in our nation, enacting more police reform than any other city in the entire country, and we cannot fail."

The move came just days after Minnesota Gov. Tim Walz, a Democrat, announced a civil rights investigation of the Minneapolis Police Department, examining policies and procedures over the past decade.

In a state still battling rising numbers of coronavirus cases, Frey and the council met remotely. But as they approved the measure, church bells were ringing in downtown Minneapolis, where National Guard troops deployed last week after days of destructive protests continued to patrol the streets.

While officials look to police reforms in response to Floyd's death, focus is also turning to the courtroom. On Thursday, three of the four fired police officers who have been charged in the Floyd case made their first court appearances.

Defense attorneys for two of the officers - Alexander Keung and Thomas Lane - sought to shift blame to Derek Chauvin, the white police officer who was filmed with his knee on Floyd's neck.

Keung and Lane, who were the first to respond to the 911 call that led officers to detain Floyd, were rookies, their attorneys argued. Keung, 26, was on just his third shift as a full-time police officer, while Lane, 37, was on his fourth day as a full-time officer.

"What is my client supposed to do but follow what the training officer says?" Earl Gray, Lane's attorney, argued in court, according to KARE-TV. "He did everything he was supposed to do as a police officer. . . . What was he supposed to do, let go of his feet and go grab Chauvin and shove him off?"

Thomas Plunkett, Keung's attorney, made a similar argument, telling the judge that both his client and Lane had tried to appeal to Chauvin "that this situation needs to change direction."

Meanwhile, a Confederate statue that stood in downtown Mobile, Alabama, for 120 years was removed early Friday after days of protests against Floyd's death, and after it was vandalized this week.

Mayor Sandy Stimpson, a Republican, did not directly acknowledge the protests but said he made the call to have the statue of Confederate Adm. Raphael Semmes removed. Semmes, who had commanded a warship, lived in Mobile after the Civil War until his death in 1877.

"To be clear: This decision is not about Raphael Semmes, it is not about a monument and it is not an attempt to rewrite history," Stimpson tweeted early Friday. "Moving this statue will not change the past. It is about removing a potential distraction so we may focus clearly on the future of our city."