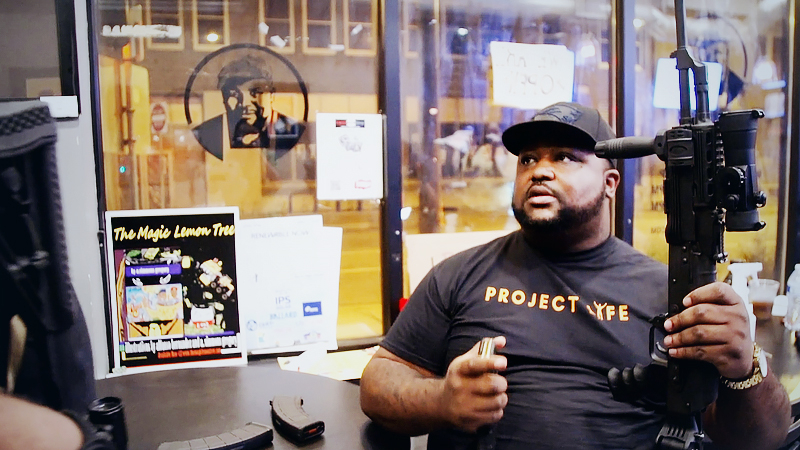 Tyrone Hartwell at Sammy's Avenue Eatery, which serves as headquarters for a citizen patrol group. "We are a peaceful group . . . . We are brothers that banded together to protect our neighborhood." Washington Post photo by Jon Gerberg

MINNEAPOLIS - It's approaching 2 a.m., and city council member Jeremiah Ellison is patrolling his neighborhood in a black sedan when the smell of smoke wafts through the open driver's side window.

Several black-owned businesses had been destroyed in this area - considered the heart of the city's black community - in recent fires that investigators have deemed "suspicious." Neighbors suspect right-wing militias, and social media has been abuzz with purported - but unverified - sightings of masked white men in pickup trucks holding semiautomatic military-style rifles.

The rumors have only fueled the unease that has spread through this community since the death of George Floyd, who lost consciousness under the knee of a police officer on Memorial Day. A video of Floyd's gasps for air triggered massive protests and violent riots that started in this Midwestern city before spreading throughout the country.

Now Ellison - the son of former congressman Keith Ellison, who is prosecuting the four fired officers connected to Floyd's death, as Minnesota's attorney general - is on patrol, hoping to catch the next fire before it destroys another business owner's livelihood. He's also ready to contend with danger of the more human sort, if needed.

As the car fills with the acrid scent of burning chemicals, Ellison tells his friend in the driver's seat to pull over. Before they come to a stop, Ellison, 30, flings open the door and jumps out with a pistol in one hand and a small fire extinguisher in the other. He walks briskly down the street, scanning the block for the origin of the fumes.

"I was excited to fight over the budget. I don't think anybody could have pictured this," Ellison says, noting that even as a city official, he can't control how the police respond to the fires and other threats. "This was something I could do."

Across Minneapolis, community-organized citizen patrols have sprung up in recent weeks as confidence in the Minneapolis Police Department has plummeted. Distrust in the agency had been building for years, and now, with emergency responders focused on riots and looting in the hardest-hit part of the city and with the police department's own 3rd Precinct set ablaze, some residents worry that their neighborhoods have been left vulnerable.

Even as riots and violence in the city have subsided, the string of high-profile killings at the hands of Minneapolis police in recent years has prompted calls to defund or disband the department. A majority of the Minneapolis City Council now supports the idea of replacing it with a new model for public safety.

But in the meantime, residents have taken it upon themselves to create alternatives, including forming armed defense forces.

Ellison has been a constant presence on the streets and at protests since Floyd's death, and he started a community patrol the Friday after the incident. While on patrol, he joined a last-ditch - and ultimately unsuccessful - effort to squelch a fire at the Fade Factory barbershop, carrying buckets of water to douse the flames before firefighters arrived. The owner, Trevon Ellis, gave an emotional interview on live TV as his shop burned, explaining that the fire department - overwhelmed by calls throughout the city - had put him on a waiting list and took two hours to arrive.

"I think that we have got to dramatically reimagine how we keep people safe in cities. I think that's been true," Ellison said as he stood on his porch, taking a break from a recent patrol. "But I think that we have underestimated just how urgent that work is. The police forces in the way that they've existed, I think need to not exist."

In Ellison's neighborhood of north Minneapolis, the local chapter of the NAACP has begun to try to do just that: Create a community alternative to police with armed citizen patrols. They call their group the Minnesota Freedom Riders, a reference to the civil rights activists who rode buses through the segregated South in 1961.

On Tuesday, dozens of volunteers, mostly African American, filtered into Sammy's Avenue Eatery, a sandwich and coffee cafe. They checked in with a woman holding a clipboard, who gathered their contact information, asked how many were in their parties, and noted whether they were armed. Almost all of them said they were.

Then each volunteer took a seat as orientation began, led by Minneapolis NAACP President Leslie Redmond.

"Too often, when black people are trying to do the right thing and fight, we are left defenseless, and America has shown us time and time again that they're not coming to our protection," she told the group. "So we've got to protect ourselves."

The project began the previous weekend, just days after Floyd's death, and has grown to 50 volunteers. They divide into groups of three that keep watch at key intersections while others go on patrol.

Redmond said she spoke to Minneapolis Police Chief Medaria Arradondo about the project, and also informed the National Guard. She wasn't asking them for permission, she insists; she just wanted to let them know: "We are activating our community."

"We are out here simply to defend and protect," she told the group of volunteers. "We are not chasing anybody. We're not here to shoot anybody. We are literally here to protect black businesses and our black community."

The Minneapolis Police Department did not respond to a request for comment. The Minnesota National Guard said it did not have an official statement concerning the community patrols, but spokesman Scott Hawks said, "Our interactions have been uneventful and cordial with the groups that we have encountered."

On the streets, there was evidence of support. One evening, a Minneapolis police officer rolled down his window to chat with the volunteers, and someone in a National Guard truck made a heart sign with his hands as his convoy passed one group.

Volunteer Nate Penrtz, 36, said the fire at the Fade Factory - and Ellis's story about a two-hour wait for a fire crew - spurred him to join the patrol.

"If it weren't for our community standing watch, nothing else was going to prevent these arsonists from burning it down," he said. "MPD and the National Guard weren't going to keep us safe. We had to do it."

The Freedom Riders do face challenges. Some volunteers worry that it will be hard to sustain turnout through the summer, with many people working during the day and guarding their neighborhoods at night. And the guns are clearly visible: Cars approaching the intersection near Sammy's were greeted by the sight of men holding rifles, shotguns and handguns.

Minnesota law allows people with permits to openly carry guns, though volunteers displayed various levels of comfort with their firearms. At one checkpoint, a young man nervously looked down the street as a car approached, his finger on the trigger of a semiautomatic rifle half-raised in front of him. Later, another volunteer in his 30s walked past while gripping a shotgun with one hand.

Others were more relaxed and less quick on the draw. Tyrone Hartwell, 35, originally from Mississippi and a Marine Corps veteran, carried an AK-47 as he helped direct other volunteers. He compared the effort to his time in the military, and when asked who the "enemy" is in this case, he alluded to the widespread rumors of armed white supremacists arriving in Minneapolis.

"We have to be armed to be able to protect them," he said of community members, noting that he has two young children. "That's the one reason we are armed. We are a peaceful group, a loving group. We are brothers that banded together to protect our neighborhood."

Hartwell, a music producer who works under the name Sippizone, said he didn't think the national news media had grasped the level of fear gripping Minneapolis and its black neighborhoods.

While the mood on the streets is tense, some see the neighborhood patrols as seeds that may produce long-lasting change. City Council member Phillipe Cunningham's ward covers part of the neighborhood, and recently he stood with one of the night watch groups outside Firebox Deli, which served brisket and ribs to passing volunteers.

"What this looks like moving forward is for us to actually really begin the process of building public safety strategies and systems outside of policing," he said. "And so now, we are starting to begin the process of showing that it works here with everyday folks and that we can build it from here."