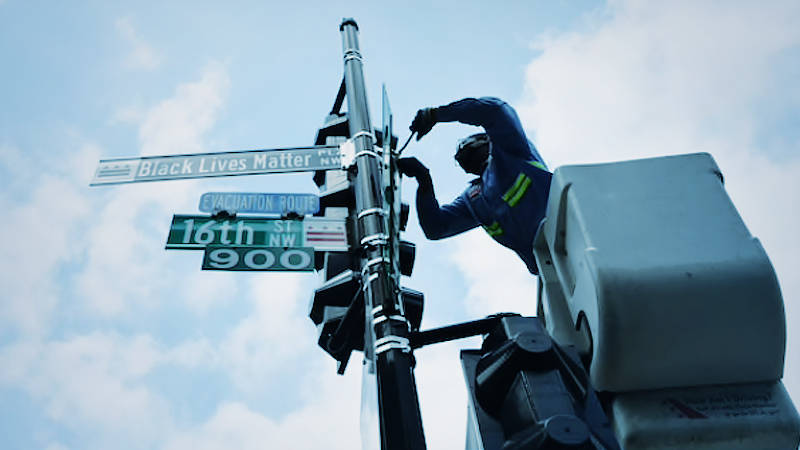 A city employee installs a sign to change the name of the street outside St. Johns Church to Black Lives Matter Plaza NW near the White House in Washington, D.C., on June 5, 2020. MUST CREDIT: Washington Post photo by Toni L. Sandys

WASHINGTON - The first night of major unrest in Washington had exploded in chaos on May 29, with protesters and Secret Service officers battling outside the White House. At 8:30 the next morning, Mayor Muriel Bowser and her senior aides huddled on a conference call for an update from the city's police chief.

Eleven minutes later, they were interrupted - by a number of angry tweets from President Donald Trump. Praising the federal officers, Trump warned protesters of the "vicious dogs" and "ominous weapons" at their disposal. Then, as the mayor's chief of staff read the tweets out loud, Trump lambasted Bowser.

Trump wrote that the Democratic mayor "who is always looking for money & help, wouldn't let the D.C. police get involved. 'Not their job.' Nice!" It was a false accusation. The mayor had never said those words.

Bowser and her team finished their discussion, said one city official with knowledge of the call, and then the group "went back to the tweet and how the mayor should respond."

The response has been emphatic. Since Trump's personal attack on May 30, Bowser, a Democrat, has fought back fiercely against the president's bullying, taunting him with tweets and criticisms of her own. On Friday, she rebuked him with a defiant display of street art in which she sought to draw a clear contrast with Trump's calls for "law and order" by demonstrating active support for peaceful protesters of the Black Lives Matter movement.

Over the past 10 days - set against the backdrop of the pitched national protests over police violence - their once relatively temperate relationship has erupted into an ugly schism freighted with the overtones of race and power that have infused the protests, as well as city leaders' long and fruitless fight for District of Columbia statehood.

For Trump, the row has resembled the frequent nasty political fights he has had, often at his instigation, with numerous Democratic mayors and governors as he has sought to portray them as incompetent leaders of dysfunctional cities and states. Aides said the president believes Bowser, despite seeing violence in protests in other cities, was slow to react - and that scenes of fires and looting in the nation's capitol were damaging to public confidence just as the president was pushing to reopen the economy amid the coronavirus pandemic.

"If the images of D.C. are that the White House is under siege, people all over the country are going to be concerned," said one outside Trump adviser, who, like other presidential confidants, spoke for this story on the condition of anonymity to detail private conversations. "The economy is not going to continue growing and reopening."

For Bowser, the confrontation has centered on her belief that Trump's show of force has emboldened law enforcement amid the nationwide protests after George Floyd's death in the custody of Minneapolis police two weeks ago. In her view, federal authorities have swarmed sections of downtown Washington in what resembles a military takeover that has made residents fearful even as arrests have dropped sharply in recent days - a reminder that the federal city does not enjoy the self-governing autonomy of the 50 states.

"We should be in control of what's happening," said John Falcicchio, the mayor's chief of staff.

As the mayor and her team weighed a response to Trump's tweets that Saturday morning, it wasn't his personal attack that most angered Bowser, according to aides.

Rather, it was his use of the phrase "vicious dogs," which the mayor, who is African American, viewed as racist. A day earlier, Trump had used the phrase "when the looting starts, the shooting starts" to threaten Minneapolis protesters, echoing the threats of a white Miami police chief in 1967 that had angered black civil rights leaders.

"She honed in on that phrase. To think about her parents, their peers, folks who actually had to go through that. She went to Selma just a year and a half ago with John Lewis," he said, referring to the Democratic congressman from Georgia who is a civil rights icon.

An hour after Trump's tweets, the mayor hit back with a pair of her own. She defended the District police, saying it would protect all city residents, including the protesters and Trump. Then she taunted him for hiding in the executive mansion behind the wrought-iron White House security fence.

"There are no vicious dogs & ominous weapons," she wrote. "There is just a scared man. Afraid/alone."

The dig appeared aimed to humiliate Trump, who revels in projecting strength. Though mayoral aides said Bowser didn't know it at the time, the Secret Service had moved Trump to a secure bunker under the White House during the height of the chaos Friday, a detail made public in a New York Times report last Sunday.

That disclosure outraged Trump, who initially denied it, and he became more determined to seize center stage in quelling the protests. The Washington Post subsequently reported that the move to the bunker was prompted by a group of protesters who hopped over temporary barricades set up near the Treasury Department grounds.

The president's aides had briefed him that the District police were struggling to control crowds around Lafayette Square, a federal expanse overseen by U.S. Park Police. On May 31, Republican senators and other Trump allies flooded the White House with calls imploring him to act.

Trump watched televised news coverage of the fires and protests. Arrests by District police surged from zero on May 29 to 19 the next day and 90 the day after, and the president grew so heated that he floated the idea of sending thousands of military troops into Washington's streets - and into other cities if local leaders failed to stem looting and violence.

"Why did things deteriorate so fast? Because for two solid days nothing happened in Washington, D.C., when it was within the mayor's power to make sure that something could happen," said a senior Trump administration official who has dealt with Bowser. "You had images on national TV of facilities burning, which reportedly were a church and parts of a park in the center of our nation's capital, which sent a very bad message to the world."

Bowser had implemented an 11 p.m. curfew May 31, but reports that a blaze had damaged the iconic, pale yellow St. John's Episcopal Church - set across Lafayette Square Park from the White House and long frequented by presidents - presented an opportunity for Trump to wrest control.

The mayor arrived at Lafayette Square on Monday morning. After an interview with "The Today Show," she toured the damage in the church nursery in the basement.

Water soaked the floor, and Bowser, wearing a black face mask amid the coronavirus pandemic, stepped gingerly onto a wooden plank to take a look. A cellphone photo taken by a mayoral aide shows charred walls, exposed electrical wiring and a room covered with debris.

The fire had been extinguished. But the political inferno was just igniting.

White House chief of staff Mark Meadows contacted the mayor and floated a proposal of a federal takeover of the city's police department - a highly offensive notion to city leaders still scarred by the federal government's financial takeover of a nearly bankrupt District government in the late 1990s and early 2000s.

Bowser balked, promising the city would step up enforcement. She announced a citywide 7 p.m. curfew for Monday and Tuesday evenings.

City officials met that day with FBI, military and Justice Department officials to develop a security plan for Monday night. District Police Chief Peter Newsham expressed a willingness to work collaboratively with the administration, two officials with knowledge of the meeting said.

But as the protesters swelled at Lafayette Square, federal authorities chose not to wait until the curfew to make their move.

At 6:43 p.m., Trump began remarks in the Rose Garden, pledging support for peaceful protesters but chastising the looters for committing "acts of domestic terror."

"We are putting everybody on warning: Our 7 o'clock curfew will be strictly enforced," Trump declared - though it was the city that had the enforcement authority.

As the president spoke, cable networks offered a split screen of protesters in the park. In a shocking scene, Park Police, wielding chemical gas canisters, rubber projectiles and metal riot shields, forcefully cleared them out.

Moments later, Trump and his senior aides, including military leaders, strode through the park for a photo op outside St. John's, with the president brandishing a Bible. Unlike Bowser, they did not go inside.

"On Monday, you saw something you hoped to never see in the United States of America: federal police moving on American people protesting peacefully in front of the people's house," Bowser said Saturday afternoon, recalling the scene as she met with protesters.

By the end of Monday, 289 people would be arrested, according to District police statistics, the most since the protests began.

Unlike governors, Bowser does not oversee the National Guard in Washington, and guard reinforcements from other states poured into the city at the behest of the Trump administration. Federal authorities moved to extend security fencing to encircle Lafayette Square to the north and the Ellipse to the south.

Bowser fought back, demanding that all federal forces not based in the city be removed. On Thursday, she publicly expressed alarm that the new federal security perimeter would become permanent, and she sent Trump a letter saying the presence of the federal forces was "inflaming" the situation and was unnecessary. Arrests of protesters had dropped to 29 on Tuesday and zero on Wednesday, according to District police.

As Trump saw it, according to the outside adviser who spoke with him, Bowser was ungrateful for the protection from the National Guard and was eager to win political points with Democrats by kicking the Guard out of the city.

"She's weak," Trump said repeatedly, according to the adviser. The president has bragged to White House officials this week that his actions were the prime reasons the protests got less disruptive, according to aides.

But Bowser wasn't finished making her claim for the city's streets. In a meeting with staff, Bower unveiled a plan to add a symbolic flourish to her letter to Trump: She would rename the intersection of 16th and H Streets NW, abutting Lafayette Square and St. John's Church, as "Black Lives Matter Plaza."

As night fell on Thursday, a team of eight muralists plotted the design and, under the cover of darkness at 3 a.m. Friday, they began painting 50-foot-tall, bright yellow letters spelling out "BLACK LIVES MATTER" along 16th Street leading toward the White House.

White House officials viewed the move more as a serious escalation and warned that the mayor has done "irreparable harm" to her relations with Republicans on Capitol Hill.

But Bowser remained unbowed. On Saturday, while marching with protesters to the newly minted plaza, the mayor offered another shot at her antagonist.