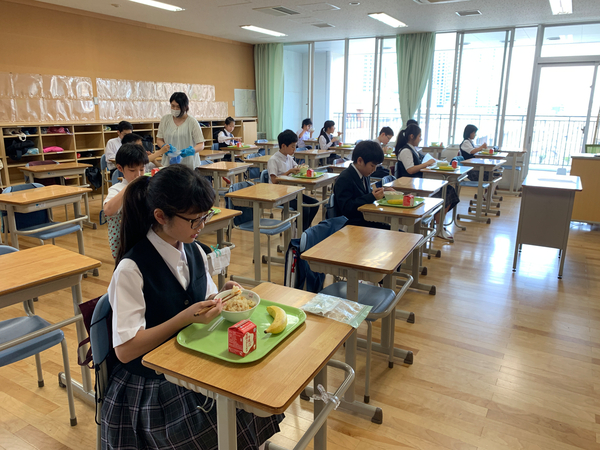 TOKYO - As Japan reopens its schools, parentsare getting some early morning homework.

They are expected to take their children's temperatures every morning and enter the results on a health report, which is then brought to school and checked by teachers on arrival.

The monitoring is just one of the new realities at schools across Japan, which are now back in session for the first time since March. It's also a taste of how education around the world is remaking itself in the coronavirus pandemic era.

Schools have been closed in 146 countries around the world, according to UNESCO, affecting at least two-thirds of students globally. Japan is among a small number of countries trying to find a way to restart education - under restrictions and with emergency plans to close again if the virus finds a foothold.

At Hoyonomori Gakuen, a school in Tokyo's Shinagawa ward, the new rules, including temperature checks, are set down in a 28-point plan designed by the school to minimize risks.

Children attend on alternate days, so half the desks in every classroom can be left empty, and for now they are also going home early. Teachers and students all wears masks.

The students line up - paying attention to marks on the floor to indicate appropriate distancing - to wash their hands before classes even start, and continue to do so throughout the morning.

Lunch is eaten at their desks, facing forward, in silence.

It's harder to make new friends when everyone has to keep their distance, says Naho Shinagawa, and school would be much more fun if she could play outside during recess. But the 8-year-old third-grader is just glad to be back, learning and playing with her friends again.

"When I walk to school, I feel a little bit scared in case I pass someone who is infected, but once I'm here, I feel safe," she said. "I'm so glad I can take my classes together with everyone."

The silent lunchtime is a hard adjustment for Yukihisa Ishikawa, an 11-year-old boy.

"I enjoy class, and between classes, although we have to keep our distance, I enjoy talking to my friends," he said. "But a good part of lunchtime is talking to friends while eating, and if we can't do that, it's disappointing."

Ishikawa and fellow sixth-grader Miki Akimoto say it's easier learning at school than it was at home, not least because they have a sense "that we're all in it together."

"At home, my younger brother and sister would finish their work earlier than me, and it was difficult to concentrate," Akimoto said. With her dad also often working from home, it also tended to be quite crowded, she added.

At school, both kids said it was hard to remember to keep their distance from their friends all the time.

"Actually when my friends come close to me, I start to become aware of social distance," Ishikawa said. "Then I get to talking myself, and it's easy to forget."

After closing schools at the beginning of March and declaring a state of emergency in April, Japan has managed to slow the spread of the novel coronavirus, with just a few dozen new cases recorded every day. Its official death toll stands at just over 900, a fraction of the mortality rates seen in the United States and Western Europe.

But school principal Jun Ninomiya says he is still checking the government's coronavirus data, in detail, every day, and has drawn up contingency plans in case the school needs to close again. The end of the state of emergency has seen a small but significant rise in cases, especially in Tokyo and the city of Kitakyushu in Fukuoka prefecture, in Japan's southwestern island of Kyushu.

At least 13 children in Kitakyushu have now been found to have the coronavirus, including five in the same class, although not all had symptoms. Five schools in the city have been forced to close again, after reopening only last month. Some parents have reportedly withdrawn children from nearby schools.

Ninomiya said he had expected some parents to be reluctant to send their children back to Hoyonomori Gakuen, "but so far those fears were not justified.

"Parents have been waiting to send their children back to school," he said, "so this is the right time."

Children have not been as badly affected as older adults by the coronavirus. That does not mean they are entirely safe, nor that schools can't become vectors of virus transmission, experts say. Children in Asia, the United States and Europe have also been diagnosed with a "multi-system inflammatory syndrome" similar to Kawasaki disease, thought to be linked to the coronavirus.

Nearby South Korea had to delay its plans to reopen schools five times, finally beginning a phased reopening in late May, 10 weeks after the original start date.

Even then, fresh clusters of infections emerged in and around Seoul. Some students were found to be infected, and hundreds of schools were forced to delay reopening or to close their doors again only days after having reopened.

In Japan, the Ministry of Education says singing should not be allowed in music classes just yet, because that can encourage virus particles to spread, while physical education should be designed to avoid contact between children.

Hoyonomori Gakuen has removed many doors that divided up the school and is keeping its windows open to maximize ventilation, while also keeping the air conditioning on. It can still be uncomfortable in a face mask, though.

"The mask does get hot, and I'm often tempted to remove it," said third-grader Shinagawa, who isn't a huge fan of social distancing either. "It's sad not having a friend sitting next to me at school."