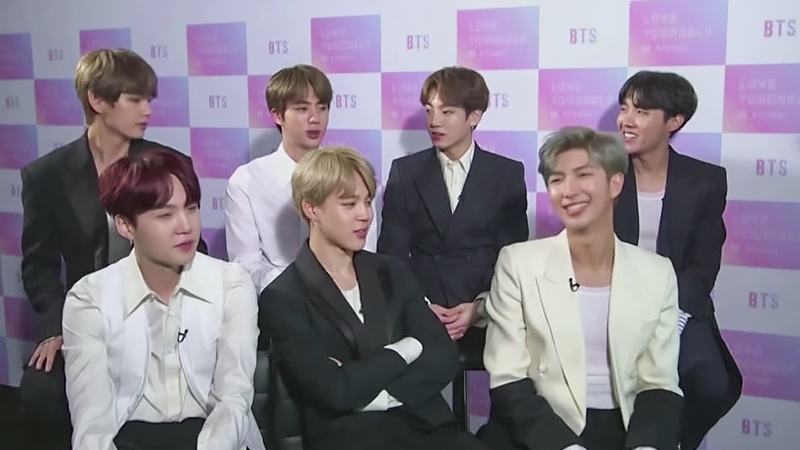 Korean pop band BTS, one of the globe's most popular music groups, donated $1 million to Black Lives Matter after a week during which the band's enormous online fan base organized to flood hashtags and apps in support of the movement.

BTS's record label, Big Hit Entertainment, confirmed the donation this weekend, a few days after the band tweeted, "We stand against racial discrimination. We condemn violence. You, I and we all have the right to be respected. We will stand together."

By that point, BTS's fan base - known as their ARMY, which stands for "Adorable Representative M.C. for Youth" - had already spent the week carrying out organized online protests on behalf of Black Lives Matter along with other K-pop fans.

Their activism appears to have begun on May 31 after the Dallas police department tweeted, asking for the public's help: "If you have video of illegal activity from the protests and are trying to share it . . . you can download it to our iWatch Dallas app. You can remain anonymous."

BTS fan account @7soulsmap retweeted the police department, adding "THAT'S WHY YALL NEED TO COVER THEIR FACES PLEASE COVER THEIR FACES." Despite being posted by a user with fewer than 550 followers, the message was then retweeted more than 25,000 times and liked by more than 46,000 users - and that was only one of several K-pop fan accounts calling others to action.

Fans began flooding the Dallas department's tweet with replies, many of them videos or GIFs featuring K-pop stars singing and dancing. They also reportedly downloaded the iWatch app en masse, creating technical difficulties that crashed it.

A similar scene played out the next day, as K-pop fans flooded and clogged a portal set up by Grand Rapids, Mich., police for witnesses to upload picture or videos of protests, and a Twitter hashtag created by Kirkland, Wash., police requesting footage of a local demonstration.

Later, they managed to harness control of the #WhiteLivesMatter hashtag, filling it again with images, videos and GIFs of K-pop stars, along with goofy memes. The result was a strange tapestry of posts showing things such as an image of a white woman with what appears to be an automatic weapon interspersed with dancing boy bands.

Media outlets from GQ to "Good Morning America" covered the story of Korean pop music fans mobilizing their online weight, even though it's not a particularly new phenomenon. In the past, K-pop fans have taken to the Internet to fight for various causes, from LGBTQ rights to allegedly sparking protests against the Chilean government.

As Vanity Fair's R.O. Kown noted, most people's understanding of who "K-pop fans" actually are is flawed, as the group is not a specific monolith. "If you're unfamiliar with K-pop, try to think of what it would mean for 'fans of popular American music' to be a group," Kown wrote.

Some activist fans were disappointed by the news coverage.

"I'm a little saddened that we're seen as an outside force in all of this when in reality we have been deeply involved since the beginning by sharing petition links, donating, and spreading useful information," the user behind @7soulsmap told Kown. "It's less about K-pop and more about us already being a well-networked community on social media."

They also form part of a community attempting to deal with issues inside their own decentralized ranks. As Abby Ohlheiser wrote in MIT Technology Review, "the rapid veneration is overshadowing the more complex dynamics underlying K-pop fandom . . . The newfound reputation for anti-racist heroism largely ignores the voices of black K-pop fans, who have struggled with racism and harassment within the community."

Ohlheiser goes on to list a variety of examples, such as one K-pop group performing in blackface and the experience of black fan and culture writer Keidra Chaney, who said "to see white K-pop fans get praised and credited in the media for anti-racist activism, while black fans have faced (and will continue to face) anti-black harassment online for spearheading these conversations, feels like a punch in the gut - that we are being used for our social currency and then discarded."

The racism within the BTS fan community was pervasive enough to prompt fans to speak out in May 2018 with the hashtags #BlackARMYsequality and #BlackARMYsMatter.

While fans have long spoken out against perceived inequalities of all forms, what's striking in this instance is how many actual K-pop stars have publicly supported the movement.

"Black culture helped me find confidence and character," wrote BM, a member of the group KARD, in an Instagram story. "I fell in love with hip-hop and R&B from a very young age and it has given me character and confidence."

K-pop star CL wrote on Instagram: "Artists, directors, writers, dancers, designers, producers, stylists in the K-pop industry are all inspired by Black culture whether they acknowledge it or not. I would like to encourage K-pop fans to give back and show love and support for all that we have received from Black artists. I want to explain to K-pop fans, fellow Asians and non-Americans who feel like they have no connection to what's happening that we are all connected."

Many others in the genre also posted about George Floyd and BLM, and some have suggested it is directly tied to the actions of their fans.

Though K-pop's multitudes of fans constitute a diverse community filled with different viewpoints, they do appear to have particularly incisive insight into how to harness the power of social media. At moments such as this one, this can give the impression of K-pop fans as a singular body.

As Ohlheiser wrote, "They're so good at manipulating the metrics of social media that people who are new to watching K-pop in action can, on first glance, mistake the accounts for bots."