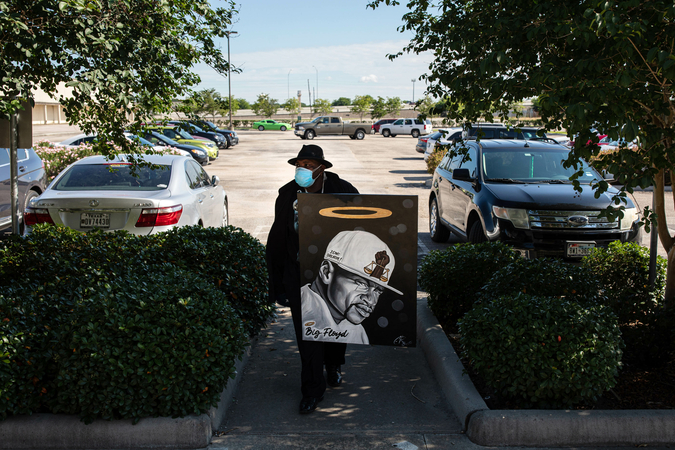 Brett White, an artist from Dallas, carries a painting he made of George Floyd before lining up to attend the public viewing in Houston on Monday, June 8, 2020. MUST CREDIT: Photo for The Washington Post by Tamir Kalifa

MINNEAPOLIS - Derek Chauvin, who as a Minneapolis police officer kept his knee on George Floyd's neck for nearly nine minutes as he struggled to breathe and ultimately died, made his first court appearance Monday - hours after congressional Democrats unveiled broad legislation aimed at reforming policing nationwide.

The appearance came immediately after a weekend of peaceful protests in which massive and diverse crowds of demonstrators demanded change, but it was unclear whether Monday's legal and legislative developments would satisfy those who have taken to the streets in recent days.

As Floyd's memorial service in Houston began Monday, the impact of his death continued to reverberate around the country. The debate shifted from Chauvin's widely condemned - and now criminally charged - arrest tactic to the hotly debated issue of whether American policing requires a top-to-bottom overhaul. While Black Lives Matter protesters have called on lawmakers to "defund the police" and decried systemic racism in law enforcement, others - led by President Donald Trump - have sought to brand the movement as extreme and argued that policing does not need broad reform.

While Trump said he would consider ideas for how police could operate "in a much more gentle fashion," White House press secretary Kayleigh McEnany said the president had not yet reviewed the legislation put forward by Democrats. The Justice in Policing Act of 2020 would ban chokeholds, establish a national database to track police misconduct and prohibit some no-knock warrants, among a wide array of steps.

In another consequence of the protests, Portland Police Chief Jami Resch announced her resignation, announcing as her successor Charlie Lovell, an African American lieutenant. Resch, who is white and has been on the job for six months, called Lovell "the exact right person at the exact right moment."

The Portland Police Bureau had faced criticism for its handling of the demonstrations, especially after video surfaced of officers using tear gas.

The debate over policing and racial inequality has begun to shape the 2020 presidential race, with Trump and presumptive Democratic nominee Joe Biden staking out starkly different positions. While Trump held a roundtable with law enforcement on Monday, Biden met privately with members of Floyd's family in Houston.

Trump and his campaign have seized on the "defund the police" mantra in an effort to depict Democrats as weak on crime. The president tweeted Monday, "the Radical Left Democrats want to Defund and Abandon our Police. Sorry, I want LAW & ORDER!"

As Trump was tweeting, his campaign held a call with reporters aimed at linking Biden to the "defund" movement. Biden told CBS News on Monday that while he does not support defunding police departments, he favors conditioning federal aid to law enforcement "on whether or not they meet certain basic standards of decency and honorableness."

Activists and officials define the meaning of "defund the police" differently, with some advocating wholesale abolishment of police departments and others suggesting more modest steps to shift funding to other government agencies and programs.

The policing legislation put forward by Democrats did not address the funding issue. During a news conference, some Democratic leaders sidestepped questions about their views on the push to reallocate resources away from law enforcement.

House Speaker Nancy Pelosi, D-Calif., suggested that "defunding" was not an issue for Congress. "That is a local decision, a local level," she said. "But . . . that doesn't say we're going to pile more money on to further militarize the police."

While the police bill probably will pass the Democratic-controlled House in short order, its fate in the GOP-led Senate is far less certain, as is its approval by Trump.

The bill would ban racial profiling in law enforcement, mandate additional training and require the use of body cameras for federal officers. It would also change immunity standards, making it easier to sue police officers. McEnany said that provision was a "nonstarter" for the White House.

Rep. Karen Bass, D-Calif., chairwoman of the Congressional Black Caucus and a co-architect of the proposal, said the legislation has more than 200 co-sponsors in the House and Senate.

Democrats released the legislation shortly after holding a moment of silence for Floyd and others killed in police custody. Lawmakers wore kente cloths as they knelt in silence for 8 minutes and 46 seconds, the exact time that Chauvin held his knee on Floyd's neck before he died.

Meanwhile, hundreds of people gathered in Houston to pay their respects to Floyd, whose death sparked the worldwide protests and elevated a debate about racism and excessive policing to the center of the national discussion.

Mourners gathered at a mural near the Third Ward housing project where Floyd had lived before moving to Minneapolis. They prayed and left messages and tokens of affection. Members of the public were allowed to enter the Fountain of Praise church sanctuary in groups of up to 15 for the viewing.

Diverse groups of visitors gathered for hours in the blistering heat to catch shuttle buses from a nearby shopping center, and each group had 10 minutes to reflect before being ushered out, a restriction imposed to limit the spread of the novel coronavirus.

Some who attended said they did not know Floyd but were moved by the viral video that captured the last moments of the 46-year-old father of two. In the video, Floyd could be seen handcuffed and pinned to the pavement on Memorial Day outside a Minneapolis market where employees had called police about a counterfeit $20 bill.

A private funeral is scheduled for Tuesday. Biden will appear in a recorded video message that will play at the funeral, according to his campaign.

In addition to shaping the presidential race, the protests over Floyd's death continued to make an impact across the globe.

French Interior Minister Christophe Castaner said Monday that French police would no longer use chokeholds, after days of demonstrations that saw tens of thousands march through French cities.

In Washington, Pelosi and Senate Minority Leader Chuck Schume, D-N.Y., wrote a letter calling on Trump to reopen some of the public space around the White House, which has remained barricaded behind more than a mile of fencing that was quickly erected last week after protests grew unruly.

"Lafayette Square should be a symbol of freedom and openness, not a place behind which the leader of our Executive Branch cowers in fear of protesters who are crying out for justice," they wrote.

The next phase in the demonstrations, which have largely been peaceful but have included bouts of looting and rioting, could depend in part on what happens in Chauvin's trial.

The former police officer is being held at a state prison in Oak Park Heights, about a 30-minute drive from Minneapolis, and he appeared via a remote video feed inside a Hennepin County courtroom.

Bail was set at $1.25 million - or $1 million with conditions, including the surrender of firearms and a promise not to contact members of the Floyd family.

As a state prosecutor laid out the reasoning for the bail request, Eric Nelson, an attorney for Chauvin, made no objections and did not indicate whether his client could make bail.

On the courtroom video screen, Chauvin was seen being led into a small conference room, handcuffed and wearing an orange jumpsuit, where he was seated alone at table, a tiny figure on a large television. The former officer said little - spelling his name for the court record, listing his former address and specifying "yes" when asked by Jeannice Reding, the presiding judge, whether he could hear the court. The proceedings lasted about 14 minutes.

He is scheduled to be back in court on June 29, when he is expected to make a plea. Chauvin indicated Monday that he had waived his right to appear in person during court proceedings.

Chauvin, who is white, was filmed with his hands in his pockets and his knee on Floyd's neck as two other officers - Alexander Kueng, 26, and Thomas Lane, 27, held him down. A fourth officer, Tou Thao, 34, was filmed pushing bystanders back from the scene.

All four officers were subsequently fired and charged in the incident.

Defense attorneys for Lane and Kueng have sought to shift blame to Chauvin, a 19-year veteran of the force. They say their clients, who were the first to respond to the scene, were rookies and had been on the job for less than a week and had relied on Chauvin for guidance.

Charging documents say Lane twice asked Chauvin whether officers should roll Floyd onto his side as the man repeatedly told officers he was struggling to breathe, but Chauvin rebuffed him.

"What is my client supposed to do but follow what the training officer says?" Earl Gray, Lane's attorney, argued in court. "He did everything he was supposed to do as a police officer . . . What was he supposed to do, let go of his feet and go grab Chauvin and shove him off?"

Thomas Plunkett, Keung's attorney, made a similar argument, telling the judge that both his client and Lane had tried to appeal to Chauvin "that this situation needs to change direction."

An attorney for the third officer, Thao, who arrived on the scene with Chauvin, has signaled that his client has been cooperating with investigators with the Minnesota Bureau of Criminal Apprehension, which is exploring state charges in the case.