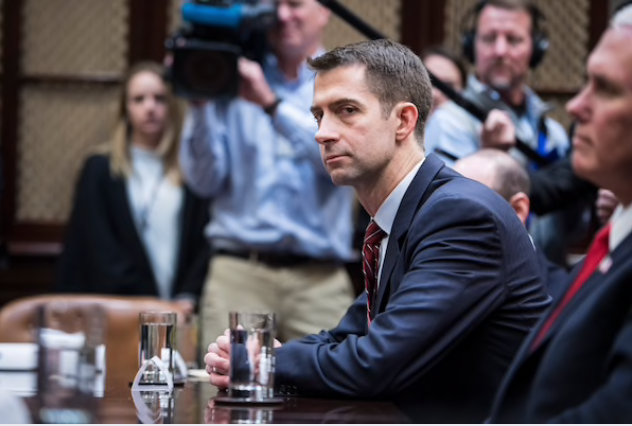 Rep. Tom Cotton, R-Ark., listens as President Donald Trump speaks during a meeting about immigration with Republican Senators in the Roosevelt Room at the White House on Jan. 04, 2018. MUST CREDIT: Washington Post photo by Jabin Botsford.

With his call for the military to be deployed in U.S. cities gripped by protests over police brutality, Sen. Tom Cotton has found himself in a familiar position: Rallying conservatives, enraging Democrats and further raising his national profile amid growing speculation over his future ambitions.

The Arkansas Republican has been minted as a political up-and-comer since he entered Congress in 2013, yet he cemented his status as a hero on the right when an op-ed he authored for the New York Times on using the military to deter looting and violent unrest amid the demonstrations provoked an unusual public furor among its journalists, who called it inflammatory. The uproar led to the ouster of the newspaper's powerful opinions editor.

That turmoil at the Times has only emboldened Cotton, 43, a relatively junior senator who has nonetheless demonstrated his influence in the Trump era by having the president's ear and embracing key tenets of Trumpism that have, at times, put the men at odds with some in their own party.

In interviews and through his Twitter account, Cotton has made it clear that he is enjoying the fallout from his Times piece. His campaign coffers have also benefited, with his raising roughly $200,000 since the op-ed controversy for a reelection race this fall in which he has no Democratic challenger.

His campaign arm will use the money in part to run ads against former vice president Joe Biden, the presumptive Democratic presidential nominee, in battleground states.

"Within a day it turned into something like a struggle session from the Cultural Revolution in Mao's China, where the adults had to prostrate themselves and apologize in front of the woke children that apparently now run the New York Times newsroom," Cotton said in a Fox News interview Monday.

Cotton's newly elevated folk hero status on the right stems from his call for President Donald Trump to invoke the Insurrection Act, a law more than two centuries old that allows a president to send in troops to deter an "insurrection" in states against its government. The senator has argued that active-duty troops should work with local law enforcement authorities to contain violent and other criminal activity - a presidential power that Trump has warned he would deploy but that has met with opposition from his defense secretary, Mark Esper.

Few of Cotton's colleagues have endorsed using the Insurrection Act at this point. Sen. Lindsey Graham, R-S.C., another close Trump confidant in the Senate who at times has found himself at odds with Cotton, has said it would only be appropriate as a last resort.

But the conflicting views within the GOP on the issue have largely been overshadowed by the unified pleasure that Republicans have taken from Cotton's trolling of the left.

Josh Holmes, a former chief of staff to Senate Majority Leader Mitch McConnell, R-Ky., said Monday that Cotton's actions in recent days have put him at the top of front-runners for the GOP presidential nomination in 2024.

"One of the qualities that Republican voters most appreciate about President Trump is his ability to unmask the motives of his opponents," Holmes said. "Tom Cotton has that same ability to drive his opponents so crazy that they reveal their darkest secrets in public."

He added: "The metaphorical time bomb he left inside the New York Times opinion page last week is a perfect example of the kind of thing that gets many conservative voters excited."

Elected as part of the class of 2014 that flipped control of the Senate to Republicans, Cotton is up for reelection but has no opponent. Democrat Josh Mahony abruptly withdrew after it was too late for his party to replace him on the ballot.

Freed from the constraints of having to aggressively campaign for a second term, Cotton is using his financial resources in an unusual fashion for a senator: Running ads against Biden.

In March, Cotton ran ads in Ohio ahead of the state's primary claiming that Biden was weak on China. Cotton's political arm will launch another digital ad campaign this week, questioning whether Biden is capable of taking a tough stance on China, while highlighting some of the former vice president's verbal gaffes, according to a political adviser for the senator.

The digital ads, which will run in Michigan and Iowa, are five figures, according to the adviser, who spoke on the condition of anonymity to describe a campaign that has yet to begin. But the relatively small ad campaign is meant not only to boost Trump's reelection chances in key battlegrounds and bring attention to the China issue, but also for Cotton's political team to test messages against Biden and see what attack lines resonate with voters.

"They will often rely on Tom to deliver kind of a harsher, negative message and Tom is willing to do that," the adviser said.

"Tom Cotton is desperately trying to do two things, distract voters from the damage Trump's failed leadership has done to this country and get Trump to tweet something nice about him," said Josh Schwerin, a spokesman for the Democratic group Priorities USA. "The fact that he's doing it in states like Ohio and Iowa, states that are only in play because of Trump's weaknesses, makes it that much worse."

Cotton has certainly not concealed his broader political ambitions.

At the Republican National Convention four years ago, Cotton made sure to appear before delegations from Iowa, New Hampshire and South Carolina - three critical early-nomination states - as well as meet with GOP leaders from Florida and Ohio.

At a lunch with Iowa Republicans, Cotton boasted that he loves the state so much "that I married a girl born in Iowa." With delegates from New Hampshire, Cotton noted his fandom of the New England Patriots. And at both appearances, he mocked Democrats and sidestepped mentions of Trump, who at the time had been struggling to coalesce broad support from the party.

But with Trump in the White House, the senator has become a stalwart ally - even as the two men have sometimes differed on policies such as an overhaul of the prison system that has been one of Trump's key bipartisan legislative achievements. Cotton, who once argued that the United States has an "under-incarceration" problem, led efforts to kill the legislation.

The senator is currently drafting a symbolic resolution that says the Senate opposes efforts to defund the police and argues that doing so "would leave police departments understaffed and undertrained while also increasing the risk of violent crime to our communities," according to a copy of the measure.

Cotton would consider serving in the Cabinet in a second Trump administration, according to a person close to the senator who spoke on the condition of anonymity to talk frankly. The Harvard Law graduate, who is also a veteran of the wars in Iraq and Afghanistan, positioned himself as a vocal national security hawk early in his Senate tenure when he authored a letter to Iranian leaders meant to try to scuttle a nuclear deal that the Obama administration had been negotiating at the time.

The missive infuriated Democrats but garnered support from most other Senate Republicans. And on Monday, Cotton was back to being a familiar source of anger for congressional Democrats.

"Let me say to Mr. Cotton: Pick up any history book of America," said House Majority Whip James Clyburn, D-S.C., as he referred to the story of Sgt. Isaac Woodard, a black World War II veteran who was assaulted while in uniform by a police chief in 1946, leaving him permanently blinded. "Cotton is from Arkansas. He ought to be ashamed of himself."

A spokeswoman for Cotton declined to comment on Clyburn's remarks.