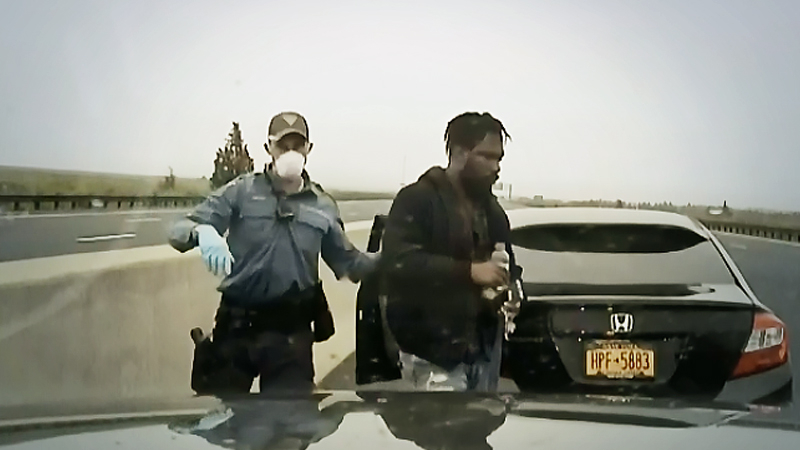 Maurice Gordon, of Poughkeepsie, N.Y., was pulled over May 23 for speeding by trooper Sgt. Randall Wetzel when his car became disabled in the left shoulder on the Garden State Parkway in Bass River, N.J., according to the attorney general's office, which is investigating the shooting. While they waited for a tow truck to arrive, Wetzel told Gordon to sit in his police cruiser to stay out of the way of traffic.

For a half-hour of dashcam footage, the stop was appeared routine. Wetzel got Gordon's information and called a tow truck. The trooper offered to drive Gordon to a car dealership and offered him a mask.

"I can give you a ride wherever you're trying to go," Wetzel told Gordon.

After 20 minutes of sitting in the patrol car, Gordon unfastens his seat belt and appears to get out of the car. Wetzel then yells "get in the car" several times while they seem to tussle outside the patrol vehicle.

The attorney general's office said Gordon tried to enter the driver seat of Wetzel's patrol car twice. The first time Wetzel pepper-sprayed him and the second instance Wetzel pulled Gordon out of the driver's seat and during the struggle shot Gordon six times.

The time between when Gordon exited the car and when his body collapsed onto the road was more than a minute.

Audio and video recordings released are a part of the attorney general's investigation into the use of force. New Jersey law requires that these recordings be released once the initial phase of the investigation is substantially complete, typically within 20 days.

But the videos weren't shared with Gordon's family before their public release, according to their attorney, William Wagstaff, who told The Washington Post on Monday that the family was planning the funeral arrangements for Gordon when they got texts from friends and family members about the videos.

"I just can't imagine the insensitivity," Wagstaff said. "They sat on this for two weeks. In the absence of media and the press putting pressure on the state of New Jersey to do the right thing, which is to allow the family to learn the circumstances of Mr. Gordon's death, they didn't even give the family a day."

A spokeswoman for the attorney general's office said they offered to show the family the videos at their office on Sunday and sent a link to the videos Monday morning before releasing the files to the public.

The footage of Gordon's death comes amid national outrage over the recorded killing of George Floyd in Minneapolis, who died two days after Gordon. Families of the unarmed black men have demanded the arrest of the officers, and protests across the country have demanded accountability for officers who use unnecessary force. Four former police officers have been charged in Floyd's death and could face up to 40 years in prison if convicted.

At a news briefing Monday, New Jersey Gov. Philip Murphy, a Democrat, announced that a grand jury would review the case to consider possible criminal charges.

"Police have a responsibility to protect the people they serve, and that demands a high level of accountability when things go wrong," Murphy said.

Amid the ongoing investigation and promised grand jury review, the family is left with mounting questions about how Gordon was shot during a routine traffic stop.

"I can't eat, I can't sleep and just want answers to what happened to my son at 6:30 in the morning," Gordon's mother, Racquel Barrett, said as she cried in an interview with The Wall Street Journal. "I don't know how I'm going to go on in life not hearing his voice."

In addition to the video of Gordon's death, the state's attorney released an audio recording of a 911 call from the day before. A friend of Gordon's in Poughkeepsie called 911 in the early morning, minutes after Gordon left his home, telling a dispatcher that he was concerned about Gordon's well being. He said Gordon started "to act a little weird" the day before and "said something about a paranormal experience."

After shooting Gordon, Wetzel radioed emergency communications and requested an ambulance. He told investigators that he thought Gordon was trying to take his gun and car, according to a report obtained by the New York Daily News.

Wagstaff said the framing of the release by the attorney general is questionable.

"They are already rushing to what appears to me to be spin, a narrative to defend the actions of the officer when you should be arresting the officer," he said.