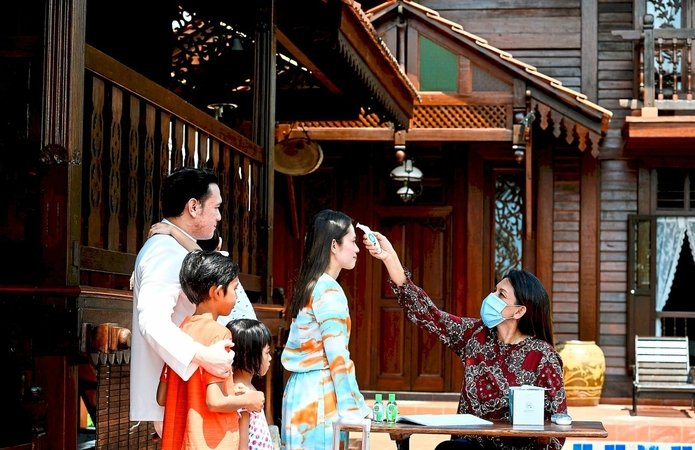 Trial run: Norhanom Mohd Anuar (right), an employee at Pondok Azzmo Guesthouse in Puchong, taking the temperature of a ‘guest’ in a mock exercise as they prepare to reopen.

PETALING JAYA: After months of inactivity, tourism players are now ready to open their doors again with the hope that the recovery movement control order (MCO) will live up to its name.

Malaysian Association of Hotels (MAH) chief executive officer Yap Lip Seng says the June 10 commencement of the next phase of the MCO will be significant for the tourism sector as it signals the beginning of the recovery of domestic tourism.

“Tourism stakeholders had long prepared for this day, particularly the hotel industry, which has its very own guidelines to ensure a clean and safe stay for tourists and other guests alike.

“Malaysian hotels are ready to receive and serve guests, and standard operating procedure (SOP) has always been part and parcel of hotel operations.

“In a recent survey we conducted, of the 402 hotels that responded, we recorded 96% adoption of SOP in reference to safety, health and hygiene practices for Covid-19, with the balance minority awaiting reopening of operations, ” he said.

The Hotel Industry of Malaysia MAH: Moving Forward report expects a “slow but steady demand” in the third and fourth quarter of the year for hotel bookings as people take advantage of hotel promotions in advance.

It said hotels in Perak, Pahang, Terengganu and Kelantan would see an earlier recovery once interstate travel is allowed as those states are highly dependent on the domestic market, while Langkawi and Sabah would be the last to recover as both are dependent on international tourists.

Muhyiddin also announced that interstate travel would be allowed.

Malaysian Association of Tour and Travel Agents (MATTA) president Datuk Tan Kok Liang said its members were prepared to accept bookings, noting that they had started working a month ago together with hotels on health and safety protocols.

“We hope consumer confidence will rebound and people will start to travel again, ” he said.

Tan said the packages that the tourism industry would offer in line with the new travel norms would cover nature, adventure, hiking, rural tourism and car rentals.

He added that MATTA would organise an online domestic travel fair in September followed by a physical fair if the situation in the country improves.

Tan hoped that the domestic travel market would restart with government servants and their families starting to travel as well as people utilising travel vouchers given by the government.

“MATTA will also propose to the Federal Government in the next budget on giving tax reduction for corporations that send their employees for meetings, trainings and conferences, ” he said.

Malaysia Budget Hotel Association (MyBHA) president Emmy Suraya Hussein said its members were “ready, orderly and are safe” to receive bookings as they had prepared for this day by following the government’s SOP.

“People will not immediately travel once the recovery MCO starts, but I believe people will return in a staggered manner from July. There will be people travelling but domestic travellers are still worried about their safety and health, ” she said.

Kedah and Perlis Malaysian Association of Hotels chairman Eugene Dass agreed that there would not likely be an immediate surge in hotel bookings.

However, the association believes things will pick up when ferry services become more frequent, attractions open up and flight connectivity improves.

Among the tax incentives include exemption on tourism tax from July 1 this year to June 30,2021, an extension of service tax exemption for hotels until June 30 next year, and extension of income tax relief of RM1,000 for domestic tourism expenses to Dec 31,2021.