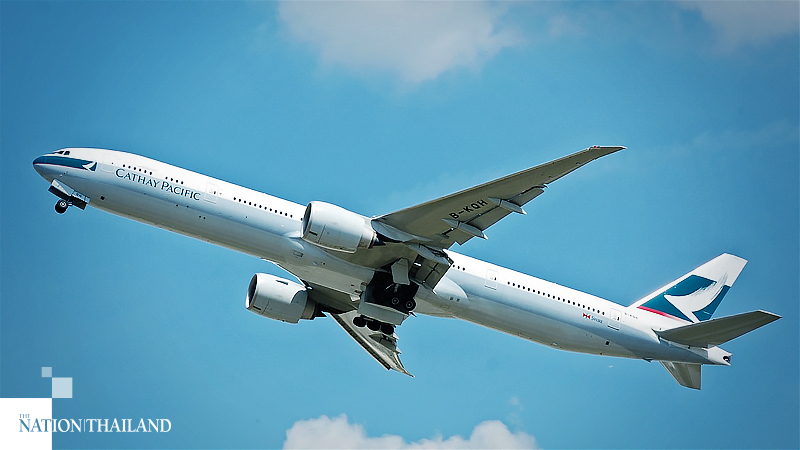 Cathay Pacific Airways announced a recapitalization plan worth HK$39 billion led by the Hong Kong SAR government on Tuesday to help the Hong Kong-based carrier weather a severe downturn in passenger business due to anti-government protests and the coronavirus pandemic.

The beleaguered airline will sell HK$19.5 billion of preference shares along with HK$1.95 billion of warrants to the government.

It also proposed a rights issue on the basis of seven rights shares for every 11 existing shares held to raise about HK$11.7 billion, Cathay said in a statement to the Hong Kong stock exchange on Tuesday.

The plans are subject to shareholder approval at an extraordinary general meeting around July 13.

Under the plan, the government would have the right to two non-voting observers at board meetings. Chan said they would be seasoned business professionals.

“The reality is that the recapitalization plan announced today is basically the only plan available to Cathay Pacific,” Chairman Patrick Healy said. “The alternative would have been a collapse of the company.”

After the completion of the recapitalization plan, Swire will own a 42.26 percent stake in Cathay and Air China will own 28.17 percent. The government will own 6.08 percent of Cathay through Aviation 2020 after the deal. 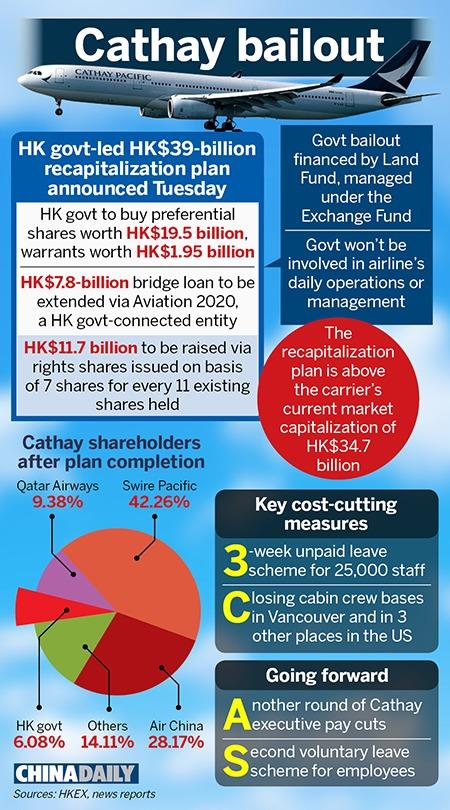 The airline reported an unaudited loss of HK$4.5 billion over the first four months of 2020 and saw a 99.6-percent plunge in passengers carried in April from the 3.12 million customers it carried in the same month last year, marking the steepest drop recorded by the airline.

Ronald Lam Siu-por, Cathay’s chief customer and commercial officer, warned last month of a “very bleak outlook for the coming months at least” due to the “biggest challenge to aviation we have ever witnessed”.

Cathay Pacific and its major shareholders Swire Pacific and Air China suspended trading of their shares in Hong Kong Tuesday morning ahead of the announcement.

“The rights issue will have a dilution effect and that’s going to be reflected in share prices when trading resumes,” Lau said.

Cathay will also implement another round of executive pay cuts and a second voluntary leave program for employees. The airline is losing as much as HK$3 billion a month.

“Tough decisions will need to be made in the fourth quarter of this year to get Cathay Pacific to the right size and shape in which to compete successfully,” Healy said. “Nothing is off the table.”

Healy and Chief Executive Officer Augustus Tang will take a 30 percent pay cut, and other executives as much as 25 percent. Other employees will be offered three weeks of unpaid leave to be taken over six months.

“These funds, along with other efforts like selling some of their planes and possible job cuts, could help tide them over for about 2 years,” said Shukor Yusof, founder of aviation consulting firm Endau Analytics in Malaysia. “But the long-term view of Cathay remains uncertain.”

The company may access equity and debt capital markets again to strengthen its balance sheet if conditions are right. Cathay shares are down 24 percent so far this year.

Airlines around the world have been searching for funds after the coronavirus slammed their operations. In Asia, Singapore Airlines Ltd raised S$8.8 billion (US$6.3 billion) in a rights issue last week and has since secured new credit lines and loans, while South Korean authorities are pumping another 1 trillion won (US$834 million) into Korean Air Lines Co., Yonhap News said. 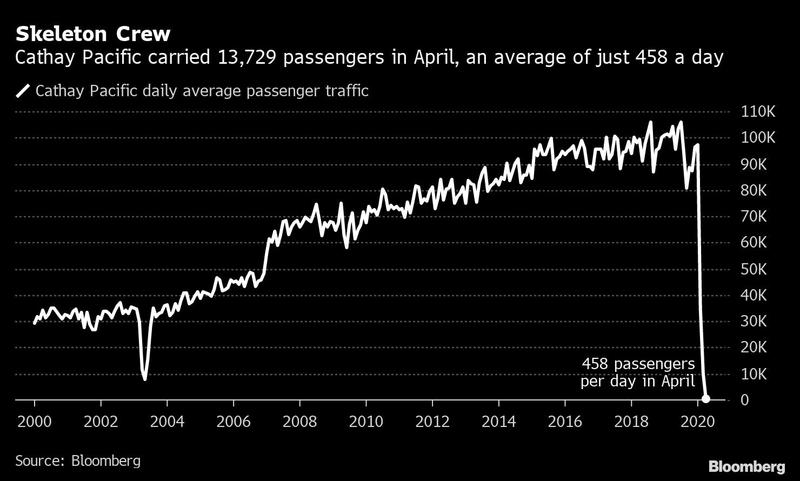 Major US carriers American Airlines Group Inc, Delta Air Lines Inc and United Airlines Holdings Inc are among those to have lined up billions of dollars in federal aid to help them through the crisis, which has led to a dramatic slump in passengers and routes flown.

In Europe, Deutsche Lufthansa AG has secured about US$10 billion in state support. Others including Avianca Holdings SA and Latam Airlines Group SA have filed for bankruptcy, while administrators are looking at bidders for Virgin Australia Holdings Ltd after it collapsed in April.

The International Air Transport Association last month said the global airline industry’s debt could swell by 28 percent to US$550 billion this year, which includes US$123 billion in financial aid from governments. The industry group expects airlines to burn through about US$60 billion of cash in the second quarter alone.

The pandemic has hit Cathay particularly hard because -- like Singapore Airlines -- it has no domestic market to fall back on, whereas carriers in the Chinese mainland are rebuilding capacity on flights within the mainland. Passenger revenue is about 1 percent of prior year levels, Cathay said. 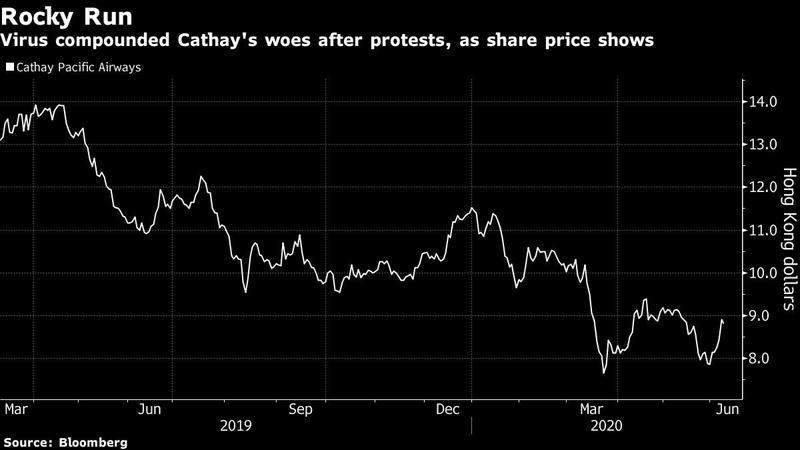 Even before the pandemic, Cathay was under enormous financial and political strains as it found itself caught up in the Hong Kong anti-government protests, which affected traffic numbers and led to the exit of the company’s former chief executive officer. Cathay was criticized for its response to the demonstrations.

Air China has owned about 30 percent of Cathay for more than a decade, while Swire, one of the last remaining British trading companies based in Hong Kong, has a 45 percent stake. Qatar Airways has a 9.99 percent holding.

Cathay and its Cathay Dragon unit posted an unaudited net loss of HK$4.5 billion (US$581 million) in the first four months of the year as their route network shrank to just 14 destinations. In April, the two carriers combined flew only 458 passengers a day, on average, and Cathay warned that international travel demand will take a few years to recover. Cathay also owns Hong Kong Express, a budget carrier that has grounded its fleet since March.

More than 25,000 Cathay staff agreed to take part in an unpaid leave program announced in February that required employees take three weeks off between March 1 and June 30. The acceptance rate was lower for crew and pilots, the most expensive employees, a person familiar with the plans said at the time. Cathay posted an unaudited loss of more than HK$2 billion in February alone.

Hong Kong has reported a total of 1,107 confirmed coronavirus cases and four deaths as of Monday. Globally, infections have reached more than 7.1 million with more than 400,000 deaths.