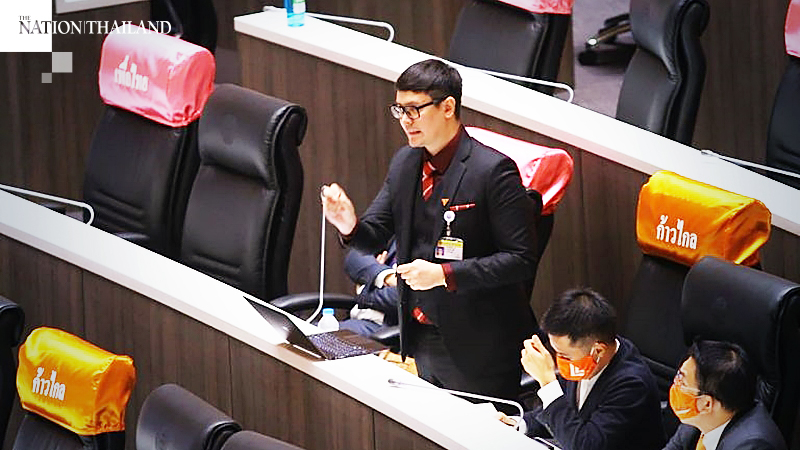 Move Forward Party MP Rangsiman Rome brought up the abduction of pro-democracy activist Wanchalearm Satsaksit in Cambodia during Wednesday’s (June 10) session of the House of Representatives.

Wanchalearm, a fierce critic of the government who has been in self-imposed exile since shortly after the 2014 coup, was dragged into a car by unknown assailants in Phnom Penh last week.

He was the latest in a string of Thai political dissidents to have vanished abroad, some of whom have later turned up dead.

“The government is like a donkey that needs to be whipped by society to do something about the disappearance of Wanchalearm and nine other activists [from Thailand abroad],” the opposition lawmaker said. “Now, we never get the truth explained.”

Justice Minister Somsak Thepsuthin, speaking for Prime Minister Prayut Chan-o-cha, said the Foreign Ministry and the Cambodian government had not clarified the situation, adding that Wanchalearm had not asked for help from the Justice Ministry, so he could not say anything on that matter.

However, he said the Justice Ministry will seek the truth behind the disappearance of the nine activists.

Meanwhile Foreign Minister Don Pramudwinai responded to Pheu Thai MP Somkid Chuakong’s query about progress case by saying the government was waiting for information from Cambodian officials, who began an investigation on June 10.

The government is ready to take care of Thai people living in other countries but some cases had not come to light, including that of Wanchalearm, he said.

He added that Wanchalearm was not a political refugee and his name was not listed by the UN Refugee Agency, so Human Rights Watch and Amnesty might be seeking attention for themselves by publicising his case.

Rangsiman said the answers from the government side were disappointing since they showed no concern for human rights.

The national police chief and Foreign Ministry are expected to give information on the activist’s disappearance on Thursday (June 11) and there will be further discussion with human rights organisations.