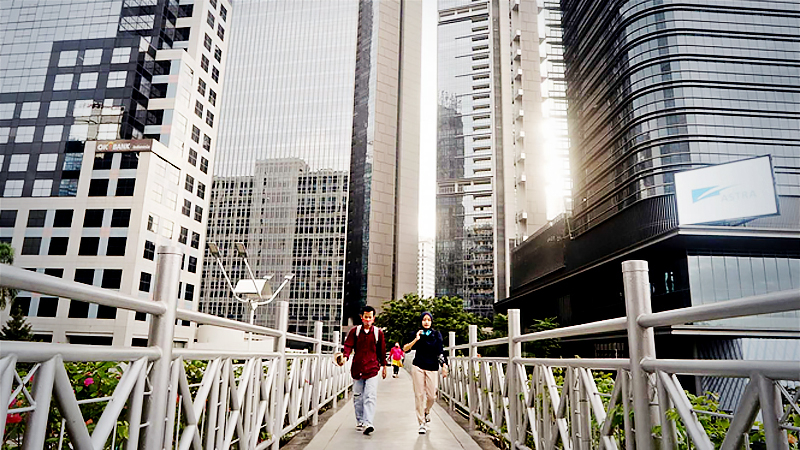 Pedestrians cross a footbridge on May 20 in the Sudirman Business District of Central Jakarta. The capital city has gradually started reopening economic activities in June while continuing to enforce social distancing and health protocols. JP/Dhoni Setiawan (JP/Dhoni Setiawan)

The government is pinning its hopes on restarting the economy to kickstart recovery, despite the latest surge in new COVID-19 cases and as sales continue to drop across various industries as a result of the large-scale social restrictions (PSBB).

Year-on-year (yoy) sales in several industries dropped sharply during the PSBB in May, with a notable plunge of respectively 87 percent and 93 percent in the airline and hotel industries, according to data from the Office of the Coordinating Economic Affairs Minister.

The special adviser to the Coordinating Economic Minister, Raden Pardede, said that the gradual reopening of the economy in June would fuel economic recovery following the second-quarter shrinkage.

“We are hoping for a V-shaped recovery or at least a U-shaped recovery, which will be supported by the state budget to fuel economic activities,” Raden told reporters on Tuesday, adding that strict health protocols would be critical in ensuring the safety of workers as the economy reopens.

Many observers have criticized the government on its policy to gradually reopen economic activities as taking a huge risk while the spread of COVID-19 has still not been brought under control.

On Tuesday, Indonesia recorded more than 1,000 new cases that brought the nation's cumulative total to more than 33,000 confirmed cases.

Southeast Asia’s biggest economy recorded 2.97 percent growth in the first quarter as the coronavirus emergency took a toll on the country’s economy to slow household spending and investments.

The government expects the economy to grow less than 2.3 percent this year, or shrink by 0.4 percent in the worst-case scenario.

In addition to the steep sales decline in the airline and hotel industries, sales nosedived in the services and retail industries by respectively 66 percent and 64 percent.

“We believe that the sharp fall [in sales] has hit bottom and [that] there will be signs of recovery in June as the country reopens its economy,” Raden said. “We are hoping to boost the economy to the pre-pandemic level, which will need the support of fiscal and monetary authorities.”

The government has unveiled a Rp 677.2 trillion (US$48.06 billion) stimulus package to strengthen the healthcare system and spur recovery, which it funded by raising the budget deficit cap to 6.34 percent of gross domestic product (GDP).

As many as four provinces and 11 regencies and municipalities on Monday implemented the PSBB to curb the coronavirus outbreak, which imposes a temporary closure on offices, factories, stores and schools.

Jakarta, the nation's capital and the epicenter of Indonesia's COVID-19 epidemic, was among the first regions to ease the PSBB and begin transitioning to the "new normal" phase this month. Jakarta is gradually reopening offices, public spaces, public transportation and other facilities in June.

Meanwhile, it is still enforcing compliance with social distancing and health protocols, which includes limiting groups of people to 50 percent capacity across all sectors.

The World Bank is now projecting Indonesia’s economy to grow zero percent as the global economy could shrink by 5.2 percent this year, the worst level since World War II and the weakest since the 1998 financial crisis.

“The main risk is that the pandemic will last longer and have deeper effects than anticipated,” the World Bank warned on Monday.

“The global recession would be deeper if bringing the pandemic under control took longer than expected, or if financial stress triggered cascading defaults.”