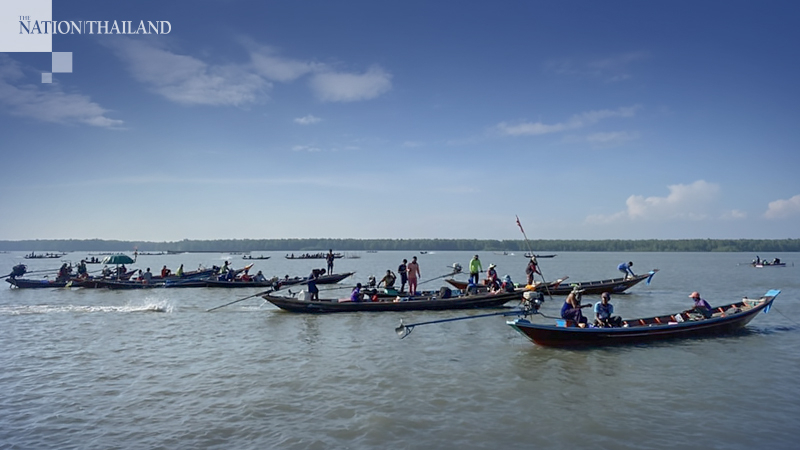 Some 30 boats were used to block access to Bandon Bay in Surat Thani on Friday (June 12) after officials announced a temporary ban on the harvesting of cockles or hoi kraeng, also known as blood clams.

Fishermen are calling on the authorities to come up with guidelines on exactly where small fishermen can harvest the shellfish.

The row between local fishermen and shellfish farmers over a fishing area extending from Tapee and Phunphin rivers in Surat Thani’s Phunphin district was sparked earlier this week, when farmers claimed the fishermen were harvesting shellfish on their property.

The farmers filed police complaints, claiming the cockles being farmed were not natural resources but a fruit of their investment.

The disagreement escalated, resulting in officials announcing a temporary ban on fishing in the disputed area since Thursday. Local shellfish buyers have also been urged to temporarily suspend their trade until the matter is resolved, while more than 30 police officers and Navy marines were dispatched to monitor the situation.

Surat Thani governor Witchawut Jinto said he has assigned Colonel Wasakorn Sunthornnant, deputy director of the Surat Thani Maritime Information Sharing Centre, to negotiate with the contesting parties and believes the matter will be resolved soon.

“The blockcade only allows small boats from entering the bay. This standoff has not affected cargo ships, as most are now docked at the pier,” he added.