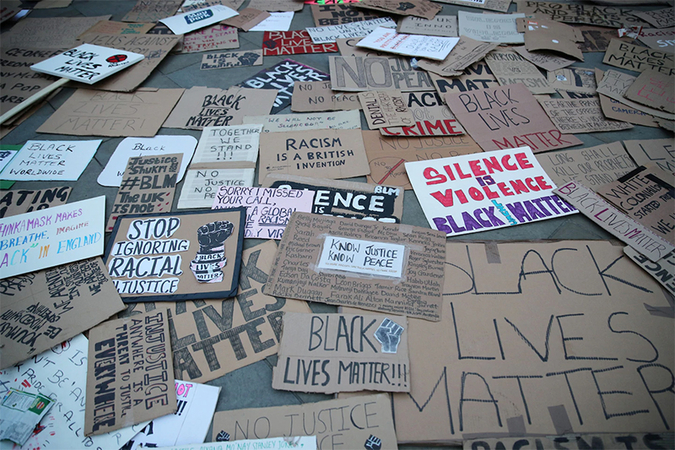 Tinder found itself in hot water on May 31, after pledging solidarity to Black Lives Matter in a tweet. The problem? People didn't believe it.

Dozens of users replied to the tweet with complaints that, following the death of George Floyd, they were banned from the popular dating app for mentioning Black Lives Matter in their bios. Indeed, asking others to donate to or educate themselves on the movement in exchange for a message had become something of a trend, but Tinder's bylaws don't support advocating for anything but your love life.

A week after its initial tweet and the subsequent backlash, Tinder announced it would un-ban those members and allow users to fundraise for Black Lives Matter.

"From time to time, our members use Tinder to engage with topics they care about," a spokesperson told BuzzFeed News. "And while our community guidelines state that we may remove accounts used for promotional purposes, we are dedicated to enforcing our guidelines in line with our values."

Welcome to the new(ish) frontier of online protesting.

Activists have used social media since its beginnings, and some are still going the traditional route. The hashtag #BlackLivesMatter was shared more than 8 million times on Twitter on May 28, up from 146,000 on Dec 4, 2014, the peak in the wake of Eric Garner's death. But what's different now is how many new platforms they have at their disposal, along with a deeper understanding of how to use existing ones - allowing online activism in the wake of George Floyd's death to take all sorts of creative forms.

On Sunday, 22,000 people around the globe who couldn't take to the streets in person gathered on the popular, quarantine-boosted video apps Zoom, Instagram and Facebook Live as part of a series of digital Black Lives Matter protests.

Others have used video in a more personal way. YouTuber Jo Franco posted a 20-minute video titled "Let's talk about RACE and how to be an ALLY." "I encourage you to have uncomfortable conversations with your white friends, with your white family, and ask them about the conversation of black people in America," says Franco, who is Afro-Latina. "The lifetime of discomfort that people of color deal with is nothing in comparison to five minutes" of discomfort.

"For most of my life, I truly believed that if I worked really, really hard, people wouldn't notice or judge me on the color of my skin," she says in the video. So, until now, Franco has made only one video "isolating my skin color." But this time, she told The Washington Post, "I couldn't not say something."

"The days leading up to making the video, I was just really, really sad. Grieving. I felt the pain of my ancestors," Franco said. "I went into my white friend's room ... and I said, 'I'm not OK.' And I just started sobbing. All of this heaviness is coming out from years of concealing these messed up things that have happened to me, and it's all pouring out right now."

The video resonated with Franco's fans and beyond, with everyone from "allies commenting to say how helpful it was" to fellow Afro-Latina and black viewers responding to say they identified with her message.

T. Greg Doucette, a North Carolina attorney, choose Twitter to launch a hefty project. He has created a thread of more than 440 tweets, each with a video showing an instance of police using force against protesters. He's been "sharing stories about police misconduct for years," he told The Post. "It's something that always pissed me off, and my self-therapy has always been to tweet about it."

But, he said, this thread marks the first time he's noticed people potentially changing their viewpoints, which he attributes to "the sheer volume of it."

Others have used counter-protesting methods by hijacking threads or hashtags connected to causes they disagree with. When #WhiteLivesMatter began trending, fans of Korean pop music - particularly fans of the boy band BTS - mobilized as a unit and swarmed the hashtag, using it while posting so many GIFs and music videos that it became irrelevant, a now commonplace technique.

"Most of these movements online tend to be very spontaneous, very organic," said Francesca Vassallo, a University of Southern Maine political science professor who studies protest movements. "Individuals who have seen some type of injustice genuinely want to help, so they participate."

In many cases, such as within the world of BTS fandom and the existing infrastructures accompanying it, these organic messages can spread quickly and efficiently. Other times, though, well-intentioned messages might transform as they reach broader audiences.

"How do you coordinate across groups, across regions, across platforms?" Vassallo added. "There are so many different accounts claiming to be organizers. That generally creates problems."

On Instagram in early June, music industry executives Jamila Thomas and Brianna Agyemang created a movement in which users would post the hashtag #TheShowMusicBePaused, both to call for their industry to pause work "in response to the murders of George Floyd, Breonna Taylor, Ahmaud Arbery and countless other Black citizens at the hands of police" and to urge people to donate to their families.

It morphed in to #BlackoutTuesday, during which people posted black squares to their Instagram accounts, a trend that was quickly criticized by some for blocking out useful information, to the point that actor Kumail Nanjiani tweeted, "If you are participating in this, don't use the tag #BlackLivesMatter. It's pushing down important and relevant content. Use #BlackOutTuesday." (The organizers, along with several others mentioned in this story, could not be reached for comment.)

Not all platforms are designed to promote social activism. TikTok, one of the globe's most popular social media networks, might be great for sharing short-form dance videos, but its algorithm makes it difficult for protesters to reach new audiences.

China's ByteDance, the company that owns TikTok, famously keeps its algorithm secret - making it tremendously difficult to crack. At the beginning of June, users convinced that more comments lead to more views left comments such as "for the algorithm" to promote a video that appeared to show a police officer in Richmond spitting on a detained protester. It went viral, prompting Richmond police to conduct a "slow motion analysis," which they said in a tweet "shows the officers spitting on the grass and not on the detainee."

Some argue the algorithm creates too much of a bubble effect, in which users may only see videos similar to others they've viewed. As BuzzFeed's Lauren Strapagiel discovered, it's entirely possible that a TikTok user might never see the hashtag #blacklivesmatter, even though it has more than 8.5 billion views. Plus, a glitch at the end of May caused the pages for #BlackLivesMatter and #GeorgeFloyd to display 0 views, even though they actually had billions.

TikTok released plans - detailed in a June 1 blog post titled "A message to our Black community" - to form a "creator diversity council" aimed at "recognizing and uplifting the voices driving culture, creativity, and important conversations on the platform."

Despite some of social media's challenges, it remains the most unfiltered way someone can immediately pass along a message.

"A lot of times I feel like the people I want to reach won't find me. And I'm always baffled when I post a video that's very specific, and it reaches those people," Franco said. "Showing people that they are seen is something you can do on social media that we didn't have access to before."