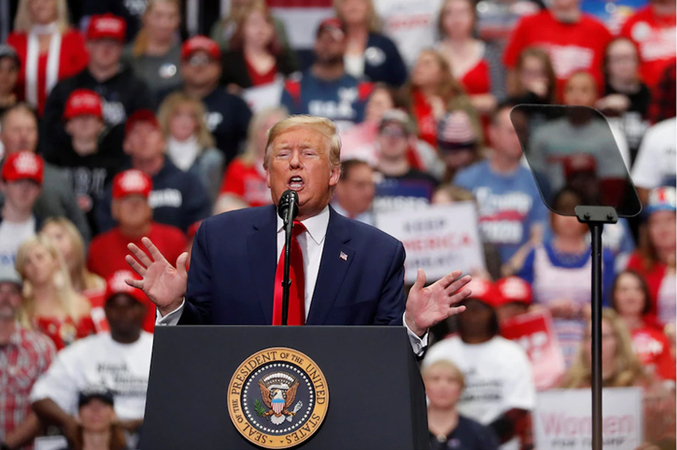 Public safety experts, business leaders and local officials expressed anxiety Friday that the decision to move most of the Republican presidential convention to Jacksonville, Fla., will needlessly endanger the health of participants and state residents already grappling with a record high number of new coronavirus cases.

"It's irresponsible," said Jacksonville City Councilman Garrett Dennis, a Democrat. "It will increase the number of covid infections and put the locals at risk."

"Anyone who is a thinking person would have concerns," said David Miller, a Jacksonville business leader who opposes the move. "It puts our community in harm's way. And it values political spectacle over sound decisions being made with the best interests of the health of our community."

The Republican National Committee announced Thursday night that it would change the location of its quadrennial event after officials in North Carolina refused to guarantee that President Donald Trump could accept his nomination in a packed arena in Charlotte. Officials there, who long planned to host the event, cited continued concerns about the novel coronavirus that has killed more than 110,000 Americans this year, but Trump and the RNC were insistent that he be allowed to speak before a crowded arena, with masks optional.

Trump is now expected to give his address Aug. 27 at Jacksonville's VyStar Veterans Memorial Arena, an indoor space that holds a maximum of 15,000 people. Far more visitors could arrive for the festivities that accompany conventions. Roughly 48,000 people flocked to Cleveland for the 2016 GOP convention.

Florida has seen a recent spike in infections as the state has relaxed restrictions and reopened businesses. On Friday the state reported 1,902 new coronavirus cases, a record high. Cases in North Carolina, Arkansas, Oklahoma and other states also have continued to surge.

But Trump has been eager to get back to in-person events and is planning large-scale rallies, with the first set to take place this Friday in Tulsa, Oklahoma. Health experts believe that there's a greater risk of contracting the virus in enclosed spaces such as those used for his rallies and convention events.

The president has remarked to allies in recent days that thousands of people protesting police brutality in cities across the country have disregarded social distancing guidelines and many have not worn masks. He also has told some that he does not believe his supporters will contract the disease at the convention - although guests at his Tulsa rally will be asked to hold the campaign blameless should they become ill after attending.

Aides who have talked to him about masks say he is derisive about their ability to prevent the spread of the virus - as federal health officials say they do - and does not like the idea of looking out during his address at a room filled with masked people.

"We can't do social distancing," Trump told North Carolina Gov. Roy Cooper on a call last month, according to two people familiar with the conversation. The president also insisted: "I don't want to be sitting in a place that's 50% empty."

Florida Gov. Ron DeSantis, a Trump ally, has been far more supportive and signaled in a call last month that Trump could have the kind of convention he wanted in Florida. Jacksonville Mayor Lenny Curry told reporters Friday morning: "Clearly, the RNC wants a large event with a lot of people. I want that too."

The RNC will not insist on social distancing inside the arena in Jacksonville, according to a Republican official with knowledge of the convention planning who spoke on the condition of anonymity to discuss deliberations. Masks will be offered but not required, the official said, and it will be "up to the person if they want to wear them."

Temperature checks will be done before guests enter the arena, hand sanitizer will be available, and the space will be regularly "fogged" with a solution to kill viruses, the official said.

There are no current plans for attendees to be tested for the coronavirus, which RNC officials had said they would do in North Carolina.

The RNC plans conflict with current Trump administration guidelines, including a directive issued by federal health officials Friday urging organizers of large gatherings that involve shouting, chanting or singing to "strongly encourage" attendees use cloth face coverings to reduce the risk of spreading the coronavirus.

Republican Party Chair Ronna McDaniel declined to say Friday whether attendees will be asked to sign a disclaimer indemnifying the party from liability should they get sick.

"We haven't even gotten there yet," McDaniel told Fox News. "I mean, as you can imagine, we've got 74 days to plan a whole new celebration in a different city."

McDaniel added that the party wants "to put the safety of convention-goers first and foremost" and will be "working with the president's team, with Secret Service, with the state of Florida to make sure that takes place."

Curry, the Jacksonville mayor, told reporters Friday that if infections rise as the date for the convention approaches, additional unspecified safety rules will be put in place.

"We have to adapt to keep people safe; we will put the safety of people first based on the information and data that I see now," Curry told local reporters. "I expect that this event is going to demonstrate that Jacksonville is back in business."

He added a note of optimism. "The status of covid-19, the risks of covid-19, what it will look like in late August will likely not look like what it does today," Curry said, referencing the disease caused by the coronavirus.

Others are not so sure.

More than 100 Florida doctors wrote an open letter to DeSantis on Friday urging him to require convention attendees to wear masks and practice social distancing and for its organizers to implement a rapid testing regimen in Jacksonville and the surrounding area.

"Florida does not have covid-19 under control," the letter, organized by the Committee to Protect Medicare, stated. Holding a convention without the proper safety precautions "will only increase the likelihood of community spread across Florida, strain our healthcare resources and put people in danger."

Florida Education Association President Fedrick Ingram issued a separate statement warning against holding the GOP convention. "It's hard to believe that anyone would think that it's a good idea to bring tens of thousands of people to Jacksonville from every corner of America just as Florida's schools are reopening in August," Ingram said. "We're not over this."

Florida leaders are also concerned that the timing of the event will deepen divisions in the city. Trump, who is seen by many critics as a racist, is set to give his major acceptance speech on the 60th anniversary of Ax Handle Saturday, when a mob of white townspeople chased a group of mostly black people through the city's streets and beat them with ax handles and baseball bats. The black residents had been protesting segregated lunch counters.

"It doesn't make any sense" said Florida state Sen. Audrey Gibson, a Democrat, on CNN. "It's disrespectful, and it's very callous."

Miller, the Jacksonville business leader, said the racial animus likely to accompany the RNC convention is another reason he opposed bringing it to the city. "We're doing a lot of work in our community now to repair and build race relations," said Miller. "The visual is one of divisiveness at a time when I think we need to be focusing on bringing people together."

He and others predicted significant protests will be held in Jacksonville during the convention. "We know what the president is all about," said Isaiah Rumlin, the chair of the local chapter of the NAACP. "I think you are going to see protesting going on through that week."

Paris Dennard, an RNC communications adviser for black media affairs, said in a statement that "while we cannot erase some of the darkest moments of our nation's past, we can denounce them, learn from them, fight for justice and a more perfect union for every America."

In North Carolina, Cooper's scheduled news conference focused largely on the increase in coronavirus cases in the state, not on the loss of most of the convention activities. (Some small meetings will take place because of already-signed contracts.) He was asked whether Trump plans a rally in the state.

"We are concerned when there are mass gatherings and large crowds because we see more viral spread when that occurs," Cooper said. "I have not heard anything from the president's campaign about any rally in North Carolina."