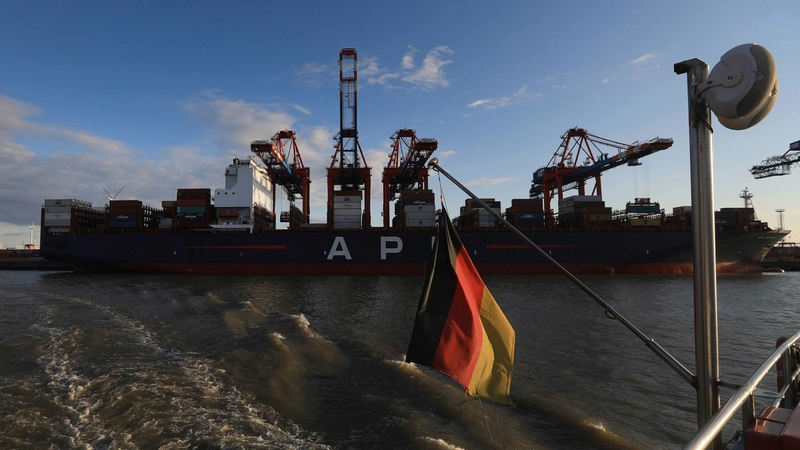 The German national flag flies from a sightseeing boat near conatainer ship 'APL Detroit' at the Port of Hamburg in Hamburg, Germany, on June 7, 2020. MUST CREDIT: Bloomberg photo by Krisztian Bocsi.

Germany pressed ahead with the implementation of a 130 billion-euro ($145 billion) stimulus package, as Europe's largest economy seeks a way out of the worst recession since World War II.

At a special meeting on Friday, Chancellor Angela Merkel's Cabinet signed off on numerous key initiatives agreed on by her ruling coalition last week. The goal is to get the bulk of the plan approved by parliament before its summer break, which typically begins a two-month recess in early July.

With exports tumbling and unemployment surging from the fallout of lockdowns to contain the coronavirus pandemic, the government is under pressure to act. Economy Minister Peter Altmaier said Friday that figures for May could be as bad as April, when industrial production took a record hit. A recovery is only expected starting in July, he added.

"Despite the gradual easing, the slump in sales in many industries is far longer than expected weeks ago," Eric Schweitzer, president of the DIHK business lobby, said in a statement. "The water is already up to the neck" of companies in hard-hit sectors such as travel and trade fairs.

A value-added tax cut designed to reinvigorate demand after weeks of curbs on public life is set to go into effect on July 1. Other measures the cabinet approved include emergency aid for small and mid-sized companies, a family bonus of 300 euros per child and changes to tax rules to changes to tax rules to encourage people to buy less-polluting vehicles.

"Our measures have punch," Finance Minister Olaf Scholz said in a press conference following the Cabinet meeting. "We want to come out of this crisis with full strength."

To pay for the massive stimulus package, the government intends to increase borrowing this year by at least 30 billion euros, people familiar with the plan have said.

A supplement to the 2020 budget to pave the way for the borrowing will be decided next week, Scholz said, declining to comment on the size. The move also requires parliamentary approval.

After years of budget surpluses and restrained spending, Germany has reduced debt from over 80% of gross domestic product in the wake of the 2008 financial crisis to around 60%, giving it room for extra borrowing, according to Scholz.

Germans broadly back the latest stimulus package, according to a survey published Friday. Among 1,270 voters polled for broadcaster ZDF, 68% said they think the measures are positive and half think the right amount is being spent. However, 85% said they don't believe that the sales-tax reduction will do much to lift the economy.

Even if the stimulus package were implemented in full, the economy is projected to shrink by 8.1% this year, according to the Berlin-based DIW institute. That's worse than the Bundesbank's prediction of -7.1% and the OECD's -6.6%. Altmaier said there was no reason to update official government forecasts for now.

While Germany has kept the coronavirus in check in recent weeks, a second wave of infections is unavoidable, according to Lars Feld, the country's top economic adviser.

"The goal is to avoid a lockdown during a second wave," Feld said in a Bloomberg TV interview. "Then we perhaps don't even need a second or a third package of fiscal stimulus."

Recent figures suggest that there's a pick up in the economy from the low in April, "so it very much looks like we can realize a V-shaped scenario and then avoiding a second leg lockdown will be sufficient," he added.

That might be too late for some companies. Auto suppliers have been particularly hard hit by the collapse in demand and have fewer resources than carmakers to weather a prolonged downturn.

"Our industry has suffered a cardiac arrest in Europe," Elmar Degenhart, chief executive officer of German auto-parts giant Continental AG, told news agency DPA in an interview. "Such a cardiac arrest cannot be remedied with a high dose of vitamin C - what is needed is a defibrillator."