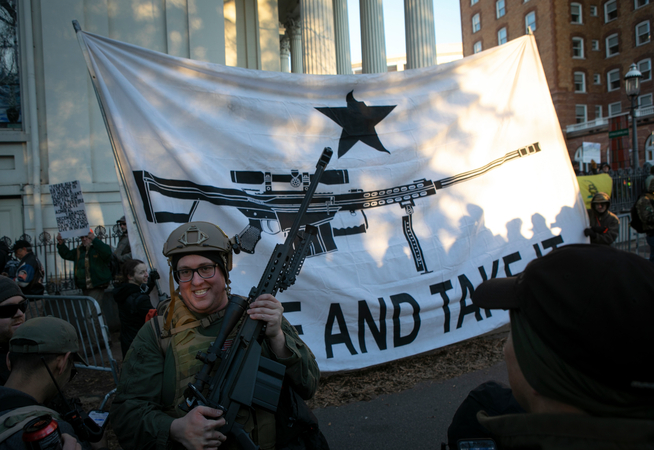 The court did not accept a batch of nearly a dozen cases that gun groups had hoped the court, fortified with more conservative members, might consider. Among them were cases involving restrictions in Maryland and New Jersey to permits for carrying a handgun outside the home.

The court earlier this term had dismissed a challenge from New York about transporting guns, and three justices objected, with the newest, Justice Brett Kavanaugh, adding that it seemed likely lower courts have been too quick to uphold state and local gun control measures.

Although he agreed the New York case was moot, he added that he shared the "concern that some federal and state courts may not be properly applying" the Supreme Court's decision recognizing an individual's right to gun ownership.

"The court should address that issue soon," he wrote.

"This court would almost certainly review the constitutionality of a law requiring citizens to establish a justifiable need before exercising their free speech rights. And it seems highly unlikely that the court would allow a state to enforce a law requiring a woman to provide a justifiable need before seeking an abortion," Thomas wrote, regarding the New Jersey case.

"But today, faced with a petition challenging just such a restriction on citizens' Second Amendment rights, the court simply looks the other way."

The court's most conservative members at various times have expressed frustration that their colleagues have routinely turned down requests to evaluate laws that impose tough restrictions for permits to carry guns outside the home and ban certain types of weapons.

The reluctance to reenter the gun control debate was almost entirely due to retired justice Anthony Kennedy. He was part of the court's 5 to 4 majority in 2008's landmark District of Columbia v. Heller decision, which said the Second Amendment provided a right to gun ownership for personal protection apart from military service. But Kennedy had also insisted in language that presumed states and localities still had leeway to pass gun restrictions.

Lower courts have pointed to that to uphold many restrictions, and overturn very few.

But Kavanaugh's replacement of his old boss Kennedy was thought to change the dynamic on the court. Kavanaugh was suspicious of gun restrictions while a judge on the appeals court, and the National Rifle Association was an enthusiastic backer during his selection and nomination by President Donald Trump.

The New Jersey law requires individuals seeking a permit to carry a handgun in public to show a "justifiable need" based on a special danger.

But the U.S. Court of Appeals for the 3rd Circuit has deemed New Jersey's process lawful since 2013. The long-standing regulation "did not infringe on the Second Amendment's guarantee," the court said.

The case is Rogers v. Grewal.

Maryland's law requires applicants for permits to carry handguns outside the home show a "good and substantial" reason. The state says that most who apply are able to make such a showing.

The U.S. Court of Appeals for the 4th Circuit assumed the Second Amendment covered the right to carry a gun outside the home, but said the state's system of review by law enforcement and an appeals board satisfied balanced the state's interest in public safety with the rights of gun owners.

The case is Malpasso v. Pallozzi.