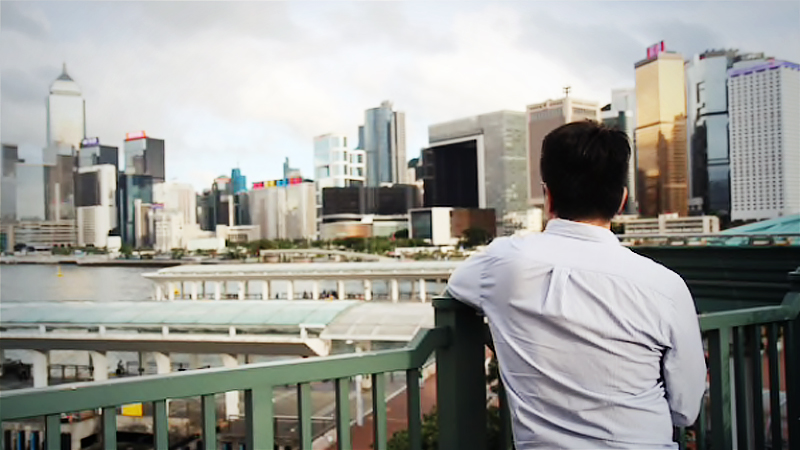 Ho, in his 40s, plans to give up his job in Hong Kong's financial sector, and move with his family to Taiwan. MUST CREDIT: Washington Post photo by Shibani Mahtani.

Her father, Guo Yao, fled forced labor and the violent purges of the Cultural Revolution for a better life in Hong Kong, where he arrived with his wife in 1973 to find relative freedom and prosperity.

Years later, as his family watched the ceremony marking Hong Kong's 1997 handover from Britain to China, his then-teenage daughter had a premonition.

"I thought to myself, maybe one day we will have to run away from the Chinese Communist Party again," said Leung, now 36. "I just didn't imagine it would be this soon."

Now, 17 years after the death of her father - whose name means "glory to the nation" in Mandarin - Leung is preparing to flee Hong Kong. A new law approved by the Communist Party to take effect this summer will allow China's powerful state security agencies to operate in the territory, paving the way for political purges and intimidation of government critics by secret police. Officials are pushing to impose party propaganda in schools.

With their political freedoms deteriorating, nurses, lawyers, business people and other skilled workers are rushing to renew documents that could provide a pathway to residency in Britain, or finding ways to emigrate to Taiwan, Canada or Australia.

Applications for police certificates required to emigrate soared almost 80% to nearly 21,000 in the latter half of 2019 from a year earlier, even before the advent of the security law, coinciding with a crackdown on pro-democracy protests. Animal rescue groups have reported an increase in surrendered dogs as their owners leave Hong Kong. Protesters fearing persecution have sought refuge in Germany, the Netherlands and United States.

The exodus of talent recalls the pre-handover years, when anxiety over Beijing's rule drove tens of thousands of people out of Hong Kong. Many eventually trickled back, having obtained second passports as insurance, when the initial period of Chinese control seemed relatively benign.

This time is different; many say they have no plans to return and see little hope for a better Hong Kong. Those preparing to leave say they are wracked with guilt about abandoning their home at a pivotal moment, yet deeply worried about their futures and those of their children if they were to stay.

Families spoke to The Washington Post on condition of partial or full anonymity for fear of retribution from the authorities or their employers.

"This is not a happy thing," said Law, a 40-year-old business executive who plans to move with his family to Taichung, Taiwan, when travel restrictions for the novel coronavirus ease. "It isn't like we will have a farewell party to celebrate. I feel a bit ashamed, like I've betrayed the protesters."

Beijing in recent weeks has redrawn its relationship with Hong Kong, whose autonomy and political freedoms it previously promised to preserve until 2047.

Facing widespread resistance to its encroachment, the party has moved to quash dissent with the security law, which Western governments have said violates the handover agreement and the "one country, two systems" model it established. Washington has said it will no longer treat Hong Kong as distinct from China, and has begun to rethink the special trade status that helped Hong Kong flourish as a financial center.

Zhang Xiaoming, deputy director of China's Hong Kong and Macao Affairs office, last week likened the security law to "anti-virus software" and said forces in Hong Kong are trying to subvert Communist rule - emphasizing that Beijing now sees the city as a restive region that must be controlled.

The law will criminalize "foreign interference" - a broad phrase that legal experts say could ensnare anyone with ties to a foreign political party. That would be problematic for Chris Yeung, Leung's husband, who is an overseas member of Britain's Liberal Democrats. In the neighboring Chinese territory of Macao, which passed similar laws in 2009, such an affiliation carries a maximum 25-year prison sentence if China deems it to endanger national security.

Yeung, a dual Canadian and British citizen, and his wife had previously discussed an exit plan if the "metaphorical nuclear plant explodes" in Hong Kong, she said. That conversation became more serious last June, when protests erupted over a bill that would have allowed extraditions to mainland China. Leung watched political divisions deepen and young people turn into fighters armed with petrol bombs as the police beat them bloody on the streets.

Leung had been prepared for her husband to run afoul of the law over his activism. But when he was arrested in September for participating in an anti-government protest - and denied legal access for hours - it was their first indication that rule of law was crumbling.

The national security law "has changed everything, we now realize that each and every one of us can be the target," said Leung, who works in business development. The family plans to move to Vancouver, but has not settled on a departure date.

"There's no hope for any reconciliation," Leung said. "Even if we love our city so much, the reality is that our government hates us."

The Law family began devising exit plans last year. The business executive's wife, a 38-year-old broadcast producer, was documenting demonstrations one day when police sprayed protesters with a chemical-laced liquid from a water cannon, leaving a 14-year-old demonstrator writhing in pain as the substance burned her skin.

"And there is nothing I can do to protect her," she said. "What else can you do but leave?"

The Laws, together with three other families, met an agent who helped them gain Taiwan residency under an investment program. Documents in hand, they can leave when pandemic travel curbs end.

Still, they have agonized over the decision.

"Deep down, I feel very selfish," the broadcast producer said. "The only thing I can do is to raise my children in a land of freedom under the air of democracy. And hope that one day, whether they come back or not, they will remember their roots are in Hong Kong."

Others have wrestled with similar anguish. When Ho, a nurse at a hospital rehabilitation ward, joined a strike this year to pressure the Hong Kong government to close its border with China during the coronavirus outbreak, she did not fear payback. In the worst case, she figured, she could quit.

Now, with the security law looming, she fears a political purge.

"You don't know what they can accuse you of under the new law," Ho said. "Would joining a strike be considered a subversion of state?"

The family is applying to emigrate to Taiwan through its program for foreign professionals, while her husband stays for a few months longer to support them with his job at Hong Kong Exchanges and Clearing, the stock market operator.

Their departure is so hurried that Ho has yet to assess school options for her two children. Her husband does not know what he will do in Taiwan, which lacks a financial sector comparable with Hong Kong's. But even working at a restaurant would be acceptable. "Having my freedom of speech is worth more," he said.

Among their friends, mostly well-educated professionals with children, nine out of 10 have left or are in the process of leaving, he said. At the Hong Kong Exchange, his colleagues who have dual citizenship are assessing their options, while others are making plans to procure foreign residency.

"It has become the norm. We are the last to go," he said. "In many ways, it feels like we are refugees, fleeing a war."