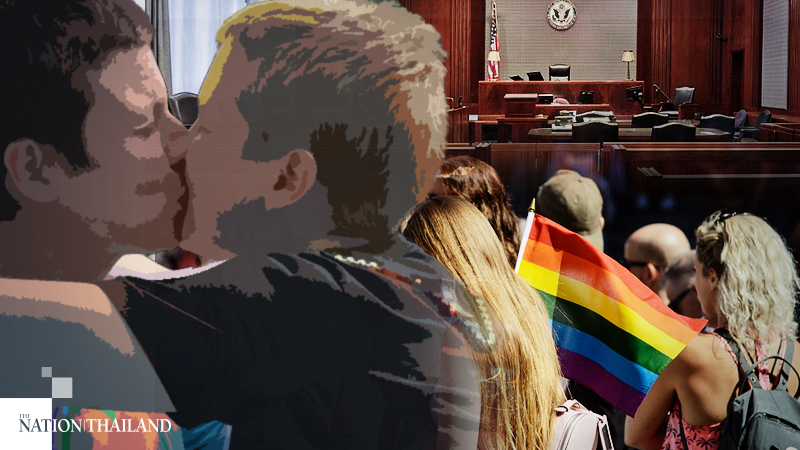 WASHINGTON - The Supreme Court ruled Monday that a landmark federal civil rights law from the 1960s protects gay and transgender workers, a watershed ruling for LGBTQ rights written by one of the court's most conservative justices.

Justice Neil Gorsuch and Chief Justice John Roberts joined the court's liberals in the 6-to-3 ruling. They said Title VII of the Civil Rights Act of 1964, which prohibits discrimination "because of sex," includes gay and transgender employees.

The decision was a surprise, and not the only one of the day. Even though the court's conservative majority has been strengthened, it announced Monday that it was turning down a batch of challenges from gun rights groups eager to expand Second Amendment rights. And it rejected the Trump administration's request to review California's attempts to provide sanctuary to undocumented immigrants.

The court's LGBTQ rights ruling is the major decision of the term so far and illustrates the difficulty of predicting how the independent-minded court will rule. Over the next several weeks, the justices will announce the fates of the program extending protection from deportation to undocumented immigrants brought to this country as children, a Louisiana law restricting abortion access, three cases important to religious conservatives, and President Donald Trump's ongoing battle to keep his private financial records from Congress and a New York prosecutor.

Providing additional interest to Monday's decision was its author. Gorsuch, Trump's first appointee to the high court, is such a favorite of conservatives that "But, Gorsuch" has become a catchphrase among those who are not enamored of the president but love his judicial choices.

But the 52-year-old from Colorado signaled during oral arguments that he thought the text of the law - "because of sex" - favored the plaintiffs' interpretation, and his straightforward opinion read in places as if inspired by their briefs.

"We must decide whether an employer can fire someone simply for being homosexual or transgender. The answer is clear," Gorsuch wrote. "An employer who fires an individual for being homosexual or transgender fires that person for traits or actions it would not have questioned in members of a different sex. Sex plays a necessary and undisguisable role in the decision, exactly what Title VII forbids."

Gorsuch and Roberts - the chief justice was on the losing side when the court voted 5 to 4 five years ago that the Constitution provided a right for gay people to marry - were joined by liberal Justices Ruth Bader Ginsburg, Stephen Breyer, Sonia Sotomayor and Elena Kagan.

"This is a huge victory for LGBTQ equality," said James Esseks of the American Civil Liberties Union. He added: "The Supreme Court's clarification that it's unlawful to fire people because they're LGBTQ is the result of decades of advocates fighting for our rights. The court has caught up to the majority of our country, which already knows that discriminating against LGBTQ people is both unfair and against the law."

Many conservatives were appalled by the decision, including some who had worked the hardest for Gorsuch's confirmation.

"Justice [Antonin] Scalia would be disappointed that his successor has bungled textualism so badly today, for the sake of appealing to college campuses and editorial boards," said Carrie Severino of the group Judicial Crisis Network.

"You can't redefine the meaning of words themselves and still be doing textualism," she said. "This is an ominous sign for anyone concerned about the future of representative democracy."

Trump, whose administration has moved to ban transgender service members and recently backtracked on medical protections for gay and transgender Americans, was silent about the decision for much of the day, and then ambivalent.

"Today's Supreme Court decision is a momentous step forward for our country," Biden said in a statement. "Before today, in more than half of states, LGBTQ+ people could get married one day and be fired from their job the next day under state law, simply because of who they are or who they love."

He signed off: "Happy Pride!"

Before lower courts began to change past rulings, judges for 50 years had interpreted Title VII's prohibition on discrimination because of sex to mean only that employers could not treat women worse than men, and vice versa, not that discrimination against LGBTQ employees was prohibited.

That is the view of the law the Trump administration advanced, and that dissenting Justices Clarence Thomas, Samuel Alito and Brett Kavanaugh embraced.

The dissenters said their colleagues were changing the law, not interpreting it.

Regardless of whether LGBTQ workers should be protected, Kavanaugh wrote, "our role is not to make or amend the law. As written, Title VII does not prohibit employment discrimination because of sexual orientation."

Alito said the effects of the decision would be far-reaching and impossible to predict.

One example he provided: "For women who have been victimized by sexual assault or abuse, the experience of seeing an unclothed person with the anatomy of a male in a confined and sensitive location such as a bathroom or locker room can cause serious psychological harm."

He said the majority did not address how the ruling would affect housing, religious employers or sports.

"The entire federal judiciary will be mired for years in disputes about the reach of the Court's reasoning."

Gorsuch agreed that the ruling addressed only the issues that sprung from the employment discrimination the law addresses, but said that the most important step was to provide a clear answer to that.

"It is impossible to discriminate against a person for being homosexual or transgender without discriminating against that individual based on sex," Gorsuch wrote, and loaded his opinion with common examples.

"Consider, for example, an employer with two employees, both of whom are attracted to men. The two individuals are, to the employer's mind, materially identical in all respects, except that one is a man and the other a woman. If the employer fires the male employee for no reason other than the fact he is attracted to men, the employer discriminates against him for traits or actions it tolerates in his female colleague."

It was exactly the message that lawyers for the gay and transgender employees had made.

Gorsuch acknowledged that lawmakers in 1964 probably were not intending to protect gay and transgender workers. But the words of the statute they wrote do that, he said.

"Likely, they weren't thinking about many of the Act's consequences that have become apparent over the years, including its prohibition against discrimination on the basis of motherhood or its ban on the sexual harassment of male employees," he wrote. "But the limits of the drafters' imagination supply no reason to ignore the law's demands."

He said the decision was narrow - "we do not purport to address bathrooms, locker rooms, or anything else of the kind" - and that there might be constitutional protections or other federal laws shielding religious employers, but that also was not before the court. "How these doctrines protecting religious liberty interact with Title VII are questions for future cases too," he wrote.

Kelly Shackelford, president of the conservative First Liberty Institute, said in a statement: "We are grateful that the Supreme Court was clear in the opinion that this federal statute does not overrule peoples' religious freedoms. We will find out in the very near future whether this is a hollow promise or a truthful assurance that the religious liberty of all Americans will be protected."

Major employers had urged the court to find that Title VII provided protection, and unions were happy as well. Jerame Davis, the executive director of Pride at Work, a nonprofit focused on LGBTQ employment rights funded by the AFL-CIO and other unions, said "the Supreme Court has seen our humanity."

Others found a symbolic importance to the decision beyond the employment aspects.

"It may prove very significant that the opinion implicitly takes seriously the idea that a person can transition genders," Sanders said in a statement. "That remains a controversial concept among many conservatives."

The court combined two cases to consider whether gay workers are protected under the law. Gerald Bostock claimed that he was fired from his job as a social worker in Clayton County, Ga., after he became more open about being gay, including joining a gay softball league. Donald Zarda said he was fired as a skydiving instructor after joking with a female client to whom he was strapped for a tandem dive that he was gay. (Zarda died in 2014.)

The transgender case was brought by Stephens, who worked for years at a Michigan funeral home before being fired after informing the owners and colleagues of her gender transition. Stephens died of kidney failure in May, after seeing her case argued at the Supreme Court in October.

Before her death, Stephens prepared a statement through the American Civil Liberties Union in anticipation of a possible ruling in her favor.

"Firing me because I'm transgender was discrimination, plain and simple, and I am glad the court recognized that what happened to me is wrong and illegal," she said. "I am thankful that the court said my transgender siblings and I have a place in our laws - it made me feel safer and more included in society."

The cases were the first the court heard since the retirement of Justice Anthony Kennedy, for whom both Gorsuch and Kavanaugh clerked.

Kennedy had written the majority opinion in all of the court's major cases that advanced gay rights, including the 2015 decision that said gay couples had the constitutional right to marry.

More than 70 friend-of-the-court briefs were filed in the discrimination case, dividing states, religious orders and members of Congress. More than 200 of the nation's largest employers supported the workers.

The Trump administration's position put it at odds with the Equal Employment Opportunity Commission, which decided in 2015 that gay and transgender people were federally protected.

Most appellate courts had come to agree with the EEOC, even when they had not done so in the past.