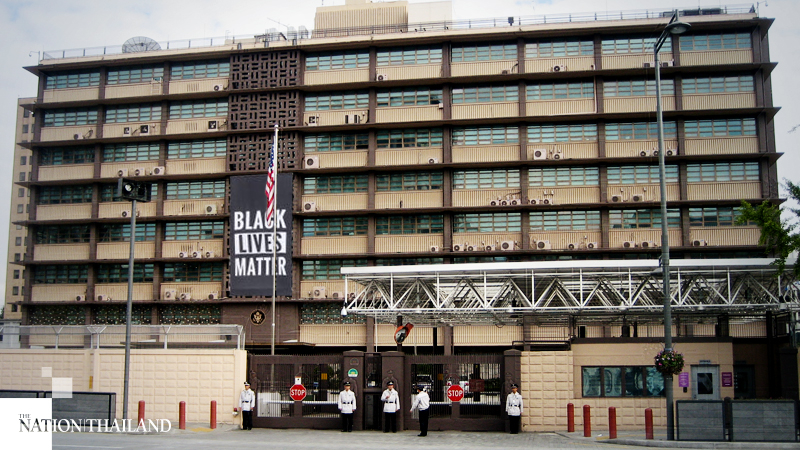 A Black Lives Matter banner was removed from the facade of the U.S. Embassy in Seoul on Monday, two days after it was unfurled in a show of solidarity with the anti-racism movement.

The banner and a smaller rainbow flag put up for Pride Month were replaced with a "We will not forget" banner, marking the 70th anniversary of the Korean War.

An embassy spokesman said U.S. Ambassador Harry Harris, a retired Navy admiral, ordered it taken down to avoid the "misperception" that taxpayer dollars were used to support an organization.

The ambassador had decided to display the banner "to communicate a message of solidarity with Americans concerned with racism, especially racial violence against African Americans," the spokesman said. "He wanted to highlight the enduring American values of racial equality, freedom of speech, and the right to peacefully protest.

"However, the Ambassador's intent was not to support or encourage donations to any specific organization. To avoid the misperception that American taxpayer dollars were spent to benefit such organizations, he directed that the banner be removed."

Bloomberg News reported that the banner was removed after Secretary of State Mike Pompeo and President Donald Trump expressed their disapproval upon seeing news coverage of the two-story-tall banner hanging behind the main flagpole displaying the U.S. flag. The State Department did not comment on the issue.

The banner, which also was displayed on the embassy's Web page, was the most dramatic and straightforward display of diplomatic support.

"The U.S. Embassy stands in solidarity with fellow Americans grieving and peacefully protesting to demand positive change," the embassy tweeted before the banner was removed. "Our #BlackLivesMatter banner shows our support for the fight against racial injustice and police brutality as we strive to be a more inclusive & just society."

Harris quoted both President John F. Kennedy and a eulogy to Martin Luther King Jr. in tweets accompanying a photo of the banner and posted on his ambassadorial Twitter account.

"Recent weeks remind us that MLK's work remains unfinished," he wrote. "Friends, I believe that work falls on each of us today."

South Korea has experienced a small but significant wave of support for the anti-racism campaign, from citizen activists to K-pop stars.

A week before the banner went up, about 100 demonstrators marched through downtown Seoul, holding slogans such as "Koreans for Black Lives Matter" and "Stop state violence against the people."

The rally's organizer, Shim Ji-hoon, said earlier that the U.S. Embassy's move struck him as "a pleasant surprise."

"While I welcome the Seoul Embassy's show of solidarity, I cannot but see an irony here," he said. "It makes me question, are American diplomats in Seoul breaking away from President Trump?"

Harris has been one of the most outspoken diplomats on the issue of racial injustice, often citing his personal history.

Earlier this month, he tweeted a photo of protesters outside the Seoul Embassy who were parading with the slogan, "US imperialism means 'I can't breathe!' "

Harris said in his tweet, "I disagree w/ these protesters but respect their right to peacefully protest here in democratic ROK," referring to the Republic of Korea, the official name of South Korea.

"I am deeply troubled about the events surrounding the brutal killing of George Floyd in Minnesota and the ongoing aftermath," he said in a statement attached to the tweet. " . . . As an Asian American who was reared in the segregated South of the 1960s, I never thought I would see this happening again, especially in the 21st Century."

As the protests against police violence, sparked by the killing of George Floyd in Minneapolis last month, have spread across the United States and the world, diplomats have faced sometimes uncomfortable questions from their counterparts and governments in the countries where they work.

Embassies have found a variety of ways to address the issue, some subtle and some blunt.

The U.S. Embassy in South Africa has posted the hashtag #BlackLivesMatter on its Web page above a quote from U.S. Attorney General William Barr.

"The outrage of our national community about what happened to George Floyd in Minneapolis is real and legitimate," Barr said, in part. "Accountability for his death must be addressed. . . . Justice will be served."

The U.S. Embassy in Nigeria saluted local protesters who marched on embassies in the region.

"They join many Americans who are similarly outraged by what transpired and we have seen them express their shock, grief, frustration, and anger in many parts of the United States," said a statement on the embassy website. "We in the U.S. Mission are not immune to these feelings and like the Secretary of State we find the actions that led to the death of Mr. Floyd abhorrent. His death was a tragedy and never should have happened."

Pompeo recently expressed his personal condolences to the Floyd family in a Fox News interview, calling the actions of the police officer who put his knee on Floyd's neck "abhorrent." But he has not spoken about the broader issue of inequality in the United States.

This is the second year that embassy actions were perceived as political in nature.

Last year, Pompeo ordered embassies not to hoist rainbow flags during Pride Month on the same flagpoles used to fly the U.S. flag. Many embassies host pride events to show support for LGBT rights, particularly in countries where discrimination is rampant. Some embassies bathed their embassies in multicolored lights or flew rainbow flags.

After Pompeo's order, some embassies - including the mission in Seoul - hung rainbow flags from the facades or posted photos from previous years showing them flying prominently outside. Pompeo took no action against those displays.