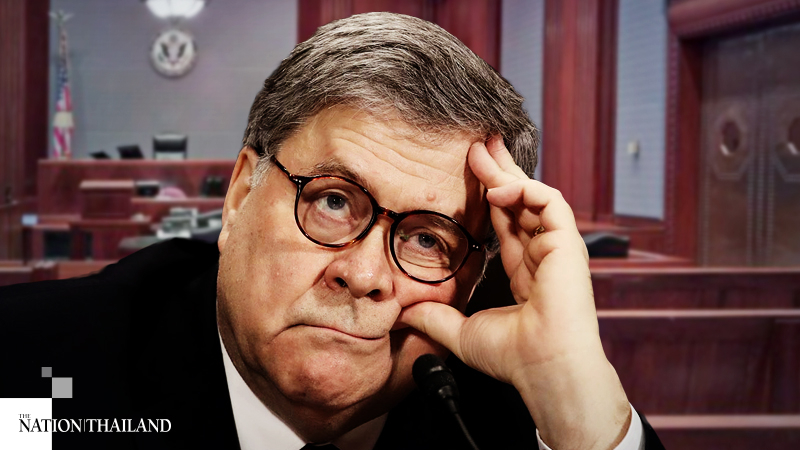 WASHINGTON - Senate Democrats on Monday asked the Justice Department's internal watchdog to investigate the role of Attorney General William Barr in the forceful clearing of largely peaceful protesters ahead of a photo op by President Donald Trump at a church near the White House.

In a letter to Michael Horowitz, the department's inspector general, 21 senators called the episode "alarming" and asked for an immediate look at Barr's role in directing what they described as "the use of tear gas or a similar gas, rubber bullets, pepper balls, and batons . . . to suppress peaceful protesters around Lafayette Square" on June 1.

"This misuse of force is all the more alarming given that the Attorney General appears to have issued this order to allow President Trump to walk across the street from the White House for a political photo op in front of St. John's Church," the senators wrote. "Notably, Attorney General Barr was not only on the scene less than an hour before the use of force to clear peaceful protesters, but he also participated in President Trump's photo op, posing for pictures in front of the church."

The concerns expressed by the senators, led by led by Mazie Hirono, D-Hawaii, echoes those contained in a letter last week to Horowitz signed by more than 1,250 former Justice Department employees.

The Washington Post has reported that Barr personally ordered that the crowd of protesters be pushed back as part of a plan hatched earlier in the day. According to a Justice Department official, law enforcement authorities, including Barr, had decided to extend the security perimeter outside the White House after earlier demonstrations, over the death of George Floyd in Minneapolis custody, turned violent.

In an interview with The Associated Press after the episode, Barr said he had asked that the perimeter be expanded but claimed he did not give the "tactical" order for federal law enforcement on the scene to move in.

Barr and other Trump administration officials have also insisted that the expansion of the perimeter around the White House was unrelated to Trump's photo op at the church, which took place less than an hour after the protesters were cleared from the area.

However, the accounts of more than a half-dozen officials from federal law enforcement, District of Columbia public safety agencies and the National Guard who were familiar with planning for protests outside the White House that day challenge that explanation, The Washington Post reported Sunday.

Asked on Fox News last week whether he would do anything different in Lafayette Square, Barr responded, "Based on what I know now, no."

Last week, Gen. Mark Milley, chairman of the Joint Chiefs of Staff, apologized for appearing alongside Trump after federal officials forcibly removed protesters from the area, saying it gave the impression of military interference in domestic politics. Defense Secretary Mark Esper, who also participated in the photo opportunity, has said he did not realize in advance what would be happening.

In their letter to Barr, the Democratic senators also ask Horowitz to investigate Barr and the Justice Department's role in deploying federal law enforcement "to seemingly suppress protests and intimidate protesters throughout the country who are peacefully exercising their First Amendment rights."

"In the wake of the brutal murders of George Floyd, Breonna Taylor, and Ahmaud Arbery, Americans all across our country are calling for an end to police brutality and a transformation of systems that perpetuate injustice and inequality," the senators said. "In response, President Trump has vowed to 'dominate' the protesters. The Attorney General and his Justice Department appear to be following through on the President's vow."

The senators also expressed concerns that federal officers were deployed in "generic riot gear without displaying any identifying insignia" and reports that the Justice Department has expanded "covert surveillance" on protesters.