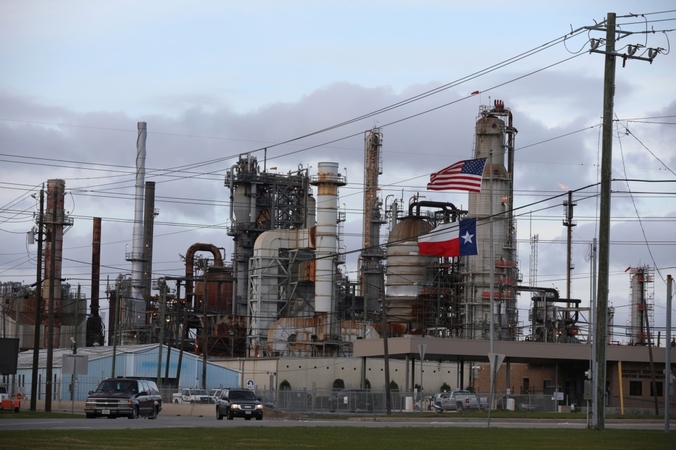 An American and Texas flag fly in front of a Chevron refinery in Pasadena, Texas, on March 8, 2020. MUST CREDIT: Bloomberg photo by Sharon Steinmann Location: Houston, United States

After flooding the U.S. with crude earlier this year, Saudi Arabia has all but cut off the taps to the American oil market.

The kingdom has exported just one cargo to the U.S. so far in June, equivalent to about 133,000 barrels a day, tanker-tracking data compiled by Bloomberg show. That's about one-tenth of the 1.3 million barrels a day it shipped in April, when Riyadh flooded the global market during a brief price war against Russia.

If the low pace of exports is sustained in the second half of the month, U.S. imports of Saudi crude could drop to the lowest level in 35 years, helping the American crude market re-balance, according to traders and analysts.

"Saudi oil arrivals will fall just as domestic refiners will start raising runs and domestic production continues to decline," said Amrita Sen, chief oil analyst at consultant Energy Aspects. "U.S. refiners will have to import from elsewhere and run down stocks," she added.

To be sure, several Saudi tankers haven't yet indicated their final destinations, so the final tally into the U.S. could be a tad higher. Yet the trend so far in June is unmistakable: The deluge of Saudi oil that threatened to overwhelm American refiners is dwindling. The April flood prompted U.S. politicians to complain loudly, with Senator Ted Cruz, a Texas Republican, tweeting in late April: "My message to the Saudis: TURN THE TANKERS THE HELL AROUND."

Saudi oil industry officials, speaking privately, say the kingdom is unlikely to boost shipments into the U.S. in the second half of the month and into July. By slashing U.S. crude exports, the Saudis can influence the most highly visible oil market in the world as American customs data allow for near real-time monitoring of shipments. Less Saudi petroleum is likely to reduce the closely watched American crude stockpiles, amplifying the price impact.

The recent inundation of Saudi crude in the U.S. is largely the lingering effect of a price war earlier this year. For much of 2019 and early 2020, Saudi Arabia shipped relatively little crude into America, with average arrivals running at about 475,000 barrels a day, according to U.S. government data. But that changed in April, when Riyadh opened the taps after failing to reach an agreement with its OPEC+ partners to cut production.

Saudi crude takes about 45 days to reach the U.S. Gulf of Mexico and the U.S. West Coast, so the impact of the April export flood wasn't felt until late May and early June, when U.S. imports of Saudi crude jumped to about 1.5 million barrels a day. As the Saudi tankers unloaded their cargo, U.S. crude stocks climbed to a record high, putting pressure on oil benchmarks.

In early April, once the devastation wrought by the coronavirus on oil demand became evident, the OPEC+ alliance set aside its differences, embarking on record output cuts. Riyadh cut oil shipments to the U.S. to 645,000 barrels a day in May, tanker-tracking data show. That drop would become apparent in the second half of June and early July as the vessels arrive on U.S. coasts.

The further export drop in the first half of June would become apparent in the second half of July. As of June 10, the U.S. had received almost 10 million barrels of Saudi crude, compared with 16.9 million barrels for all of June last year, according to U.S. Customs data compiled by Bloomberg and figures from the Energy Information Administration.

In addition to slashing U.S. shipments, the kingdom this month has curbed exports to China to about 1.3 million barrels a day through June 15, compared with almost 2 million on average in May. Exports to India and Japan have increased so far this month, however.