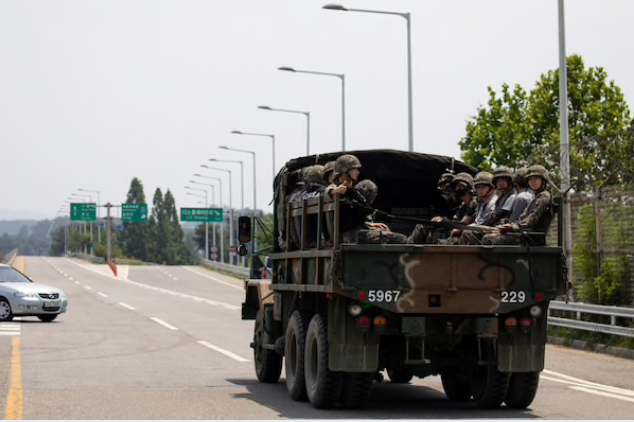 A military vehicle carrying Republic of Korea Army (ROK) soldiers travels along a road near the demilitarized zone (DMZ) in Paju, South Korea, on June 17, 2020. MUST CREDIT: Bloomberg photo by SeongJoon Cho.

Moon's office urged North Korea to tread carefully after the country reduced to rubble a $15 million liaison office set up north of the border in 2018 as a symbol of reconciliation. Earlier Wednesday, North Korean state media unleashed a fresh stream of threats and insults against South Korea and Moon, including a personal rebuke from Kim's sister, Kim Yo Jong.

"We warn that we will no longer tolerate North Korea's reckless words and actions," Moon spokesman Yoon Do-han told a news briefing Wednesday. South Korea gave no indications that the country would retaliate or that Moon would waiver from his goal of seeking cooperation with his neighbor.

South Korea funded the liaison office and opened it with great fanfare in the joint Kaesong industrial park to serve as a de facto embassy between the two Cold War enemies. North Korea stopped answering calls at the facility last week, accusing Moon of failing to uphold the agreements that established it, before announcing that Tuesday the building had been "tragically ruined with a terrific explosion."

Hours later, North Korean media published a statement from the General Staff of the Korean People's Army, saying the country would send troops in the areas around the factory park and to the Mount Kumgang tourist area. The two Koreas agreed to remove troops from those areas to make way for the joint projects that had once been seen as symbols of unity.

The benchmark Kospi Index fell as much as 1.5%, after South Korea's response. South Korea infrastructure stocks, which are seen as benefiting from inter-Korean businesses, also fell as tensions escalated between the two Koreas.

Unification Minister Kim Yeon-chul, South Korea's point man for relations with North Korea, offered to resign Wednesday for "being unable to meet the expectations of the people," his ministry said in a text message. Moon has yet to respond to his resignation offer.

Kim appears to have sacrificed the projects to demonstrate his frustration with the South Korean leader's continued support for a U.S.-led sanctions campaign that has battered the country's economy and deprived it of foreign currency. North Korea is raising the pressure on Moon after an unprecedented series of short-range ballistic missile launches failed to draw President Donald Trump back to the negotiating table.

Last week, North Korea similarly accused the U.S. of breaking promises during the historic meeting between Kim and Trump two years ago. The regime said the Trump administration had turned dreams of peace into a "dark nightmare" and it saw no benefit in engaging with Washington.

"For a while, I think we are going to see tensions," said Rachel Minyoung Lee, a former analyst for the U.S. government specializing in North Korea, told Bloomberg Television. "Pretty much everything is on the table."

While North Korea signaled further provocations, including "all kinds of regular military exercises" near the border, the regime was likely to calibrate any moves carefully. Kim would probably seek to avoid any actions that would pit his Soviet-era weaponry against the combined might of South Korea and the U.S., which has about 28,000 military personnel on the peninsula.

The initial U.S. response was muted, with a senior administration official saying the American government was aware of the North Korean move and that the U.S. was in close coordination with its South Korean allies.

Kim Jong Un has shown increasing frustration with Moon, a long-time proponent of peace who has struggled to balance North Korea's demands with more hawkish views in the Trump administration. Trump has refused to relax sanctions after three face-to-face meetings with Kim failed to produced what they U.S. side viewed as an acceptable plan to scale back North Korea's nuclear program.

North Korea has blamed the immediate crisis on defector-led activist groups in South Korea sending anti-Pyongyang leaflets by balloon across the border. While millions of such leaflets have been sent into North Korea over the years, the more recent campaigns came after a flurry of speculation about Kim's health and grip on power due to a series of extended absences from public view.

In recent weeks, Moon has renewed his pledges to restore economic cooperation and sought to lower tensions by seeking to cancel the licenses of the two groups over the leaflets. So far, the South Korean president has shown almost no appetite for retaliating against the Kim regime and derailing his peace pledge.

Kim Yo Jong "flatly rejected" a request from Moon's government to send National Security Adviser Chung Eui-yong and spy agency chief Suh Hoon as special envoys. The younger Kim, who in recent weeks has become the main of North Korea's pressure campaign against Seoul, called the proposal "tactless and sinister" according to KCNA said Wednesday.

Another North Korean official was quoted describing Moon as the "chief culprit" and a "provocateur" who allowed ties to fall apart, although didn't call him out by name. Yoon, Moon's spokesman, called Kim Yo Jong's comments "rude" and urged North Korea to be more respectful in its tone.

"It's only just the beginning," he said. "I am pretty sure there will be a serious escalation in the weeks to come."