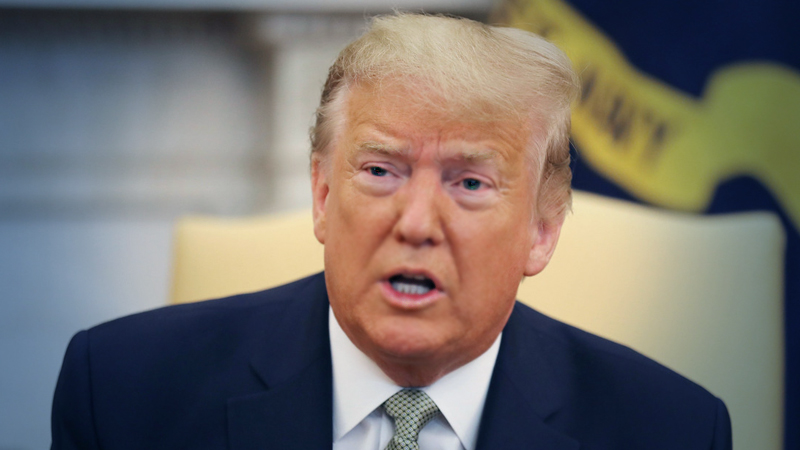 WASHINGTON - Addressing throngs of adoring fans last June, President Donald Trump posited as undisputed fact that Article II of the Constitution gave him "the right to do whatever I want as president."

What a difference a year makes.

In less than 24 hours this week, Trump twice had the whistle blown on his moves to bust through the boundaries of law - twin defeats that forced him onto the political defensive just as he is trying to generate momentum for his floundering reelection campaign.

The first whistle came in the form of John Bolton's explosive memoir of his 17 months as Trump's national security adviser, details of which were first reported Wednesday afternoon.

In his book, "The Room Where It Happened," Bolton says Trump solicited help with his 2020 reelection from Chinese President Xi Jinping, something that would be against the law. This is one of many damning anecdotes the adviser-turned- antagonist unspools to paint a portrait of Trump as a threat to the country and unfit for the presidency.

The second whistle came from the Supreme Court, which, in a stunning ruling on Thursday morning, blocked a signature Trump administration policy of ending the Obama-era Deferred Action for Childhood Arrivals program, which provides legal protections for undocumented immigrants known as "dreamers," who were brought to the country as children.

Even though Trump proudly shifted the court's ideological orientation to the right with his nominations of two conservative justices, it provided no accommodation for the president. Chief Justice John Roberts Jr., who joined the court's four liberals, wrote in the majority opinion that the administration's attempts to terminate DACA violated federal law and were "arbitrary and capricious."

Taken together, Bolton's revelations and the Supreme Court's rejection of a Trump policy that had been a central campaign promise amount to a stinging rebuke of Trump's use of executive power.

"It's part of a pattern of lawless activity," Rep. Adam Schiff, D-Calif., the chairman of the House Intelligence Committee, said in an interview Thursday. "The firings of inspectors general, the breaking of norms, rules, laws, constitutional oaths, American values - it's a persistent and pernicious theme of this administration."

An allegation of abuse of power was at the heart of House Democrats' case to impeach Trump. Although Senate Republicans acquitted the president at trial, supporters of his impeachment said Thursday that he is getting his just deserts now, less than five months before the election.

"It's a good week for the rule of law and a bad week for people who think they're above the rule of law," said Joyce Vance, who was a U.S. attorney in the Obama administration. "Trump is finally being held accountable. . . . The problem is we have a president who has demonstrated that he fundamentally doesn't believe in democracy, doesn't believe in our constitutional system of government."

Trump used his familiar arsenal to mount his defense. In late-night and early-morning tweets, he excoriated Bolton as a "wacko," a "dope," a "disgruntled boring fool" and a "sick puppy."

As for the Supreme Court, Trump said the "horrible & politically charged decisions" of this week - presumably including Monday's landmark ruling protecting gay and transgender people from workplace discrimination - were "shotgun blasts into the face of people that are proud to call themselves Republicans or Conservatives."

In a separate tweet, Trump asked, "Do you get the impression that the Supreme Court doesn't like me?"

The answer, according to former Nixon White House counsel John Dean III, is no.

"Justices watch what's going on in the world. They know we have an unstable leader. They see he's not a force for stability in democracy," said Dean, who famously testified against President Richard Nixon in Congress's Watergate inquiry.

Assessing the fallout from the court's DACA ruling and Bolton's memoir, Dean argued, "This is a blow against Trump that has existential implications for his presidency, but it's of the time. . . . Trump is becoming what he hates most, which is being a loser."

Trump's polling deficit against former vice president Joe Biden, the presumptive Democratic presidential nominee, has grown in recent weeks in national and battleground-state polls. Trump and his campaign team hope to begin reversing that trend on Saturday in Tulsa, where the president will return to the campaign trail to resume his mega-rallies, which were paused because of the coronavirus pandemic.

In December, the House voted to impeach Trump for pressuring the Ukrainian president to open an investigation into the Biden family, a move that would have benefited Trump's 2020 campaign. The Senate narrowly voted to acquit the president; only one Republican, Mitt Romney of Utah, joined the Democrats in voting to convict.

Bolton refused a subpoena to testify in the impeachment proceedings and saved his account for his book.

Bolton writes that Trump's alleged abuse of power to help his reelection extended beyond his dealings with Ukraine. On the sidelines of the June 2019 Group of 20 summit in Japan, Bolton writes, Trump turned a conversation with Xi to the coming U.S. presidential election and pleaded with the Chinese president to help ensure he would win.

"He stressed the importance of farmers, and increased Chinese purchases of soybeans and wheat in the electoral outcome," Bolton writes. "I would print Trump's exact words but the government's prepublication review process has decided otherwise."

Trump, as he has with other accounts by former staffers, characterized Bolton's book as a work of fiction by a disgruntled former employee. But the president has not disputed any of the specific scenes detailed by Bolton.

"Bolton's book, which is getting terrible reviews, is a compilation of lies and made up stories, all intended to make me look bad," Trump tweeted Thursday morning. "Many of the ridiculous statements he attributes to me were never made, pure fiction. Just trying to get even for firing him like the sick puppy he is!"

The historian Douglas Brinkley said this week's developments stand out in an already extraordinary presidency.

"I think Donald Trump has finally gotten his comeuppance," Brinkley said. "Right now, he is a grounded vessel, trapped by covid-19, by the social justice movement, by the Supreme Court saying he circumvented the law, and by Bolton saying that he's an idiot - and maybe a treasonous one."

"It's a plague of locusts around Trump," Brinkley added. "They're piling up and starting to break his spine."