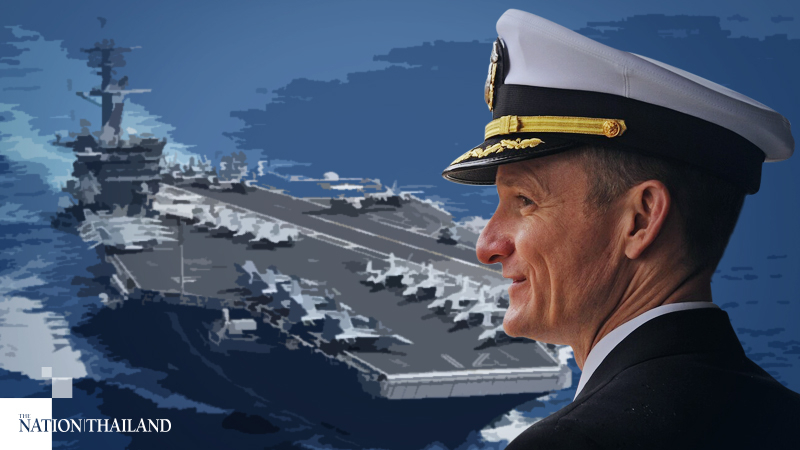 WASHINGTON - The U.S. Navy has upheld the removal of an aircraft carrier captain whose warnings about a coronavirus outbreak aboard the vessel raised concerns about the military's vulnerability to the pandemic and deepened a leadership crisis for the Navy.

A two-month internal investigation concluded that the dismissal of Capt. Brett Crozier, who was removed from command in early April after a letter in which he warned of the risk the virus posed to his crew aboard the USS Theodore Roosevelt was made public, should not be reversed, Adm. Michael Gilday, the chief of naval operations, told reporters Friday at the Pentagon.

Gilday said the investigation had found Crozier made poor decisions as the number of crew members infected with the virus accelerated, saying the captain would not be eligible for future command but would face no further disciplinary action. Reuters first reported the result of the investigation.

While Gilday said he initially recommended that Crozier be reinstated, a deeper investigation by the Navy found that both Crozier and Rear Adm. Stuart Baker, the commander of the carrier strike group that includes the Roosevelt, fell "well short of what we expect of those in command."

The Navy's probe also found Baker accountable for poor decision-making, which Gilday said would result in his promotion to two-star officer being put on hold.

In a report released Friday, Gilday also faulted the Navy's 7th Fleet, commanded by Vice Adm. William Merz, for "poor communication" that was "a significant contributing factor to the overall poor communication throughout this chain of events." But he recommended no action against Merz or Adm. John Aquilino, who oversees the U.S. Pacific Fleet.

The decision is likely to be unpopular with sailors who had supported Crozier and saw him as willing to risk his career to get his crew more help.

"I'm appalled," said Brett Odom, a former Navy officer and friend of Crozier's. "I think it's very clear that once you've got more than two stars, your untouchable in the Navy. To me, it's just unbelievable that the Navy would go from reinstatement to this. They're trying to have it both ways."

The outbreak aboard the aircraft carrier, and the Navy's handling of it, will receive more scrutiny in coming weeks. Rep. Adam Smith, D-Wash., the chairman of the House Armed Services Committee, announced Friday that his staff will be investigating the matter separately.

As the coronavirus crisis took hold across the United States this spring, the outbreak aboard the Roosevelt emerged as a symbol of the difficulties the Pentagon would face in containing outbreaks amid personnel who often live and work in cramped conditions.

While three service members have died as a result of the crisis - a low number that military leaders attribute to troops' youth and fitness - the virus has had a major impact on Pentagon operations, halting global movements, delaying training and deployments and, in the case of the Roosevelt, infecting about a quarter of the crew and putting one of a handful of deployed aircraft carriers out of commission for weeks. The military is now lifting some coronavirus restrictions.

The Roosevelt episode also compounded upheaval at the Navy's most senior levels. After the appearance of Crozier's letter, in which he asked for greater assistance and said "sailors do not need to die," acting Navy secretary Thomas Modly decided to relieve Crozier of command without waiting for an internal investigation.

Modly faulted the captain for not informing him directly of his fear that the service was not taking aggressive enough action to quash the outbreak.

Modly himself was then criticized for making disparaging comments about Crozier, whose response generated goodwill among his subordinates, to the Roosevelt crew during an impromptu visit to the carrier after Crozier's dismissal. Modly submitted his resignation to Defense Secretary Mark Esper shortly afterward.

Jonathan Hoffman, a spokesman for Esper, said the Pentagon chief had been briefed on the Navy's investigation and supported its conclusions.

"We are proud of the crew of the USS Theodore Roosevelt and am glad that they are back at sea in the western Pacific," Hoffman said.

The turmoil surrounding the Roosevelt came at a moment when Pentagon officials were scrambling to mitigate the pandemic's impact on military personnel and missions, and to manage intermittent friction with the White House. Modly served in the Navy's top civilian role for less than five months, after his predecessor was asked to resign over a different crisis related to President Donald Trump's intervention in the trial of a Navy SEAL.

On Friday, Navy officials said they had received no communication on Crozier's fate from the White House.

In Gilday's assessment, neither Crozier nor Baker moved quickly enough to fulfill their obligation to keep their crew and vessel safe, the admiral said. He said both men were slow to respond as the virus first emerged on board, and Crozier had demonstrated "questionable judgment" when he released some sailors from quarantine on the ship, putting others at higher risk.

"When obstacles arose, both failed to tackle the problem head-on and to take charge," Gilday said.

After Crozier's letter and dismissal, most of the Roosevelt's crew of about 4,900 people was eventually moved off the ship into isolation on Guam, where the ship had stopped when the outbreak erupted. A small number of sailors were hospitalized for coronavirus infections, and one died.

Gilday defended Navy leaders' decision to proceed with the Roosevelt's port call in Danang, Vietnam, in early March despite the coronavirus threat, just ahead of infections first surfacing on the ship. He said the decision by Adm. Phil Davidson, who commands Indo-Pacific Command, was "sound" and based on the risk assessment at the time.

Gilday also said the Navy has ruled out resupply flights from the Philippines as responsible for bringing the virus to the ship, a possibility some Navy officials had floated.