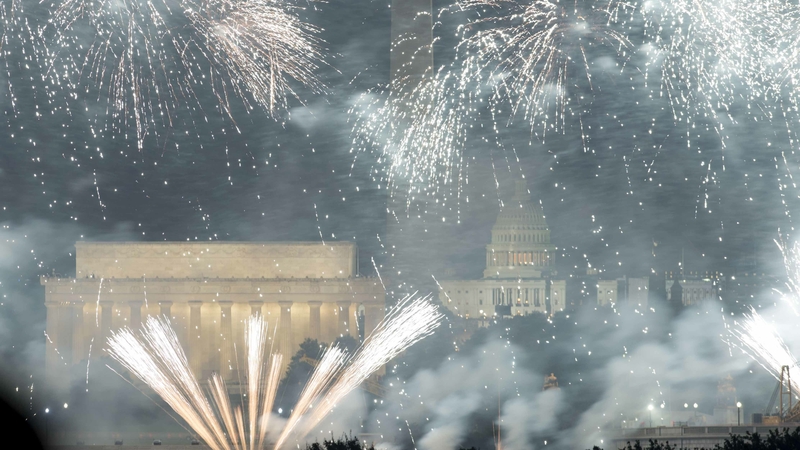 Fourth of July fireworks are seen over the National Mall from across the Potomac River in Arlington, Va., on July 4, 2019. MUST CREDIT: Washington Post photo by Marlena Sloss

WASHINGTON - President Donald Trump plans to host an Independence Day celebration again this year, despite the coronavirus pandemic, with military demonstrations, fireworks, and a speech to "salute our amazing heritage," the White House announced Friday.

The president has drawn fire recently for planning large gatherings, such as a rally expected to take place in Tulsa on Saturday, in the midst of the coronavirus shutdown and social distancing restrictions.

This year's event will be a somewhat scaled-down version of Trump's first "Salute to America," last year, in which the president gave a speech in front of the Lincoln Memorial, flanked by armored vehicles and with military jets passing overhead.

Presidents typically have not participated in July Fourth celebrations on the Mall. In 1987, President Ronald Reagan took part in what was billed as a "Star Spangled Salute to America" at the Jefferson Memorial on July 3.

In prior years, Trump had tried to host patriotic events such as a military parade. His event last year was welcomed by some but derided by others, who said Trump was turning a beloved nonpartisan tradition of celebrating independence into something akin to a political rally. Two people were arrested for burning a flag in front of the White House.

The District of Columbia government cannot dictate what the federal government does on federal land, and the office of District Mayor Muriel Bowser did not immediately respond to questions on Friday about the White House's plan.

As for celebrations on local streets, Bowser, a Democrat, said in May that she would not issue any permits for local Fourth of July parades, such as the popular annual neighborhood parade in the Palisades, while the city remains under coronavirus guidance that prohibits large gatherings.

Since then, Bowser herself has attended some of the protests over George Floyd's death in Minneapolis, which were far larger than the current cap on 10 people per gathering or the new cap, starting Monday, of 50 people.

She has continued to urge Washingtonians to practice social distancing to contain the spread of the virus.

For decades, the National Park Service has set off fireworks on the National Mall on July Fourth, and musicians and the National Symphony Orchestra have performed free concerts on the West Lawn of the U.S. Capitol.

This year's event will include music, military demonstrations, and flyovers "to honor our nation's service members and veterans," according to the White House news release.

After Trump's speech about independence, fireworks will be ignited over the National Mall.