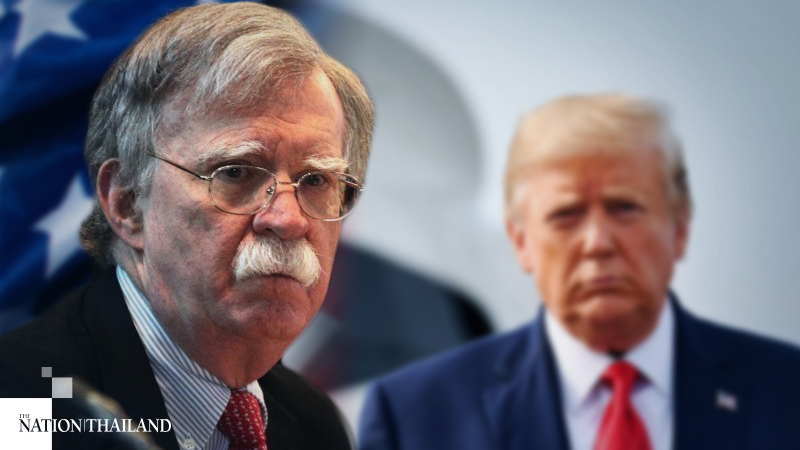 WASHINGTON - President Donald Trump was in a White House event with governors Thursday when he took a moment to punch out a tweet from his cellphone - threatening to decouple the U.S. economy from China, the world's second largest economy.

The missive was another salvo in a long bilateral trade dispute but it also represented an effort by the president to reestablish himself as a hard-liner on China - a day after shocking revelations from his former national security adviser John Bolton painted him as obsequious to Chinese President Xi Jinping in private conversations.

Trump's urgency underscores how Bolton's disclosures in a new book about his White House tenure could complicate a key pillar of the president's reelection strategy as his campaign has attacked former vice president Biden, the presumptive Democratic nominee, as soft on China.

As his public approval ratings have tumbled amid the coronavirus pandemic, Trump has sought to deflect blame by railing against Beijing for allowing the "Chinese plague" to proliferate beyond its borders. The president has taken steps to demonstrate his disapproval, including cutting off U.S. funding to the World Health Organization for purportedly caving to China's propaganda.

Yet as he did during the trade war, Trump has maintained an oddly cordial relationship with Xi, refraining from directly criticizing him. It is on this account that Bolton's book could prove most damaging, portraying the president as even more unctuous in private - so eager to curry favor with the Communist Party leader to help his own reelection chances that he was willing to overlook, or even endorse, China's atrocious human rights abuses.

Bolton's most consequential account of Trump's interactions with Xi came during a one-on-one meeting in Japan in June 2019 when the Chinese leader complained about the growing chorus of China critics in the United States.

Trump assumed Xi meant the Democrats, Bolton recounts in the book, and agreed that his political rivals had demonstrated "great hostility" toward Beijing.

Trump then made clear to Xi that increased agricultural purchases by Beijing from American farmers would help him in the 2020 election, Bolton writes. In the same meeting, Trump appeared to offer tacit approval of the Communist Party's jailing of an estimated 1 million Uighur Muslims in Western China in detention camps, according to Bolton, who cites an account from the U.S. government interpreter.

"Trump said that Xi should go ahead with building the camps, which Trump thought was exactly the right thing to do," Bolton writes.

Biden's campaign swiftly seized on the revelations Wednesday. In a statement, the former vice president accused Trump of being "willing to trade away our most cherished Democratic values for the empty promise of a flimsy trade deal that bailed him out of his disastrous tariff war that did so much damage to our farmers, manufacturers, and consumers.

"If these accounts are true," Biden continued, "it's not only morally repugnant, it's a violation of Donald Trump's sacred duty . . . to protect America's interests and defend our values."

In a sign of just how deeply Bolton's portrayal of Trump could cut into his tough-guy bravado, the actress Julia Louis-Dreyfus, who starred in the satricial television series Veep, tweeted a clip from her show in which, as U.S. president, she seeks to cut a deal with her fictional Chinese counterpart to help her reelection.

"Seriously, didn't WE write this?" she wrote.

Trump and his aides denounced Bolton's account as lies, with Secretary of State Mike Pompeo labeling him a "traitor." Yet Bolton wrote that another senior administration official - Matthew Pottinger, now the deputy national security adviser - told him Trump had made similar remarks to Xi a year earlier, a detail that could make it more difficult for the president to delegitimize the anecdotes. Pottinger, through a National Security Council spokesman, declined to comment.

For Trump, the political damage could compound because Bolton's portrait of a president willing to ask a favor of a foreign leader for his own political benefit echoes the impeachment scandal in which Trump, during a private phone call last summer, asked the president of Ukraine to investigate Biden and his son Hunter.

In ads, Trump's campaign has continued to impugn Biden over Hunter's past financial relationships with private companies in Ukraine and China. And it has portrayed Biden - who as vice president vigorously courted Xi in 2011-2012 when he was China's vice premier - as unwilling to stand up to the Chinese leader.

Trump has repeatedly asserted, without evidence, that China wants Biden to win.

But Biden's campaign has fought back, hitting Trump for his repeated public assurances that Xi had the coronavirus under control during January and February, before pivoting to blame mid-March as U.S. infections began to skyrocket.

Biden also has lambasted Trump for failing to hold China to account over human rights abuses in the Uighur camps in Xinjiang and for its crackdown on pro-democracy protests in Hong Kong.

"The revelations were shocking to read but they basically confirm everything we already knew about Trump's approach to China - his total disregard for human rights and the political motivation for the trade deal," said Ely Ratner, executive vice president at the Center for a New American Security who served as Biden's deputy national security adviser from 2015-2017.

"Anybody paying attention can see the contrast also between the cabinet officials who are outspoken on some issues and the president's complete silence," Ratner said.

In Bolton's account, Trump viewed "getting tough" on China almost exclusively as a strategy to bolster trade, which would help his political fortunes, than a broader strategic contest of political systems between a Democratic society and an authoritarian regime.

"He stressed the importance of farmers, and increased Chinese purchases of soybeans and wheat in the electoral outcome," Bolton wrote.

Trump's tweet on Thursday in which he wrote that "the U.S. certainly does maintain a policy option, under various conditions, of a complete decoupling from China" came a day after Robert E. Lighthizer, the U.S. trade representative, said such a scenario was not reasonable.

Since the economic damage from the coronavirus pandemic has deepened, Trump has been desperate for China to abide by a "phase one" trade deal, inked in January, under which it has agreed to purchase billions of dollars in U.S. agricultural goods. The president has touted the deal as making good on his pledge to help farmers, a key constituency.

On Wednesday, Pompeo met with China's foreign policy chief, Yang Jiechi, in Hawaii for seven hours to address concerns that Beijing's commitment to the first phase has been slipping.

Following the meeting, Pompeo hailed that Yang "recommitted to completing and honoring all of the obligations of Phase 1 of the trade deal," but another U.S. official involved in the talks, David Stilwell, said Beijing had not been "forthcoming" and that its "words will be judged by deeds."

Trump has seized on comments Biden made last year that China is "not competition for us" and has called him "a dummy" who underestimates the threat posed by its predatory economic practices.

Conservatives said Bolton's revelations could hurt Trump, but Gordon Chang, a China hawk who appears frequently on Fox News, said the president still has time to do damage control ahead of the election in November.

"Both Trump and Biden are vulnerable on China, in different ways, but only one of the two has the ability to change his record during the campaign - that's Trump," Chang said. "Biden is stuck with things he said that sound off-key in today's environment. Trump has also said such things, but a president, through action, can change the public's perceptions."