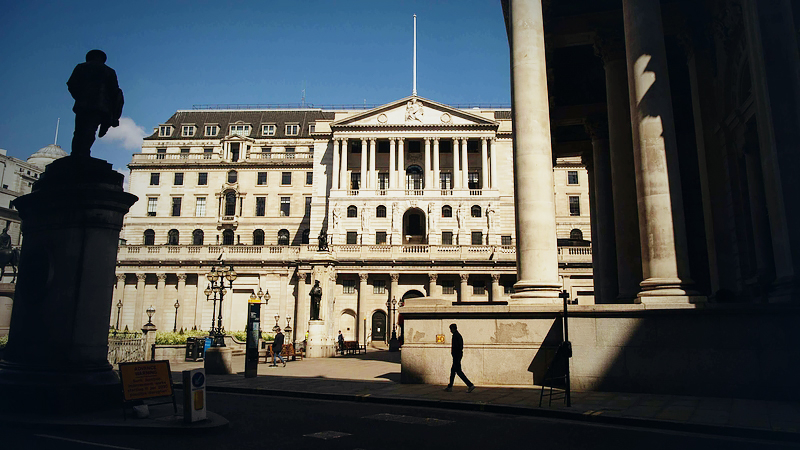 The Bank of England stands in London, U.K., on May 6, 2020. MUST CREDIT: Bloomberg photo by Simon Dawson.

The Bank of England's surprisingly restrained tone on the economy hasn't gone down well with investors.

The market's gloomy response to the BOE's Thursday decision to slow the rate of stimulus suggests U.K. assets will be more vulnerable to shifts in sentiment in the coming weeks, as investors grapple with uncertainties from Brexit to the growth shock from the coronavirus pandemic. Gilts in particular may face increased pressure when the Debt Management Office unveils its debt-sales plan for the next quarter on June 29.

Britain's debt load is now larger than the size of the economy, the first time that's happened since 1963.

"If the BOE is now buying half as much, who will step in to fill the gap?" said Jordan Rochester, a group-of-10 currency strategist at Nomura International. "This is a negative for U.K. assets."

Both the pound and U.K. government bonds sold off after the central bank said Thursday it would slow the pace of its asset purchases, despite a 100-billion-pound ($124 billion) boost to the size of the program. With the BOE aiming to complete the program later this year, its weekly bond buying will likely be about half its current 13.5 billion-pound binge, making it the only major central bank to scale back the speed of quantitative easing.

U.K. debt issuance in the 2020-21 fiscal year is already set to dwarf the financial-crisis era record as the U.K. stares at one of the deepest recessions among advanced economies. The OECD predicts a contraction exceeding 11% this year as the government struggles to map out a smooth exit from a lockdown imposed later than much of Europe.

The BOE was among the first major central banks to act in response to the crisis, cutting rates twice in March before the government shuttered most of the economy. It restarted its bond-buying program and said repeatedly -- including on Thursday -- that it stands ready to do more if necessary.

"If we get another episode of market stress like we saw in March, then they'll pick up the pace again" with their bond buying program, said James Smith, an economist at ING in London. "So they are providing the necessary backdrop to keep markets in a calm state."

Most market watchers, however, appear to focus on the risks the BOE chose not to mention -- from the prospect of a no-deal Brexit to a second wave of the virus. Kallum Pickering, a senior economist at Berenberg, said the economic outlook doesn't justify slowing down bond purchases.

Market reaction to the BOE was in stark contrast to what the European Central Bank saw earlier this month, when it announced a bigger-than-expected boost to its quantitative-easing program. That had helped propel Italian bonds higher, narrowing risk premiums across the region.

For Citigroup, the U.K. yield curve is set to steepen more than its U.S. equivalent, underscoring how the BOE's policy is less accommodative than the Federal Reserve's offer of "unlimited" support. The yield premium on 30-year gilts over their five-year peers jumped Thursday by the most in three months.

Speculation is growing that both nations will have to adopt yield-curve control as they remain reluctant to follow the negative interest-rate path taken by the Bank of Japan and the ECB.

BOE's Chief Economist Andy Haldane voted to keep asset purchases unchanged, the only one in the monetary policy committee's nine members to do so -- a sign that more easing isn't a foregone conclusion. Bailey for his part said that policy makers didn't discuss negative rates and isn't targeting the yield curve.

"If you implement yield-curve control while the curve is selling off, it will require a larger degree of buying to rectify it," said Peter Chatwell, head of multi-asset strategy at Mizuho International. "The problem with this level of disappointment is that, if the gilt curve stays this much higher and steeper, it will feed through negatively in pound risk assets."

A Treasury poll this week showed economists private-sector economists on average expect a 9.1% contraction this year, followed by growth of 6.2% in 2021. That would leave gross domestic product 3.5% below 2019 levels by the end of next year.

They're far less optimistic about a potential rebound in growth than the scenarios produced by both the BOE and the government's fiscal watchdog. The latter two saw lost growth reclaimed by 2021 and didn't include the impact of a potential second wave of virus infections.

Borrowing costs in the U.K. are still close to record lows, with the 10-year yield hovering around 0.2%. Still, government bonds across tenors fell, and the pound is set for its second week of losses.

Brexit trade talks meanwhile are still struggling to make significant progress. The U.K. is planning a "shock and awe" information campaign to prepare companies for Brexit, with the possibility of a cliff-edge exit a real possibility.

"Markets are beginning to focus on the end-June Brexit deadline," Bank of America Merrill Lynch strategist Michael Hartnett, who sees increased risks that the BOE would be forced to take interest rates into negative territory after cutting to 0% in November, wrote in a note to clients. The bank sees the pound weakening further.

"It's the uncertainty combined with a lack of policy ammunition that should be policy makers' main concern now."