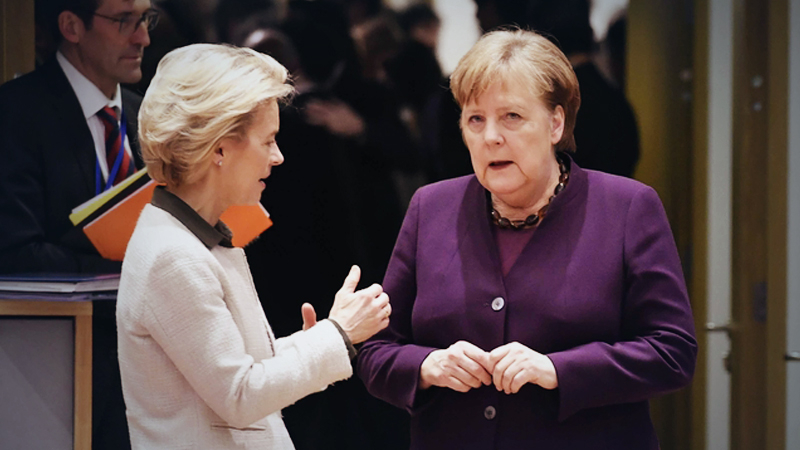 German Chancellor Angela Merkel, with backup from France and the European Central Bank, warned the rest of the European Union's leadership that they will be jeopardizing the bloc's economic recovery and risking a market rout if they fail to complete negotiations over a massive stimulus package next month.

The EU's 27 leaders held their first debate on a proposed 750 billion-euro ($840 billion) plan to help their economies heal from the covid-19 lockdowns during a video conference on Friday and agreed to meet in person next month with the aim of reaching an agreement.

The proposal also seeks to tackle divergences in the region's internal market that have widened as a result of the uneven impact of the outbreak and differing national responses. The program, which needs to win the backing of every capital, would be funded by joint debt issuance in a significant step toward closer economic integration.

Yet even as leaders all concurred that an agreement must be struck as soon as possible, several leaders dug in their heels as the key fault lines emerged clearly: the size of the funds, the strings attached to them, how they will be repaid and, crucially, how they will be distributed to different nations.

"The bridges we still have to build are large, that's without question," German Chancellor Angela Merkel told reporters after the virtual summit. "Germany is for a swift agreement. It's no exaggeration to say we're before the biggest economic challenge in the history of the European Union," she said.

The meeting amounted to little more than each country airing its opening position, and the real work of forging a compromise will begin now. But the German chancellor signaled she's ready to turn up the pressure on those who dig in their heels at the next round of talks, wondering aloud if some people are yet to grasp just how difficult the coming months will be for the EU, according to officials familiar with her comments.

Her remarks echoed concerns voiced by ECB President Christine Lagarde, who told the group that the recent calm in financial markets is in part because investors have priced in action from governments. If they fail to reach a timely agreement on funding the recovery, then sentiment could shift, according to officials familiar with her comments on a videoconference.

French President Emmanuel Macron, who met with Boris Johnson in London on Thursday, pointed out that the bloc will also have Brexit negotiations to contend with when leaders return from their summer breaks.

The ECB is forecasting a quarter-on-quarter decline of 13% in the second quarter and a contraction of 8.7% in 2020. Lagarde said the worst impact on labor markets is still to come and unemployment could end up as high as 10%, a person familiar with her remarks at the summit said.

Yet despite the pressure from Paris, Berlin and Frankfurt, disagreements loomed large.

Four fiscally hawkish nations including the Netherlands and Austria have been chafing at the idea that their taxpayers could wind up on the hook for spending in countries that were struggling financially long before the virus hit. To them, the aid needs to come faster, be more targeted, focus on loans and to be distributed under tighter criteria.

Dutch Prime Minister Mark Rutte brushed off talk of a market selloff, in a sign that he won't allow his country to be railroaded into a deal.

"Nothing terrible will go wrong if there is no deal by mid July," he told reporters afterward. "A great rush is not necessary."

All the same, his tone during the videoconference was relatively moderate, one official said.

Austria, Luxembourg and Sweden argued that the European Commission's plan to use economic data from before the pandemic to allocate aid would be unfair and called for an approach that takes into account the damage caused by the outbreak, officials familiar with the discussion said.

The recovery debate is complicated by the fact that the proposed recovery fund will have to be agreed alongside the EU's next long-term budget, which is set to kick in next year. But that also creates more scope for compromise.

During Friday's discussions, leaders seemed to signal there is room for bargaining.

The four budget hardliners are all net payers to the EU budget and Denmark, the Netherlands and Sweden received rebates totaling more than 1 billion euros on their contributions under the EU's previous spending plan.

Those rebates wouldn't necessarily carry over into the next budget and the Danish have said explicitly that they care more about maintaining their rebate than winning changes to the structure of the recovery program.

While countries like Spain shot down the payments, suggesting they are not appropriate at this time, others were more pragmatic.

Macron said he was not a fan of the correction payments, one official said, but he could live with them if that was necessary to get a deal done.