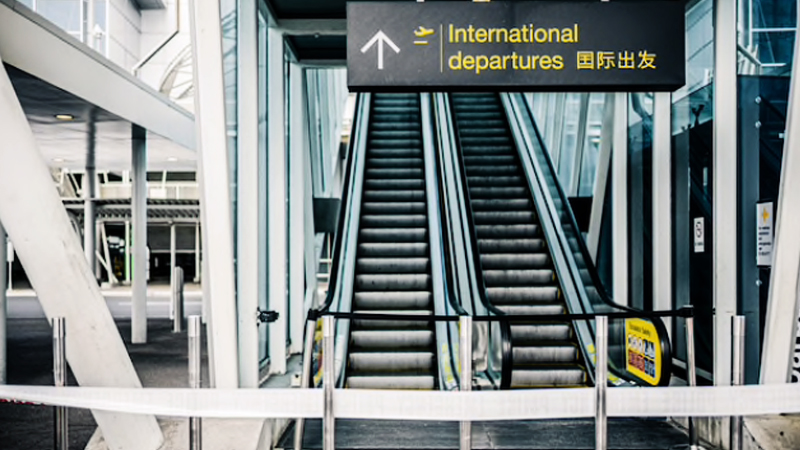 Auckland International Airport during the Level 4 lockdown. MUST CREDIT: photo for The Washington Post by Cameron McLaren.

Essential workers like him were lauded as heroes as New Zealand's international prestige soared. (New Zealand has since seen three new cases).

But the win against the virus came at a cost, and Joaquin is among those paying it.

His wife and two toddlers are stuck in Philippines, where the family is from. They are among an estimated 10,000 foreign workers and family members of citizens and permanent residents who blocked from returning to New Zealand when country closed its border. It's now extremely difficult for anyone but a New Zealand citizen - and a few select foreigners - to get into the country despite the government's pledges to assist families locked out.

"[Jeus] has lost lots of milestones with his son," said 35-year-old Kristine Joaquin, who is a nurse like her husband, by phone from Manila. She has a visa, but said New Zealand immigration services have nine times denied her applications for a travel exemption.

The border isn't impassable for all. The government has provided special exemptions to the crew working on the sequel to the sci-fi film "Avatar," along with their families, classified as "high-value workers" for "projects of national or regional significance" in the tourism-reliant county. The American and British America's Cup sailing teams have also been allowed in, as have their families, and in one case, a nanny - some 300 people in total.

"I feel like New Zealand now has an iron curtain," said Wendy Harnett, 54, a New Zealand citizen whose husband is from Japan and has been trying to enter the country since March when offshore visa processing was suspended.

"We did the lockdown. And, yes, we eliminated the virus. But no one thought about what next," Harnett told The Washington Post by phone. "Well, you eliminate the virus and then you have a whole other set of problems."

New Zealand's Immigration Ministry estimated there were around 10,000 foreign workers - ranging from employees on farms to employers in big businesses - on temporary visas and locked out. In the meantime, the country of 5 million people noted Thursday its largest quarterly economic contraction in 29 years as it entered its first recession in nearly a decade. (The Ministry of Immigration did not immediately respond to a request for comment from The Post.)

Immigration restrictions and a struggling economy are not unique to New Zealand amid the pandemic. But the plight of those stranded highlight an often hidden cost of the nation's efforts to banish the virus. These experiences, said New Zealand immigration lawyer Alastair McClymont, show the flip side of policies that squashed the country's outbreak and earned it the attention of the world.

Among those impacted are several thousand migrant workers from India who were back home on holiday when New Zealand suddenly shut, according to McClymont. Many of his clients are now without income as expenses accumulate.

For anyone who does cross the border, New Zealand has mandated a 14-day quarantine at isolation centers with a daily capacity of 250 people. Initially, as the lockdown eased, immigration services said that partners of New Zealand citizens or permanent residents with certain visas could enter - but only if they were traveling with a New Zealand citizen. The government amended the rule the second week of June, allowing partners with relationship-based visas to enter on their own.

This change, however, didn't help most of the people polled in a Facebook group of more than 700 members set up by separated families, according to Harnett. That's because after months of offshore visa services being shut, most partners still remain unable to acquire a visa. New Zealand is processing some visas again, but immigration authorities are first going through the large backlog of applications from inside the country, while those from abroad largely remain deferred.

As of June 16, there have been over 16,500 requests for exemptions for foreigners to enter New Zealand and 2,600 approvals, the majority for humanitarian reasons, according to immigration services cited by local media. (Overall, 64,000 people have entered New Zealand since the borders closed, the vast majority Kiwi citizens or permanent residents.)

New Zealand has had around 1,500 confirmed coronavirus cases and 22 confirmed deaths related to covid-19. Experts say that's largely due to Prime Minister Jacinda Ardern's decisive and early action to eliminate, rather than simply contain, the virus. The country's had its blips: Earlier this week, two women recently arrived from the United Kingdom were allowed to leave quarantine and turned out to be infected with the virus, setting off a new round of infection worries.

Families interviewed said they understood the need for the border restrictions, but felt they had been unfairly applied.

Immigration Minister Iain Lees-Galloway told New Zealand's Public Broadcaster RNZ earlier this month that the government was working to assist divided families and to set travel criteria for residents on temporary work visas locked out. But, he cautioned, given New Zealand's post-coronavirus economic tribulations, jobs and future visas may not be guaranteed.

"The immigration system, particularly the temporary visas, are there to fill gaps in the New Zealand labor market, and the unfortunate truth is that there will be fewer gaps," Lees-Galloway said. "Some of our migrant workforce are going to have to seriously weigh up what the future holds and think about their options."

In response to criticism, he told RNZ that Avatar's filming would create over 1,000 jobs. The film's director put that figure closer to 400 local jobs, in addition to predicting the crew would spend $70 million while filming, Reuters reported.

For photographer and New Zealand citizen Ruth McDowall, who freelanced in West Africa for a decade, including for The Post, the last few of months of navigating immigration services have been a "heartbreaking experience." Currently in Auckland, she is raising a son on her own after authorities denied her long-term partner, who is Ghanaian, permission to enter the country on humanitarian grounds. His case "did not meet the high threshold required," immigration services determined, according to a statement to RNZ.

Now her partner follows their son as he grows up via a camera on a selfie-stick.

"It seems like they've graded everyone on economic importance, even New Zealanders' families," she said by phone. "It feels like we've been put in this box of low-value families."

Before the pandemic, she said her partner was "already disadvantaged trying to get a visa" as a Ghanaian citizen and had previously been denied one. These days, McDowell said, it feels like they are an even lower priority.

"If they were not letting anybody in then you just have to deal with it," she said. "But it's the fact that they are picking and choosing who they think are valuable people for this country, I think that's what makes it really painful."