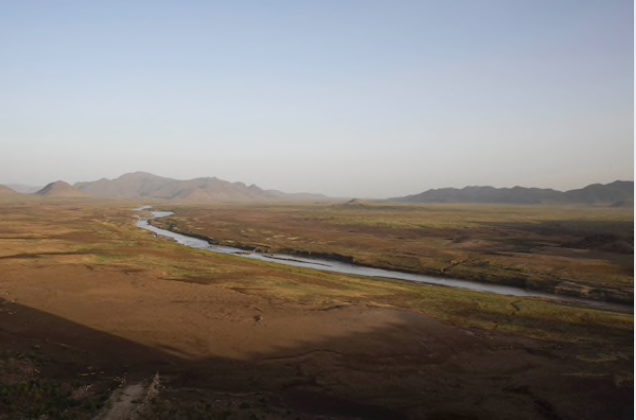 The Blue Nile river flows from the highland in the Benishangul-Gumuz Region of Ethiopia, on May 21, 2019. MUST CREDIT: Bloomberg photo by Zacharias Abubeker.

A last ditch attempt to resolve a decade-long dispute between Egypt and Ethiopia over a huge new hydropower dam on the Nile has failed, raising the stakes in what -- for all the public focus on technical issues -- is a tussle for control over the region's most important water source.

The talks appear to have faltered over a recurring issue: Ethiopia's refusal to accept a permanent, minimum volume of water that the Grand Ethiopian Renaissance Dam, or GERD, should release downstream in the event of severe drought.

What happens next remains uncertain. Both Ethiopia and Sudan -- a mutual neighbor that took part in the talks -- said that progress had been made and left the door open to further negotiation. Yet the stakes in a region acutely vulnerable to the impact of climate change are disconcertingly clear.

Ethiopia has threatened to start filling the dam's reservoir when the rainy season begins in July, with or without a deal, a step Egypt considers both unacceptable and illegal. In a statement late Wednesday, Egypt's irrigation ministry accused Ethiopia of refusing to accept any effective drought provision or legally binding commitments, or even to refer the talks to the three prime ministers in an effort to break the deadlock. Ethiopia was demanding "an absolute right" to build further dams behind the GERD, the ministry said.

Egypt's Foreign Minister Sameh Shoukry threatened on Monday to call for United Nations Security Council intervention to protect "international peace and security" if no agreement was reached. A day later his Ethiopian opposite, Gedu Andargachew, accused Egypt of "acting as if it is the sole owner of the Nile waters."

Egyptian billionaire Naguib Sawiris even warned of a water war. "We will never allow any country to starve us, if Ethiopia doesn't come to reason, we the Egyptian people will be the first to call for war," he said in a tweet earlier this week.

Although both sides have played down the prospect of military conflict, they have occasionally rattled sabers and concern at the potential for escalation helped draw the U.S. and World Bank into the negotiating process last year. When that attempt floundered in February, the European Union and South Africa, as chair of the African Union, joined in.

"This is all about control," said Asfaw Beyene, a professor of mechanical engineering at San Diego State University, California, whose work Egypt cited in support of a May 1 report to the UN. The so-called aide memoire argued that the GERD and its 74 billion cubic meter reservoir are so vastly oversized relative to the power they will produce that it "raises questions about the true purpose of the dam."

Egypt's concern is that once the dam's sluices can control the Nile's flow, Ethiopia could in times of drought say "I am not releasing water, I need it," or dictate how the water released is used, says Asfaw. Yet he backs Ethiopia's claims that once filled, the dam won't significantly affect downstream supplies. He also agrees with their argument that climate change could render unsustainable any water guarantees given to Egypt.

Both sides describe the future of the hydropower dam that will generate as much as 15.7 gigawatts of electricity per year as a matter of national survival. Egypt relies on the Nile for as much as 97% of an already strained water supply. Ethiopia says the dam is vital for development, because it would increase the nation's power generation by about 150% at a time when more than half the population has no access to electricity.

Though more than 4,000 miles long and a byword for plenty, the Nile is -- in water terms -- poor. The river discharges just 1.4% as much water on average as the Amazon, one sixth of the Mississippi and less than half as much as the Danube. Those water volumes are predicted to be further reduced by climate change.

Worse, the populations along the Nile are some of the fastest growing in the world. In 1954, when Egypt decided to build the High Aswan Dam, the combined population of Egypt, Ethiopia and Sudan (including today's South Sudan, which gained independence in 2011) was 51 million. That figure is now an estimated 272 million. In 2050, according to UN population projections, it will be 466 million.

Still, geopolitical fears have turned eminently resolvable issues -- such as setting a filling schedule for the dam that won't cause sudden shortages downstream -- into episodes of diplomatic trench warfare. Time and again, the two sides have fought each other to a standstill over seeming technicalities, according to William Davison, a senior analyst at the International Crisis Group, a Brussels-based think tank. Ethiopia's perception of a historical wrong that must be righted, combined with rampant mistrust and the sensitivity of the issue in both countries "have turned what is a tricky technical dispute into a zero-sum political game," said Davison, speaking by phone from the Ethiopian capital, Addis Ababa.

Take just one example. In 2015, the leaders of Egypt, Ethiopia and Sudan agreed to appoint a neutral consultant to assess the key question of what impact the dam would have downstream -- one of several studies Ethiopia failed to produce before beginning GERD's construction in 2011. It took a year to agree on a (French) consultant to do the work, but when he set out how he planned to do go about it, Ethiopia objected. The assessment never began.

The reason was that the consultant chose current water usage as the baseline against which to measure the dam's potential impact. That's routine practice, except that the current levels were set by Egypt and Sudan in a 1959 bilateral treaty that divided the Nile's water between themselves, evaporation and the Mediterranean Sea, leaving none for other riparian states.

In its own May aide memoire to the UN Security Council, Ethiopia accused Egypt of using negotiations over the dam as a kind of back door route to impose the terms of such "colonial-era treaties" to which it had never been party."How do you expect me to say zero for me, 100% for others?" Ethiopia's Minister of Water, Energy, Irrigation and Electricity Seleshi Bekele said in an interview in Addis Ababa last year, when asked about Egypt's concern that the dam might cut into its share of the Nile. "The mind-set, the way the question is raised irritates me, what about other poor people? Don't they need to develop?" Egyptian water ministry officials say their country's two thirds share of the Nile's water isn't as unfair as it sounds. The river's average annual flow of 84 billion cubic meters makes up just 5% of the volume of rain that falls in the Nile basin each year, a gift to nations and their farmers that is unevenly distributed.

Egyptian officials also see Ethiopia's reluctance to conduct studies and consult before building the GERD as part of a pattern, as it seeks to establish "hydro-hegemony" over the region. They cite Ethiopia's construction of another dam without prior cross-border consultation -- Gibe III, on the Omo River -- which the UN, in 2018, warned was causing water loss that threatened Lake Turkana in Kenya, a world heritage site.

Some of these concerns appear to have answers. Built just 20km (12 miles) from the border with Sudan, and with a reservoir that backs up through some 150 miles of mountain gorges, the Renaissance dam would be uneconomic for Ethiopia to use for irrigation, unlike Gibe III.

An independent panel appointed by the three countries estimated in 2013 that the GERD would lose about 3% of water passing through it, to evaporation and seepage. But it also said it would make up for at least some of that loss by regulating summer floods in Sudan and reducing evaporation in Lake Nasser, the desert reservoir behind Egypt's High Aswan Dam.

The four-to-seven year fill period tentatively agreed by the three parties is more than enough to protect Egypt's water supply in any but the most extraordinary of droughts, according to Asfaw, the California professor, noting that Egypt filled the Aswan dam's reservoir -- over twice as big as the GERD's -- in five years. Equally, he said, Egypt got aspects of his work wrong when it claimed Ethiopia's dam was too big, mistaking turbine capacity for reservoir size. There's plenty to negotiate in the filling and coordinated operation of the GERD, says Asfaw, "but there is no engineering case for any threat of war."