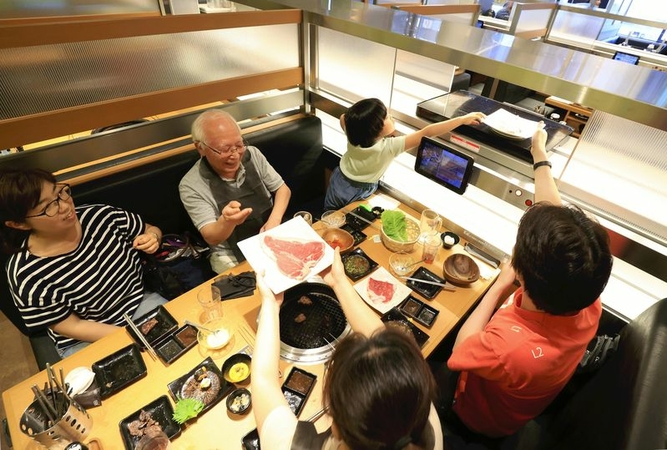 Customers pick up food delivered via a conveyor belt at a yakiniku restaurant opened by Watami in Ota Ward, Tokyo, on May 16.

The Japanese restaurant industry is facing unavoidable changes to its long-held business models that are expected to continue even after the novel coronavirus outbreak is contained.

Popular offerings such as banquets for large groups and family meals at restaurants were replaced with take-out and home-delivery services during the state of emergency period from April to May. Now many restaurant operators see little hope of returning to their tried-and-true practices.

The situation is particularly tough for Japanese-style izakaya pubs. In mid-May, major izakaya chain operator Watami Co. opened a yakiniku restaurant with an emphasis on infection-control measures. The first outlet of the Kamimura Bokujo yakiniku restaurant chain in Ota Ward, Tokyo, is an example of efforts to minimize the contact between the staff and customers.

Beef and other foodstuffs are delivered to customers’ tables on a conveyor belt-like lane instead of the staff carrying it. The air at floor level is completely recycled every four minutes and tables are separated with glass panels. Watami is focused on making families feel at ease through these extra steps.

In April and May, when the state of emergency was declared, Watami’s izakaya and other restaurants saw sales plunge more than 92% from the previous year, and the number of customers is still far from the level it was at before the coronavirus outbreak.

Watami Chairman Miki Watanabe said: “We believe that sales for our group will remain at 70% next year. The izakaya business will be difficult to operate in the future.”

Japanese companies are continuing to encourage employees to telecommute and refrain from banquets as precautions against another virus outbreak. Further, people’s eating habits have also changed. Izakaya operators are reevaluating their business model because they believe that the number of customers simply won’t go back to the pre-pandemic levels.

Three branches of the izakaya chain Tsukada Nojo in the Tokyo metropolitan area will be remodeled into set meal restaurants, named Tsukada Shokudo, and reopened after May.

Tsukada operator AP Company Co. developed this strategy in anticipation of a decrease in nighttime sales, while accommodating an increase in customers during the day for lunch.

Family restaurants, whose main customer base is families, are also making adjustments. Royal Holdings Co. has decided to close about 70 of its restaurants — 10% of its total outlets — by 2021, including Royal Host and Tempura Tendon Tenya.

Meanwhile, restaurant operators nationwide are strengthening their response to a new trend in eating style — meals cooked outside the home for eating at home — which falls somewhere between home cooking and eating out at restaurants.

When the virus outbreak accelerated, McDonald’s Japan suspended in-store eating at almost all of its restaurants, but the number of drive-thru customers increased its sales in May by 15.2%, and sales have remained strong in June.

Domino’s Pizza Japan, Inc. which specializes in home delivery, hired about 7,400 people, mainly part-timers, between April and May in order to respond to the increase in take-out and delivery orders, increasing its workforce 1.7-fold. The company also plans to open outlets in Hokkaido, increasing the number of its stores from the current 670 or so to 1,000 after 2025.

With the hike of the consumption tax rate to 10% last October, some restaurant operators, such as McDonald’s, have already stepped up their take-out services, because meals purchased for take-out are subject to a reduced tax rate of 8%. The trend toward take-out food further accelerated as more people refrained from going out amid the spread of the coronavirus pandemic.

However, many privately owned and small-scale restaurants are limited by their financial capacity to react to these new trends.

According to the Teikoku Databank, Ltd. the number of restaurant bankruptcies this year with debts of ¥10 million or more reached 308 as of the end of May, at a higher pace than in 2019, when there were record 732 cases for the full year.

“The number of actual bankruptcies would be much higher if private businesses with smaller debts were included,” an official at the research company said.

Japan’s restaurant industry enjoyed strong growth in the 1970s, when major nationwide chains emerged one after another. The market size has grown from ¥8.5 trillion in 1975 to a peak of ¥29 trillion in 1997, and declined to ¥25.7 trillion in 2018. Even so, it is about twice the size of the supermarket industry.

Seiichiro Samejima, chief analyst at Ichiyoshi Research Institute Inc., said, “The industry should build a business model based on the assumption that the number of customers will decline and not hesitate to give up, such as closing stores early.”