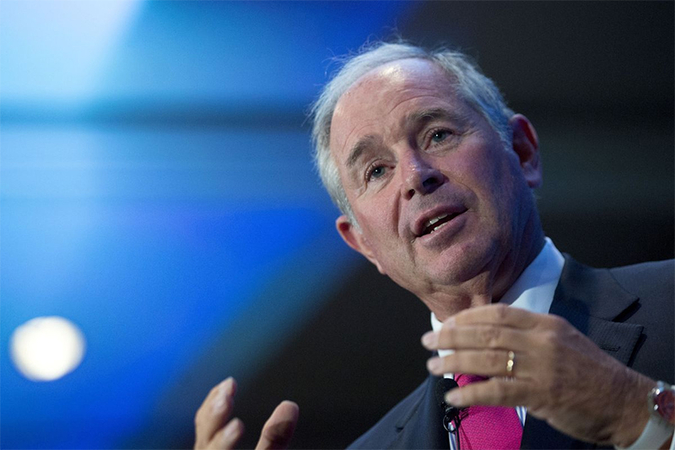 Steve Schwarzman, chief executive officer of Blackstone Group, said the economy is likely to benefit from a V-type recovery in the next few months.

"You'll see a big V in terms of the economy going up for the next few months because it's been closed," Schwarzman, co-founder of the world's biggest alternative asset management firm, said Monday in an interview during the Bloomberg Invest Global virtual event.

While markets are benefiting from both liquidity and optimism that the coronavirus crisis can eventually be contained, Schwarzman said the economy will "take quite a while before we sync up and get back to 2019 levels."

Also at the event, hedge fund manager Bill Ackman said he believes the recovery will begin by year-end and a normalization of the economy in the second half of 2021. Ackman said he sees gradual improvement on all fronts with so many resources poured into the health-care crisis.

The spread of the pandemic seized up credit markets and put an end to Wall Street's longest-ever bull market earlier this year. The damage pushed the Federal Reserve to flood the markets with trillions of dollars in stimulus, which, combined with the easing of lockdown restrictions and hopes for a fast economic recovery, have helped the S&P 500 index rally almost 40% since its March low.

Blackstone has been "aggressively" looking to put some of its $150 billion in dry powder to use, Schwarzman said in April. He also said that while all companies, including Blackstone, will be affected by the pandemic, the pain will be temporary, citing the U.S. government's stimulus efforts. The New York-based firm saw asset values across most of its business segments plunge in the first quarter because of the economic fallout from the virus, but its long-term focus should put it in a position to hang on to companies as they regain strength.

China will continue to grow at double or triple the rate of developed countries, Schwarzman said at Monday's event. It could internalize its markets and depend less on exports, he said.

Schwarzman has strong ties to China. He started a school in the country and has traveled there frequently -- at times functioning as an intermediary between the Washington and Beijing governments. The billionaire has also previously advised President Donald Trump and was present in the White House when he announced the first part of the China-U.S. trade deal.

"It's just not been, in aggregate, a great place for Western investors to put their money," he said.

The Kynikos Associates founder also said that U.S.-based casino operators in Macau, such as Wynn Resorts or Las Vegas Sands, have an additional risk that's not being priced in to their shares, as their concession renegotiations are coming up.

"The majority of their cash flows of Wynn comes from the Macau concession and if that were to be negotiated downwards, which is a real possibility, particularly if the trade wars continue, that would have a material effect on their cash flow and profit," he said.

Chanos also said that the current low-interest-rate environment is providing "easy money," helping companies "that are not playing by the rules to keep the game going for a while."

He said he's giving a lecture Tuesday on 300 years of financial fraud, and one of his key themes is that the fraud cycle follows the business and financial cycle with a lag. As markets roar on, people drop their sense of disbelief and begin to believe things that are actually too good to be true, he said. That's why companies with questionable business models still get funded, he said.

It's not until the markets "turn down that people get a lot more conservative with their money and begin to question business models," Chanos said. "People don't realize they are being defrauded until they want their money back. So I think that wave of realization is still ahead of us."