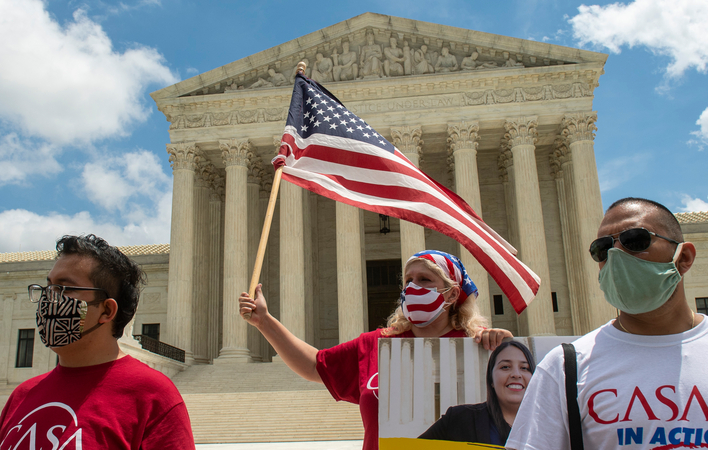 WASHINGTON - President Donald Trump issued a proclamation Monday barring many categories of foreign workers and curbing immigration visas through the end of the year, moves the White House said will protect U.S. workers reeling from job losses amid the coronavirus pandemic.

The restrictions will apply to work visas that many companies use, especially in the technology sector, landscaping services and the forestry industry. It excludes agricultural laborers, health-care professionals supporting the pandemic response and food service employees, as well as some other temporary workers.

The restrictions will prevent foreign workers from filling 525,000 jobs, according to the administration's estimates. The measures will apply only to applicants seeking to come to the United States, not workers who already are on U.S. soil.

"American workers compete against foreign nationals for jobs in every sector of our economy, including against millions of aliens who enter the United States to perform temporary work," the proclamation states. "Under ordinary circumstances, properly administered temporary worker programs can provide benefits to the economy. But under the extraordinary circumstances of the economic contraction resulting from the COVID-19 outbreak, certain nonimmigrant visa programs authorizing such employment pose an unusual threat to the employment of American workers."

Critics of the moves say the president is using the public health crisis to carry out the kind of border closures and immigration overhaul he has long extolled, giving him the opportunity to campaign on the measures in his bid for reelection. Trump in recent months has carried out a broad crackdown at the Mexico border and has barred travelers from China and European nations with large coronavirus outbreaks.

Major U.S. businesses broadly panned the president's proclamation. The U.S. Chamber of Commerce, which had lobbied to soften the limits for months, said Trump adopted a "severe and sweeping attempt to restrict legal immigration" that could hurt the country's economic recovery amid the pandemic.

"Putting up a 'not welcome' sign for engineers, executives, IT experts, doctors, nurses and other workers won't help our country, it will hold us back," said Chamber president Thomas Donohue. "Restrictive changes to our nation's immigration system will push investment and economic activity abroad, slow growth, and reduce job creation."

The freeze announced Monday will apply to the H1-B visa category for highly skilled workers, the H4 visa for their spouses and the L visas companies use to transfer international employees into the United States.

Most H2-B visas - for temporary workers who would stay in the United States for up to three years - also will be suspended, the officials said, with exceptions for hospitality and food service employees. The freeze on "cultural exchange" J visas will include exemptions for applicants whose entry is considered to be in the U.S. national interest, a loophole potentially available to the roughly 20,000 people who come to the United States annually as au pairs to provide child care for U.S. families.

Visa processing at U.S. consulates abroad already has plunged. State Department visa statistics show the number of nonimmigrant visas issued each month has dropped more than 90 percent since February. Last month, the United States granted just more than 40,000 nonimmigrant visas - which include visas for tourists and other short-term visitors - down from 670,000 in January, the data shows.

Trump administration officials also said Monday that they would issue new regulations denying work authorization to asylum seekers with pending claims for one year, arguing that the humanitarian program is being exploited by migrants seeking better work opportunities in the United States. Administration officials have not said how asylum applicants will be expected to support themselves financially while they await a court decision.

Trump on April 22 ordered a 60-day freeze on several categories of family- and employment-based immigration visas, and that suspension now been extended through the end of 2020. While U.S. citizens can continue to sponsor spouses and minor children, Trump's orders will bar most other categories of applicants, affecting more than half of the immigration visas issued in a typical year; last year, about 460,000 immigration visas were issued.

Trump's orders, which the White House has described as "a pause," do not apply to immigrants already living and working in the United States nor to permanent residents seeking to become naturalized citizens.

As part of the April 22 decree, Trump directed federal agencies to study the possible impact of additional restrictions on work visas. The new measures will apply to several categories of "J" or "cultural exchange" visas, including foreign camp counselors, summer-school teachers and other short-term workers.

Major businesses for weeks had urged the Trump administration not to adopt additional restrictions on foreign workers, fearing lasting impacts on the labor force at a time when many companies are struggling financially amid the coronavirus outbreak.

Trump's move quickly drew sharp rebukes from Apple, Facebook, Google and a wide array of other tech giants, which sounded off through a flurry of Washington-based lobbying groups.

"Today's executive action stands to upend the ability of U.S. employers - in the tech sector and beyond - to hire the men and women they need to strengthen their workforce, repower the economy, and drive innovation," said Jason Oxman, president of the Information Technology Industry Council.

TechNet president Linda Moore said the new White House policy would "slow innovation and undermine the work the technology industry is doing to help our country recover from unprecedented events."

Many tech companies had lobbied for years to convince Trump to spare a raft of immigration programs he has since terminated or tried to limit. They supported lawsuits against the president's earlier travel bans, for example, and vehemently opposed his effort to end the program known as DACA before the Supreme Court ultimately reversed it last week. Some top Silicon Valley executives, including Apple chief executive Tim Cook, have sought to appeal to Trump directly on immigration.

But the president's order Monday amounts to a direct shot at the industry, which relies on H-1B visas to employ foreign engineers and H-4 visas to secure authorizations for their spouses. Apple, Facebook and Microsoft did not immediately respond to requests for comment Monday.

"America's continued success depends on companies having access to the best talent from around the world," Google spokesman Jose Castaneda said in a statement. "Particularly now, we need that talent to help contribute to America's economic recovery."

Trump administration officials have defended the restrictions as a sensible measure to protect U.S. workers amid unemployment levels that are the highest since the Great Depression. The measures will be subject to review and modification every 60 days, according to the proclamation.

A Washington Post-University of Maryland poll published last month found that 65% of Americans support a temporary halt on nearly all immigration during the pandemic, with 34% opposed. Republicans and independents support such restrictions by a wide margin, the poll found, while Democrats were split.

Mark Krikorian, whose Center for Immigration Studies has urged the Trump administration for years to adopt such restrictions, called Trump's order "a significant victory over corporate interests."

Krikorian and others in the GOP who favor such restrictions have long argued that guest worker programs displace U.S. workers and drive down their wages. They have been battling other Republicans for control of the party's immigration platform.

"This is a victory for the immigration hawks within in the White House," Krikorian said. "Maybe it took the pandemic to help them overcome the pressure from lobbyists to keep the cheap labor coming."