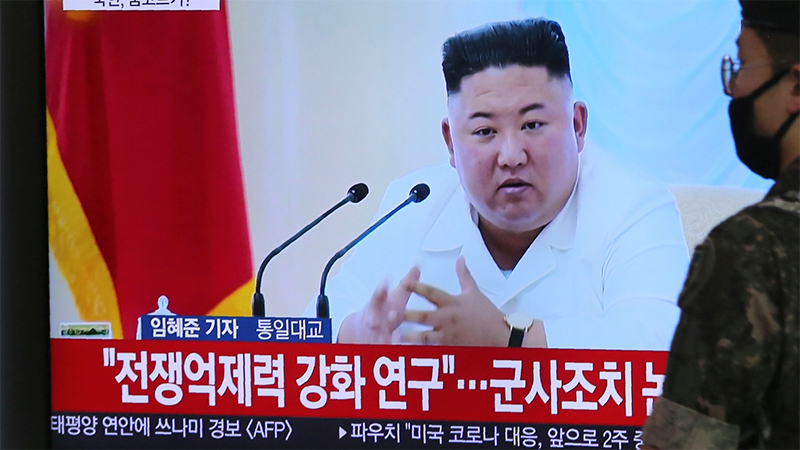 SEOUL, South Korea - North Korea said Wednesday its leader Kim Jong Un has suspended planned military actions against South Korea, pulling back from weeks of tension building on the Korean Peninsula amid a stalemate in nuclear negotiations with the United States.

North Korea has long used a strategy of escalating and de-escalating tensions to help win concessions from its neighbors and powerful rivals.

Over the past few weeks, North Korea has been dialing up its campaign against the South, threatening military actions unless the Seoul government stops anti-Pyongyang activists from sending propaganda leaflets across the border.

Earlier this month, North Korea severed phone hotlines with the South and blew up an inter-Korean liaison office, destroying the symbols of a fleeting rapprochement on the peninsula.

A dramatic U-turn in the hostile policy was announced by the North Korean leader at a video conference meeting of the country's Central Military Commission, which was reported via North Korea's state media on Wednesday.

"At the preliminary meeting, the [commission] took stock of the prevailing situation and suspended the military action plans against the South," the Korean Central News Agency said. The state media report did not give specific details on the military measures that had been under consideration.

The report also said the committee discussed "documents carrying the state measures for further bolstering the war deterrent of the country."

North Korea's military vowed last week to reoccupy border zones that had been demilitarized under agreements with the South. The Korean People's Army had said it would resume military exercises and reestablish guard posts in the border areas where troops had previously been withdrawn as part of tension-reducing agreement with South Korea.

South Korea's Defense Ministry had responded by describing the threatened military actions as a violation of the peace accords, and warned North Korea that it will "definitely pay the price" if it breaks them.

Seoul's Unification Ministry that oversees relations with North Korea, said on Wednesday it is monitoring the situation and maintains its stance that the inter-Korean military accords should be maintained.

North Korea has been ramping up its provocations since a summit between Kim and President Donald Trump last year ended without a deal due to disagreements over lifting sanctions put in place because of North Korea's nuclear weapons development.

Pyongyang has increasingly been pressuring Seoul to break away from Washington and advocate North Korea's interests.

Kim's powerful sister Kim Yo Jong last week criticized South Korean president Moon Jae-in as "servile" and acting in the interests of his "master" Washington rather than Pyongyang.

Security analysts said the North Korean leader, after weeks of deliberate tension building, is putting a brake on the hard-line drive out of concerns over a military backlash and to leave room for diplomatic negotiations.

Cheong said North Korea, through recent provocations, had gained enough concessions from South Korea including the Seoul government's recent pledge to regulate the anti-regime activists from sending leaflets. "North Korea would have concluded that it has more to lose than gain by taking a step further (in provocations)," he said.