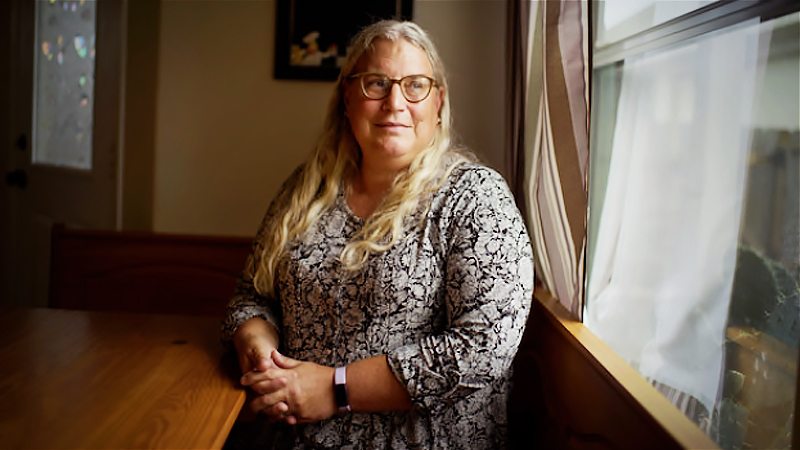 Brynne Soukup at her home in Dayton, Texas, on June 20. MUST CREDIT: Photo for The Washington Post by Mark Felix

Brynne Soukup was in the middle of a work phone call from her bedroomin Dayton, Texas,when a friend sent her a link to the news on Facebook. "Look, look!" Soukup, 49, whispered to her partner, Kerri Pettit. "I can't believe it. That's huge."

In a landmark 6-to-3 decision, the Supreme Court ruled on June 15 that federal sex discrimination protections extend to gay and transgender workers like Soukup, making clear that employees cannot be fired under federal law simply because of their gender identity or sexual orientation.

Within days, Soukup's lawyers filed a federal lawsuit against Frontier Airlines citing the ruling, accusing the company of discrimination, retaliation and "perpetuating a severe and pervasive hostile work environment" that contributed to Soukup's termination in February 2019 as a regional operations manager for a staffing and ground services provider for commercial carriers.

"If they're willing to do that to me, what about the general public? The person that comes up and is checking in? What about a flight attendant?" Soukup said. "As a company, they need to do better. You just don't do that to people."

Jennifer F. de la Cruz, a spokeswoman for Frontier Airlines, said in a statement, "It is our policy to not discriminate based on gender, race, ethnicity, age or sexual orientation." She added that Soukup was never an employee of Frontier Airlines. Soukup's former employer, Flight Services & Systems LLC, did not respond to requests for comment.

Soukup's lawsuit is the start of what legal experts anticipate will be a wave of litigation testing a Supreme Court ruling that many in the LGBTQ community are comparing to the legalization of same-sex marriage in 2015.

Much like the marriage equality ruling helped shift public opinion toward gay rights, LGBTQ advocates hope this decision will spur more inclusive workplaces for the transgender community - especially in the 25 states, including Texas, Alabama, South Carolina and Indiana, that did not previously mandate such protections.

"What's going to happen is people will be willing to take more risks being public about who they are, earlier perhaps," said Sydney Duncan, a transgender woman and pro bono attorney in Birmingham, Ala., focused on LGBTQ rights. "That's not to say this has been some elixir for the stigma we face down here in the South sometimes, but I think it's going to help ... define the narrative around being trans."

While many of the largest corporations in these states had already put in place policies against discrimination on the basis of sexual orientation and gender identity, the ruling will probably prompt smaller and closely held companies to reconsider these issues, said Paul Smith, a professor at Georgetown Law School who argued the landmark 2003 Supreme Court case Lawrence v. Texas, in which the court ruled that laws prohibiting private activity between consenting gay adults are unconstitutional.

"Suddenly, the whole nature of the relationship between LGBT people and their employers in many parts of the country is going to be fundamentally changed," Smith said.

In addition to asserting their rights in court, he said some LGBTQ employees may feel more confident pushing back against discrimination in the workplace, or being open about their identities with colleagues.

Although the Equal Employment Opportunity Commission decided in 2015 that gay and transgender individuals were federally protected, the outcome of such cases remained uncertain in the courts until the Supreme Court ruling.

Daroneshia Duncan-Boyd, a transgender woman in Birmingham, said she hopes the ruling will bolster an EEOC complaint, pending for years against a former employer she alleges fired her after harassing her for her gender identity about five years ago.

Aiko Herbert, a transgender man in Columbia, S.C., said the ruling has motivated him to consider legal action against a former employer he says fired him in March, shortly after he began testosterone treatment. Even if he doesn't end up pursuing a case, he said, "I don't have to feel like I'm walking on egg shells because of my identity."

The ruling gave one conservative Catholic the "peace of mind" to consider coming out at work - a TV news station in a small, rural town in north-central Texas. The news producer still uses a male name and pronouns in public, but has identified privately as Stephanie since age 11, and has begun looking into resources at a local transgender center. The Supreme Court ruling, Stephanie said, was "liberating."

"I have already started telling people at work, and am painting my nails regularly now," said Stephanie, 37, who asked not to be identified by a full legal name because of workplace concerns.

For Soukup, the ruling provided a clear-cut cause of action for her discrimination lawsuit against Frontier Airlines, her lawyers said.

Soukup had worked in the aviation industry for more than two decades before she landed a dream promotion with her employer, Flight Services & Systems, in February 2018, managing ground handling and wheelchair services for major airlines at eight airports, according to the lawsuit.

As she traveled to airports across Texas and the South, no one ever asked about her personal life, and that's how Soukup liked it. Nearly a decade earlier, she had legally changed her name and begun living openly as a woman. But she said she had never felt the need to talk about her transgender identity. As far as any of her colleagues or bosses knew, she was simply Brynne.

All of that changed in late 2018, the lawsuit says, when a subordinate told Soukup about a disturbing conversation with a manager at Frontier Airlines. The airline was one of the company's most important clients, the lawsuit says, and had significant control and influence over FSS employees.

According to the lawsuit, a subordinate told Soukup a Frontier manager had used demeaning and derogatory terms about her.

"That he-she is a waste of space" the manager allegedly told the subordinate. A different subordinate told Soukup the same man again outed her, saying, "you know (Soukup) is a transgender, right?" according to the lawsuit. Frontier did not offer a response to Soukup's lawsuit. FSS did not respond to requests for comment.

Soukup said she reluctantly complained about the manager's alleged harassment to the human resources department at Frontier Airlines and to FSS management in January 2019.

On Feb. 6, 2019, a human resources representative from Frontier said the company had concluded a "complete and thorough investigation" but did not outline any actions it had taken to address the complaint, and did not contact Soukup for any additional information, the lawsuit alleges.

Less than a month later, Soukup received unexpected news: Her company was demoting her, putting her on probation and requiring her to move to New Orleans - hundreds of miles from her home, at that time in Austin - or else she would be fired, she alleged. Despite never having had a negative evaluation, Soukup says, the new role would move her from overseeing the managers at eight airports to managing one airport with only five flights a week. Meanwhile, the Frontier manager she says disparaged her remained employed by the company, according to the lawsuit.

"Here I've done nothing but excelled in the job, and because of who I am you feel like you have to make me go away?" Soukup said in an interview. "It really hits hard when you know it's because of your core being."

The benefits office later reversed its decision, allowing her to collect unemployment.

After her termination, Soukup began the administrative process needed to bring a lawsuit against Frontier Airlines and her former employer. But she faced an uphill battle in Texas, which had no explicit protections against employment discrimination on the basis of sexual orientation or gender identity. And had the Supreme Court justices ruled against the LGBTQ protections this month, Soukup's case would have had little hope of holding up in a federal court.

"They could have easily killed it," Soukup's lawyer, Daniel Ross, said. "Instead they went ahead and opened the door for it."

Greg Nevins, senior counsel at Lambda Legal, said the ruling means LGBTQ workers "now have a seat at the Title VII table," referring to the law that protects employees against discrimination based on race, color, national origin, sex and religion.

"That doesn't mean we're going to enjoy the meal that's being served," Nevins said. "But there won't be this anvil around your neck that you have to get rid of before you can start to litigate."

"Religious liberty will be used as a defense, as a shield, but will it be strong enough against all these new lawsuits in all these new areas? I believe it should be, but we don't know," Shackelford said. "How do they protect themselves and how do they follow their faith requirements in the best way they can and not be all of a sudden embroiled in lawsuits?"

Soukup knows the ruling does not guarantee her case will be successful; only a tiny percentage of discrimination lawsuits against employers result in a judgment in the plaintiff's favor. And even after last week's news, her celebration was a quiet one.

She saw several friends on Facebook post comments criticizing the Supreme Court ruling. She still didn't feel comfortable saying anything to colleagues at her new job, at a company called Sage Parts, which supplies replacement parts for ground support equipment. None of her colleagues knew about her identity before the filing of the lawsuit.

"Just because there's a law that doesn't necessarily change how somebody thinks," Soukup said.