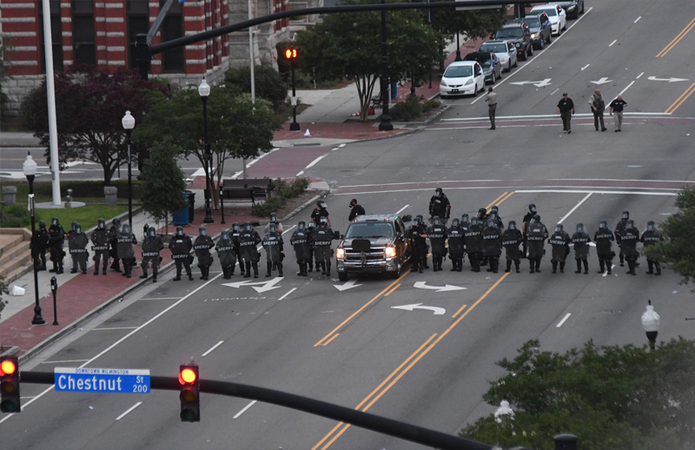 WILMINGTON, N.C. - The police officers were discussing work when their conversations moved, as so many have recently, to the protests against racial injustice rippling across the country.

Their words quickly turned hateful. One officer used racist slurs to assail a black judge and a black woman he had arrested, while another described feeling like a civil war was coming and described his plans to go out and buy an assault rifle.

Their conversations in early June likely would have remained between them, except for a squad car camera that was accidentally activated and recorded the rhetoric. The private racial vitriol among officers in the public trust was discovered the next day by a department official. On Wednesday, Wilmington Police Chief Donny Williams said his department had fired the three officers due to their "brutally offensive" conversations.

"There are certain behaviors that one must have in order to be a police officer, and these three officers have demonstrated that they do not possess it," said Williams, a black officer who had risen to the department's top job less than 24 hours earlier. "There is no place for this behavior in our agency or our city, and it will not be tolerated."

Williams's action came as policing leaders and elected officials across the country are wrestling with crises both internal and external as they confront a nationwide wave of protests against police violence and racial injustice as well as high-profile examples of misconduct within their own ranks.

As demonstrations have spread in the wake of George Floyd's killing in Minneapolis, major pushes for reform and cutting police funding also have risen from coast to coast. Longtime criticism of police tactics and officers' interactions with minority populations has turned into alarm at how police have acted and used force, both before and during the protests.

While some states and local officials have adopted changes since the protests began - including banning some uses of force and increasing transparency - attempts to advance police reforms in Congress have stalled due to partisan differences.

"Policing is done at the local level . . . we're not going to find a solution at the federal level," Charles Ramsey, who formerly led the police department in the District of Columbia and Philadelphia, said Thursday during an online U.S. Conference of Mayors discussion that included mayors, police chiefs and experts. "It's the mayors, it's the governors, it's those people that really understand the needs of communities that'll get this done."

But the impact of the renewed scrutiny has been significant in police departments, reverberating through the uppermost ranks of numerous big-city forces.

"We're in a period of time now I've never seen in all my time in policing," said Chuck Wexler, executive director of the Police Executive Research Forum, which works with law enforcement agencies.

Police chiefs are rarely in their jobs for long, usually between three and five years, Wexler said. But a remarkable number of high-profile top cops have lost their jobs or said they will step down since Floyd's death as a result of incidents in their cities, including in Atlanta, Richmond, Nashville, Portland, Ore., Louisville and Prince George's County, Md.

Officials also have sought to punish officers over how they used force in protests and during other encounters with the public. In Atlanta, six officers were charged as a result of their actions during protest responses, then two more were charged in relation to the fatal shooting of Rayshard Brooks, a 27-year-old black man, at the hands of police after a DUI stop on June 12.

Chris Magnus, the police chief in Tucson, Ariz., also offered to resign Wednesday after releasing video captured two months earlier that showed his officers restraining a Hispanic man, facedown on the ground, as he begged for help. The man later died.

"Given the times we're in, any mistakes of this kind are viewed with great suspicion and contribute to the lack of trust in the police," said Magnus, before offering his resignation to the mayor, "to demonstrate my willingness to take accountability for these mistakes."

Policing can be grueling work that often wears on the people doing it, in part because of the nature of the job and its life-or-death decisions, according to experts and officials. Many officers across the country say they feel under attack due to the actions of a few, but activists and protesters argue that systemic racism, abuse and brutality within police departments has been overlooked and allowed to go on for far too long.

While the beginning steps of reform attempts are now underway, current and former police chiefs said that frequent turnover of top police officials can hinder efforts to improve their police departments.

"What will destroy reform efforts is a revolving door of police chiefs," said Art Acevedo, Houston's police chief. "Right now you have these politicians that are succumbing to the pressure of the day and not being strategic . . . It takes persistence and courage from public officials to not succumb to public pressure."

In Wilmington, Williams called the case involving his officers' racist conversations "the most exceptional and difficult" of his career. He immediately pushed for new policing reforms.

Activists in the predominantly white coastal North Carolina city, where the police department's policy manual directs its officers to "recognize the badge of my office as a symbol of public faith," welcomed the dismissals of the officers.

The three men - Cpl. Jesse E. Moore II, 50; Officer Michael "Kevin" Piner, 44; and Officer James Gilmore, 48 - were recorded in conversations on June 3, according to police. In the recordings, captured in Piner's car, he was shown speaking first to Gilmore while their vehicles were next to each other.

During that conversation, Gilmore referenced a social media video of white people "bowing down on their knees and 'worshiping blacks,' " according to a report released by the police department. Piner also remarked, the report said, that their department only cares about "kneeling down with the black folks."

Later, Piner received a call from Moore, who repeatedly used racist slurs to refer to a woman he had arrested the previous day, the report said. Moore also described a judge with similar slurs, during which time the two men both denigrated black people, the report said. During that conversation, Piner used racist language in describing shooting black people and talked about the need for a civil war to "wipe 'em off the f------ map," the report said.

According to the department, the conversations were discovered the next day. The following week, the three officers were interviewed by other officers, during which the video was played for them.

"Each officer admitted it was their voice on the video," the department said in its report. "They did not deny saying any of the things heard on the video."

The officers all denied being racist, according to the report, and they cited "the stress of today's climate in law enforcement as a reason for their 'venting.' " Hours after Williams announced that the officers were fired, the city temporarily removed two prominent Confederate monuments, citing concerns for public safety around the statues, which have been flash points for demonstrations in Wilmington.

Activists said that while they were glad the officers were fired, it was worrisome that they so brazenly shared the racist views with other officers in the first place.

"For them to be willing to make such statements on duty, in uniform, is a type of comfort that doesn't sit well with me," said Devon Scott, a community organizer who narrowly lost a mayoral bid last year. "It shows that the culture allows it, that it's reinforced and is the status quo."

Jason Mott, a Wilmington resident and author, said he found the officers' language "jarring, but not unexpected."

"I've got a lot of friends in Wilmington who are white, and they are shocked and amazed by all this, but meanwhile, as a black person, we've been screaming about this for decades," Mott said.

The Rev. Dante Murphy, pastor of a missionary Baptist church just north of Wilmington in Pender County and president of the county's NAACP chapter, said the recording "should not come as a surprise to anyone."

"The surprise is that it actually came out, and they were transparent about the whole thing," Murphy said of the police department, noting that the officers have been on the force for many years. "We have to assume this is not the first time."

The officers' words also reverberated through Wilmington's criminal justice system in another way. Ben David, the district attorney for Pender and New Hanover counties, said in an interview that his office will dismiss all 89 pending cases involving the fired officers.

His office has not yet decided whether to file any criminal charges against the officers, and David has asked lawyers and community members involved in other cases the officers handled to contact him if they believe racial bias or other constitutional violations might have occurred. The situation, he said, also had a broader meaning for the justice system.

"It ends up reflecting on everybody," David said, "and not just these three officers caught on a hot mic."