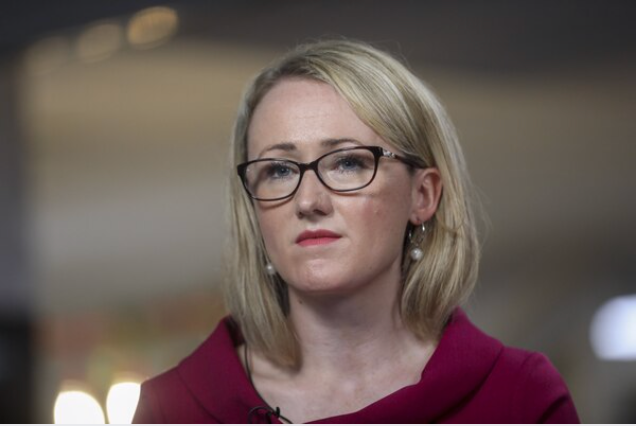 Rebecca Long-Bailey at the Labour Party conference in Brighton, England, on Sept. 24, 2019. MUST CREDIT: Bloomberg photo by Simon Dawson.

Labour leader Keir Starmer fired the U.K. opposition party's education spokeswoman Rebecca Long-Bailey on Thursday after she praised an article in which an actor suggested U.S. police learned from the Israeli secret service to kneel on suspects' necks.

Long-Bailey, runner-up in this year's Labour leadership contest despite running as Jeremy Corbyn's anointed successor, earlier on Thursday tweeted a link to an interview with the actor Maxine Peake, describing her as "an absolute diamond." In the interview, discussing the Black Lives Matter protests, Peake said: "The tactics used by the police in America, kneeling on George Floyd's neck, that was learned from seminars with Israeli secret services."

Corbyn's time as leader was dominated by criticism of his party's record on anti-semitism, and his own previously expressed views. Starmer has put a strong focus on trying to rebuild relations with the Jewish community.

"This afternoon Keir Starmer asked Rebecca Long-Bailey to step down from the Shadow Cabinet," his office said in an emailed statement. "The article Rebecca shared earlier today contained an anti-semitic conspiracy theory. As Leader of the Labour Party, Keir has been clear that restoring trust with the Jewish community is a number one priority. Anti-semitism takes many different forms and it is important that we all are vigilant against it."

Long-Bailey had earlier distanced herself from her previous tweet.

"I re-tweeted Maxine Peake's article because of her significant achievements and because the thrust of her argument is to stay in the Labour Party," she wrote on Twitter. "It wasn't intended to be an endorsement of all aspects of the article."

After her dismissal, Long-Bailey issued a further series of tweets.

"I learned that many people were concerned by references to international sharing of training and restraint techniques between police and security forces," she said. "I wished to acknowledge these concerns and duly issued a clarification of my retweet, with the wording agreed in advance by the Labour Party Leader's Office."

Long-Bailey went on: "After posting I was subsequently instructed to take both this agreed clarification and my original retweet down. I could not do this in good conscience without the issuing of a press statement of clarification. I had asked to discuss these matters with Keir before agreeing what further action to take, but sadly he had already made his decision."

"It's always been said criticism of practices of Israeli state is not anti-semitic," he said in a tweet, saying he would "stand in solidarity" with Long-Bailey.

The pro-Corbyn Momentum Labour group also weighed in, with chairman Jon Lansman, who is Jewish, describing Long-Bailey's dismissal as "a reckless overreaction."

But Starmer's decision won praise from Jewish groups and also from one Jewish Conservative Member of Parliament, Robert Halfon, who said it showed the Labour leader was "a force to be reckoned with."