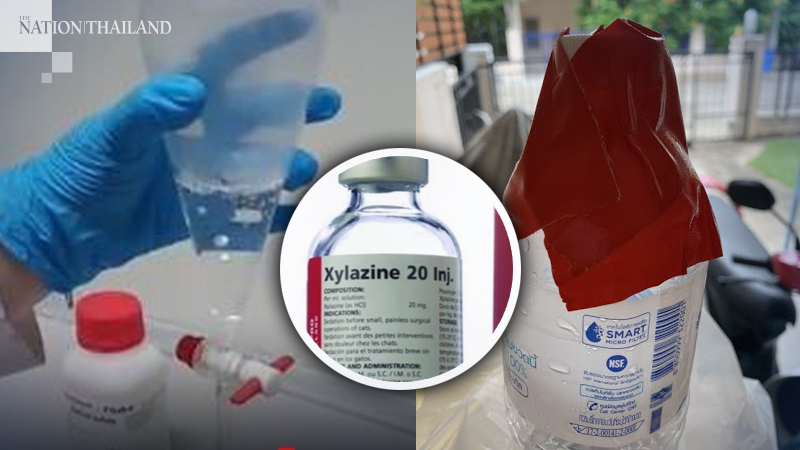 Chemical analysis has confirmed that a runner's water bottle left on a bench in a park near Nonthaburi City Hall was spiked, likely by using a syringe needle.

Weerachai Phutdhawong, a professor at the Department of Chemistry at Kasetsart University, revealed the test results on Friday (June 25).

The professor tested the 60 millilitres of water left in the bottle using a gas chromatograph mass spectrometer and found it contained xylazine (98 per cent) and methyl paraben, etc. Xylazine is an anaesthesia used by veterinarians for animals such as cattle, which veterinarians prefer to use with cats. In 2013, there was a case of the drug being used by criminals to steal property.

He said he suffered from blurred vision, shortness of breath and vomiting after drinking water from the bottle before passing out while hanging out with friends.

He had drunk the "spiked" water after exercising in the morning.The water had a strange taste so he did not finish it, he said, adding that on closer scrutiny, he found a small incision, like by a needle, on the bottle. He then explained his experience on Facebook and warned other runners to be careful.

Prof Weerachai said the victim could have been poisoned by the drink but he escaped as he had consumed only one-third of the bottle.

A needle could have inject the drug into the bottle in 10 seconds, he said.

In 2013, the Food and Drug Administration declared xylazine as a controlled drug. Veterinarians who need to use xylazine must ask for permission first and the general public must not be allowed access, the FDA had said. However, violators can get away easily as there is only a fine for possession, he said. He urged police to repeat the testing he had done at the Department of Medical Sciences to confirm the results.

The victim, Virot, said he was relieved to know the test result as many people claimed he had made up the story. He believed that the thief had possibly set his sights on a smartwatch worth around Bt10,000 that he was wearing. Virot added that henceforth he would not place his water bottle on the bench anymore and would avoid running in that park for a while.