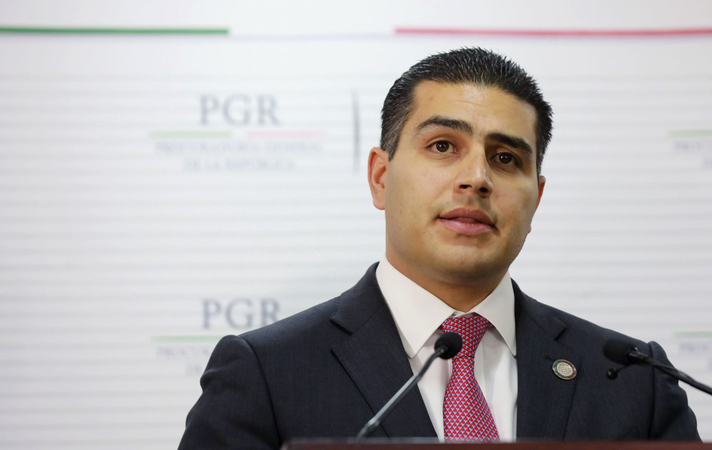 A powerful drug cartel is accused of trying to assassinate Mexico City's security chief in a deadly ambush that marks a new escalation in the years-long war between the government and organized crime.

Omar Garcia Harfuch, head of the capital city's public security, was shot three times when a group of at least a dozen hit-men with high-caliber weapons opened fire in a leafy, upscale neighborhood of Mexico City on Friday morning. Two people in Garcia Harfuch's security detail died, along with a woman who was driving to work, Mayor Claudia Sheinbaum said.

The bloody confrontation turned the normally quiet street into a war zone, with shattered glass littering the ground and an SUV riddled with bullet holes. As police tried to make sense of exactly what happened, details emerged adding to the mystery, including that the attack may have been foretold in intercepted phone calls and a recent newspaper column. Federal Public Security Minister Alfonso Durazo confirmed that threats had been made and said in a news conference that initial information points to the Jalisco New Generation Cartel.

"The Jalisco cartel has become public enemy No. 1," said Falko Ernst, a researcher at the International Crisis Group, a Brussels-based NGO for conflict resolution. "This administration didn't want to engage in open warfare, but it isn't being left up to them."

Garcia Harfuch was rushed into surgery after being shot in the shoulder, collarbone and knee, government officials said.

At least twelve people were arrested in the confrontation that broke out in the neighborhood of Lomas de Chapultepec at a little past 6:30 a.m. and was caught on cameras. Residents reported hearing rapid-fire shots that lasted almost a full minute. The attackers arrived in trucks, including one that bore the Grupo Carso logo. Carso, a Mexican conglomerate founded by billionaire Carlos Slim, said in a statement that the truck didn't belong to the company.

Jalisco New Generation, known by its Spanish acronym CJNG, is infamous for extreme violence and was responsible for one of the nation's deadliest attacks on security forces, when 15 police officers were killed in an ambush in 2015. The U.S. has offered a $10 million bounty on information leading to the capture of the group's leader, Nemesio Oseguera Ramos -- better known by his alias El Mencho.

El Universal columnist Raul Rodriguez Cortes wrote last week that the government had intercepted calls by organized crime groups, which said they were planning to target a top official. The U.S. Drug Encorcement Agency confirmed the calls were legitimate, Cortes said. Mexico then beefed up the security on four top officials that the cartel had reason to target, including Garcia Harfuch, Foreign Affairs Minister Marcelo Ebrard, head of the Financial Intelligence Unit Santiago Nieto and Durazo.

While military-style ambushes and gunfights are common throughout Mexico, it's rare that the bloodshed spills over into the capital city. This week, a car loaded with explosives was seized by authorities in the vicinity of a refinery in the central state of Guanajuato.

Earlier this month, a federal judge and his wife were killed in the state of Colima. In October, Mexican Forces were overpowered by members of Sinaloa Cartel as they attempted to take in the son of Joaquin "El Chapo" Guzman, the world's most notorious drug lord. And in November, at least nine members of a Mormon family, all U.S. citizens, were killed in northern Mexico in a suspected attack by cartels.

President Andres Manuel Lopez Obrador is facing increased pressure to change his national security policies to crack down on worsening violence. The president emphasizes economic development over heavy-handed law enforcement as the only long-term solution. But he's also been criticized for militarizing the country's policing through the newly created National Guard without a plan to deal with underlying corruption.

On Friday, Lopez Obrador was wrapping up a cross-country tour that started June 1 and held his morning news conference in Morelia, in Michoacan state. Lopez Obrador often travels and goes to events without security.

"The president has decided to operate under a model of no security," Durazo said in the news conference. "We are trying to look after his safety, regardless of his tours."

According to researchers at InSight Crime, the cartel is rapidly expanding and has contacts throughout the U.S. and Latin America. It primarily sells marijuana, cocaine and synthetic drugs.

"This comes after a wave of other concerning attacks that we've seen since last year," said Maureen Meyer, Mexico director at the think tank Washington Office on Latin America. Recent attacks suggest Lopez Obrador's strategy "hasn't put a dent in the violence."