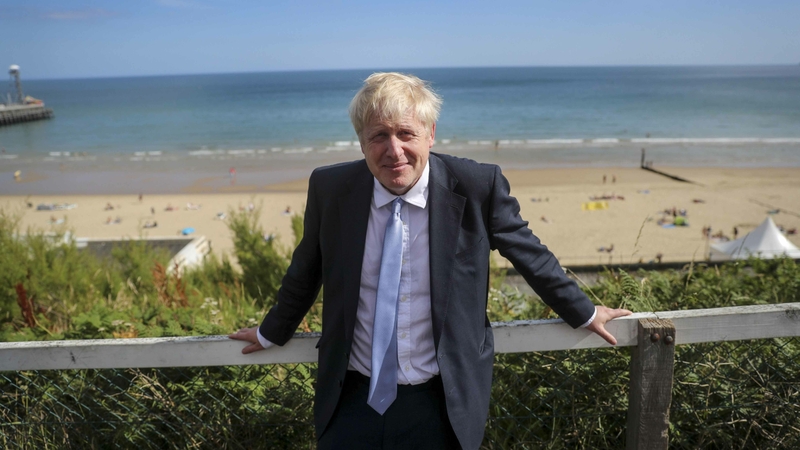 Britain's Prime Minister Boris Johnson poses for a photograph as he departs from a Conservative party leadership campaign event in Bournemouth, U.K., on July 2, 2019. MUST CREDIT: Bloomberg photo by Simon Dawson.

Summer heat saw crowds of daytrippers descend on U.K. coastal resorts, leading one southern town to declare a major incident and Health Secretary Matt Hancock to warn that he could close beaches to head off any potential new round of coronavirus cases.

Bournemouth, Christchurch and Poole Council said emergency services had been overstretched after thousands of people flocked to Bournemouth's beaches, gridlocking roads. Images posted on social media Thursday showed crowds filling the coastal town to enjoy the hottest day of the year so far.

Hancock later told TalkRadio that while he's "reluctant" to close the beaches, the government has that authority. "We do have those powers, and if we see a spike in the number of cases, then we will take action," he said. "The virus doesn't respect the fact that it's a hot summer's day. The virus spreads from social contact."

Prime Minister Boris Johnson has been gradually easing lockdown restrictions, and earlier this week announced that pubs and restaurants will be able to reopen July 4. He also said social distancing rules will be eased, allowing people to come within a meter of those from other households, so long as they take other precautions, such as wearing a face mask.

But until July 4, the requirement remains to stay 2 meters apart, something photos on Twitter suggested wasn't being observed on Bournemouth's beaches.

Speaking to BBC Radio 4 on Friday, Environment Secretary George Eustice denied the beach crowding was linked to the government's decision to ease the lockdown next week, instead blaming hot weather that meant "a lot of people had the same idea."

"The British weather being what it is, perhaps this will be a short-lived phenomenon," he said.

But Chief Secretary to the Treasury Steve Barclay, a member of Johnson's government, said on BBC TV's "Question Time" program the scenes were "very disappointing," and he urged people to show "common sense" and stay 2 meters apart. Chief Medical Officer Chris Whitty also showed his concern, warning that cases of the virus may tick upwards again.

"COVID-19 has gone down due to the efforts of everyone but is still in general circulation," Whitty said. "If we do not follow social distancing guidance, then cases will rise again. Naturally people will want to enjoy the sun, but we need to do so in a way that is safe for all."

Over the past two days, Bournemouth council has collected 41 tons of waste from its beaches, according to a statement on its website. Additional police patrols were brought in and overnight campers were evicted, it said.

"We are absolutely appalled at the scenes witnessed on our beaches," Council Leader Vikki Slade said in the statement. "The irresponsible behavior and actions of so many people is just shocking, and our services are stretched to the absolute hilt trying to keep everyone safe. We have had no choice now but to declare a major incident and initiate an emergency response."

Nationwide, still more than 1,000 people a day are testing positive for the virus, and the latest daily figures showed 149 deaths Wednesday.

Even so, the government' focus is shifting to getting the economy moving again after the three-month lockdown plunged the economy into recession and left the state paying the wages of almost 12 million private-sector jobs.

Chancellor of the Exchequer Rishi Sunak "will give a statement in July which will be all about the next phase, talking about how we green the economy, how we respond with the infrastructure projects," Barclay, the No. 2 at the Treasury, told "Question Time."

"Jobs, particularly for young people, is one of the key challenges before us, and that's very much what we're focused on in the Treasury at the moment," he said.