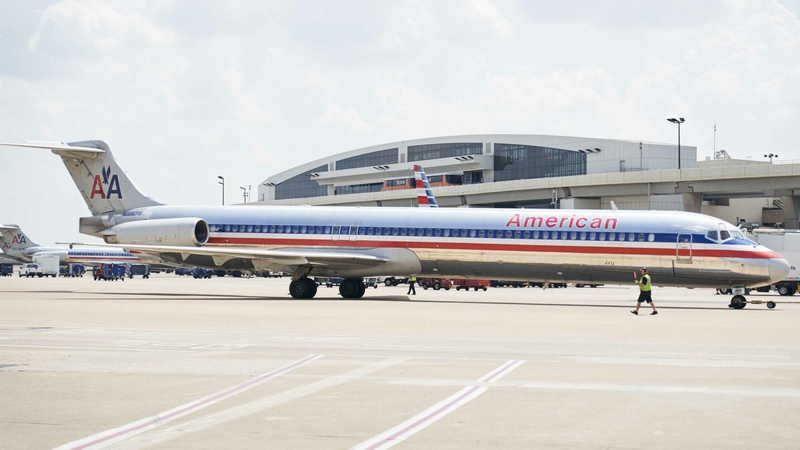 An airport worker guides an American Airlines MD-80 aircraft to a gate at Dallas/Fort Worth International Airport in Texas, on Sept. 1, 2019. MUST CREDIT: Bloomberg photo by Cooper Neill

American Airlines Group said it would sell flights to capacity starting July 1, abandoning caps on passenger loads that were designed to promote social distancing amid the coronavirus pandemic.

Customers will still be notified when they're booked on crowded flights and can move their reservations at no cost, the airline said in a statement Friday. As of June 30, American also will ask customers to certify that they have been free of covid-19 symptoms for the previous 14 days.

American is ditching its restrictions on filling aircraft cabins just as the pandemic worsens in parts of the U.S. that had largely been spared earlier this year. Those areas include states where the carrier has major operations, such as Texas, Arizona and North Carolina. American in April began holding open 50% of middle seats in economy class when possible.

"That was before we had extensive cleaning initiatives, face mask requirements and an extension of waivers for customers," said Ross Feinstein, a spokesman for the Fort Worth, Texas-based airline. "That's the reasoning we ultimately feel it's safe and prudent to lift these restrictions as of July 1."

The airline's shares had tumbled 54% this year through Thursday, in line with other major carriers yet far more sharply than the 4.6% drop in the S&P 500.

The company is changing its booking policy in an industry with no consensus on how crowded flights should be.

United Airlines Holdings hasn't guaranteed to block seats. By contrast, Delta Air Lines has said it will keep middle seats open through Sept. 30. Southwest Airlines has committed to block middle seats unless customers are traveling together.

The Allied Pilots Association, representing 15,000 aviators at American, said it wasn't told in advance that the carrier was changing its policy and questioned why the airline wasn't returning more of its parked aircraft to service to keep passengers separated. The Association of Professional Flight Attendants didn't immediately respond to a request for comment.

American Chief Executive Officer Doug Parker "is right that keeping social distancing on the airplane to six feet is impossible, but that doesn't mean you surrender to it and throw the airplane out there with every seat filled," said union spokesman Dennis Tajer. "It's just not what our passengers are looking for, or our workforce. This is the wrong decision at the wrong time."

To help stem any spread of the virus, American and other carriers have implemented extensive cleaning procedures in airport ticketing and gate areas, as well as on aircraft. The largest U.S. carriers also are requiring the use of face masks, with several airlines pledging to ban customers who refuse to comply.

American also said it has created an advisory panel that includes experts from Vanderbilt University to provide the carrier with the latest scientific research and guidance on disease prevention and cleaning procedures.

After deeply slashing operations when the coronavirus nearly wiped out travel starting in March, American and other carriers have begun adding back some flights in response to an uptick in demand from leisure passengers after months of quarantine.

American will fly 55% of its domestic schedule and nearly 20% of international in July compared with a year earlier.

The average number of daily departures is scheduled at 3,479 in July, compared with 1,807 in May, the airline said. American averaged 6,739 daily flights in July 2019.