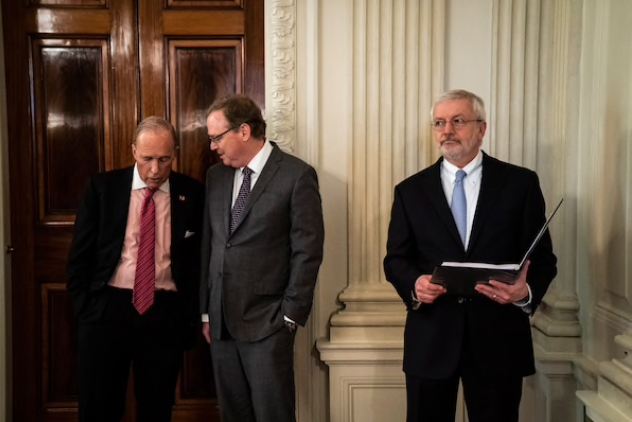 White House economic advisers Larry Kudlow, left, and Kevin Hassett speak before President Trump's roundtable with industry executives at the White House in late April. Josh Bolten, president and CEO of the Business Roundtable, is on the far right. Hassett is one of several economic aides to signal their departures over the past month. MUST CREDIT: Washington Post photo by Jabin Botsford.

WASHINGTON - The Trump administration is facing an exodus of at least a half-dozen senior economic officials even as the economy remains trapped in one of the most turbulent periods in decades.

Bimal Patel, a top deputy to Treasury Secretary Steven Mnuchin, is departing the administration, according to three people familiar with the matter who spoke on the condition of anonymity to discuss internal matters. Patel, who will leave at the end of this week, has played a key role in overseeing the administration's $500 billion small-business rescue program and helps lead Treasury's efforts related to the banking system.

He is the third senior economic adviser in the past week to signal plans to leave the Trump administration, and others have left their roles in the past month. Patel was sworn in to the Treasury post in June 2019.

Patel's planned exit comes as the financial system faces threats from growing signs that many homeowners may not pay their mortgages and some companies may declare bankruptcy or tap out their credit lines. The changes also come at a precarious moment for the U.S. economy, with a spike in coronavirus cases threatening to stall activity and large amounts of federal stimulus aid set to expire. The departures come roughly five months before the 2020 presidential election, and senior officials typically face pressure to stay on through Election Day.

"Patel's departure is concerning because there is still risk to the financial system, although it's diminished over the last several months," said Ernie Tedeschi, a former Obama administration economist, who noted the financial system is in better shape now because of the actions taken by the Federal Reserve and Treasury. "It's not 'Mission Accomplished' yet."

The departures add an additional set of challenges to the administration's daunting task of stabilizing the economy ahead of the 2020 presidential election. President Donald Trump and senior officials have promised a swift rebound as public health restrictions are relaxed, but a spike in coronavirus cases and persistently high unemployment claims threaten the lives of tens of millions of Americans.

Larry Kudlow, the president's top economic adviser, expressed confidence on Monday in a rapid economic recovery and said "the overwhelming evidence is that we're in V-shaped recovery."

Kudlow also said news of the administration's economic departures amounted to "gossip" and that The Washington Post's reporting about the departures were "inaccurate." A White House spokesman did not return requests for clarification about Kudlow's comments.

"Not only do we have a solid staff, Steve Mnuchin is still at Treasury; I'm still at the NEC; we can call Kevin Hassett whenever we want," Kudlow told reporters. "CEA staff is doing a great job under Tyler Goodbody," Kudlow added, an apparent reference to CEA economic official Tyler Goodspeed.

White House officials have also disputed that the departures reflected dissatisfaction with working for the administration or a pessimistic outlook about the 2020 election. Hassett has said he was always planning on returning to the White House for a short time to help with the worst part of the pandemic. Olmem started at the beginning of the administration and has already been replaced by longtime White House policy adviser Francis Brooke.

Philipson clashed with administration officials during his tenure and did not have a strong working relationship with the president or a major role in crafting economic policy. The White House Council of Economic Advisers will probably have a greater role in forming administration policy now that Philipson has departed, according to one person familiar with internal administration matters who spoke on the condition of anonymity to talk candidly. Philipson did not return requests for comment.

Bill Hoagland, senior vice president at the Bipartisan Policy Center and former Republican staff director for the Senate Budget Committee, said he has talked to multiple White House economic officials who have expressed frustration about a lack of direction and guidance on economic policy matters, particularly about the administration's strategy for reopening the country.

"It reflects a great deal of confusion about the path going forward by the Republican economists there and the terrible situation we find ourselves in," Hoagland said of the departures. "It's a high level of frustration, especially at the career staff level."

It is unclear whether the absences will weaken the administration's capacity to craft further response measures to the economic crisis. The most important official in creating economic policy, Mnuchin, has said he will stay on through the election. Kudlow, director of the National Economic Council, is also viewed as unlikely to depart the administration before the election.

Philipson's departure is viewed by administration officials as likely to empower Goodspeed, the remaining member of the Council of Economic Advisers and a former economics professor at the University of Oxford. Goodspeed is seen by some as a possible successor to the top economic post and is viewed as well-liked across much of the administration.

The White House economic team has not been unified in recent weeks as they have debated what to do next about the economy. Sharp White House divisions have emerged over the next round of stimulus spending, with conservative advisers wanting to spend less money and other administration officials pushing for enough to offset the downturn.

The White House has not taken official positions on a range of key economic policy matters still being debated and has confused lawmakers with conflicting signals. White House officials have, for instance, signaled that they are deferring to Congress on small-business relief in the next stimulus package, according to one person in communication with lawmakers who spoke on the condition of anonymity to discuss private conversations.

Some White House officials have privately described being frustrated by the departures but driven by a sense of civic obligation to continue during the perilous economic moment, according to interviews with multiple people in communication with administration officials.

Conservative groups are beginning to draw up lists of potential candidates to fill Philipson's position, one person familiar with the matter said. Two people familiar with the matter said he had been forced out of the administration. Philipson told the Wall Street Journal that he had grown "frustrated with the process of advising the president" and was excluded by "weak advisers."