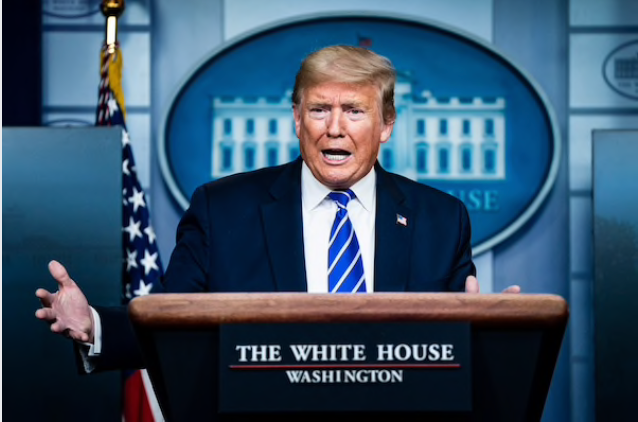 WASHINGTON - The Trump administration said Monday that it has the coronavirus epidemic under control in the United States, but a resurgent outbreak in Sun Belt states continued to worsen - and Jacksonville, Fla., where President Donald Trump plans to pack a convention hall to accept the Republican nomination for reelection, made mask-wearing mandatory.

The World Health Organization warned that the outbreak is far from over and a grim milestone passed Sunday, with the confirmed worldwide death count from the novel coronavirus surpassing 500,000, according to data compiled by Johns Hopkins University. Over the weekend, the number of coronavirus cases reported worldwide soared past 10 million.

U.S. deaths are approaching 125,000, and the total number of reported coronavirus cases topped 2.5 million amid worsening outbreaks in Arizona, Florida and Texas.

Jacksonville, the largest city in Florida and host of the Republican National Convention in late August, announced Monday that masks will be mandatory in public and indoor locations.

"At 5 p.m. today, the City of Jacksonville will be adopting a mandatory mask requirement for public & indoor locations, and in other situations where individuals cannot socially distance," the city announced Monday on Twitter. "Please continue to practice personal responsibility to help stop the spread of this virus."

It is not clear whether the requirement will remain in force at the time of the convention, or whether Trump and attendees would abide by it.

Republicans announced this month that the premier festivities of their convention would be held in Jacksonville instead of Charlotte after North Carolina officials balked at Trump's demand to host a mass gathering amid the coronavirus pandemic.

The GOP began its last-minute search for a new site after Trump threatened to move the event if he couldn't get a commitment that big crowds would be permitted. RNC officials had called for a convention with tens of thousands of attendees. They pledged to conduct temperature checks and make masks available.

Jacksonville spokeswoman Nikki Kimbleton told The Washington Post that whether the mandate applies to the convention will be addressed "as we get closer to the event," noting that it is still two months away.

Trump refuses to wear a mask in public and his administration has sent mixed signals on the increasingly politicized issue for weeks. Few around the president wear masks despite federal guidelines that they be worn as a barrier to spread of the virus. But the rebound in cases may be changing that.

Vice President Mike Pence did not wear a mask Friday as he led the first public briefing on the pandemic in two months, but he did so during a trip to hard-hit Texas on Sunday and issued a public call for Americans to follow suit.

Pence conferred with governors and others out of sight of news cameras Monday and plans to travel to Florida and Arizona, two of the states with spiking cases, for meetings this week with governors and health teams. He canceled planned campaign events in those states because of the reversal in progress against the virus, but he did hold one Sunday in Texas, where caseloads are also rising.

Arizona saw another record high in hospitalizations days after Trump visited the state for a raucous indoor rally during which almost no one wore a face mask.

Florida reported more than 5,200 new cases of the coronavirus Monday and at least 28 deaths, bringing the total number of cases and deaths in the state during the coronavirus pandemic to more than 146,000 and about 3,500, respectively.

Although the new daily case number was lower than the day before, as a rolling seven-day average it was a record high at 6,589, according to data compiled by The Washington Post.

For the past 22 days, the rolling average in Florida has set a record each day. Other states are on similar streaks - South Carolina has set a record on its rolling seven-day average for 21 days, while Texas has for 19 days.

"We're aware that there are embers that need to be put out," White House press secretary Kayleigh McEnany said during a news briefing.

She cited a decline in mortality rates and the advent of effective drug and other treatments as making "us uniquely equipped to handle the increasing cases that we've seen."

Despite rising infection numbers across the United States, most Americans don't believe their state was too fast to reopen, according to a new CBS News-YouGov poll.

Still, many of the respondents expressed personal reservations about attempts to return to normal, with a majority saying that they feel no more or less at risk than they did a few months ago.

The poll also found widespread dissatisfaction with Trump's handling of the crisis, with 72% saying the administration was unprepared to respond to the pandemic. Seventy-three percent said the U.S. death toll could have been lower if plans to combat the outbreak had been in place sooner.

Although Trump points to what he calls a low death rate, the United States has performed poorly when compared with other nations, with more cases and more deaths as a share of the population.

The surging number of cases could result in nearly half the country infected with the virus by the end of this year, and overall deaths are likely to return to more than 1,000 a day, according to former Food and Drug Administration commissioner Scott Gottlieb.

During much of the spring, more than 1,000 people a day in the United States typically died of covid-19, the disease caused by the novel coronavirus, but that number had declined to an average of less than 600 a day last week.

"By the time we get to the end of this year, probably close to half the population will have had coronavirus, and that's if we just stay at our current rate," Gottlieb said in an interview with CNBC's "Squawk Box."

Gottlieb said parts of the country are showing signs of serious community spread that will probably increase in the coming weeks. He named Florida, as well as Georgia and South Carolina.

Younger people appear to be the most affected in those states, which means that death rates and hospitalization numbers might not be as severe as they were in the first wave, but all that could change with transmission, he said.

The World Health Organization plans to send a team to China next week to try to understand the origins of the novel coronavirus, Director General Tedros Adhanom Ghebreyesus said at a news briefing Monday.

"We can fight the virus better when we know everything about the virus, including how it started," Tedros said. "We hope that will lead into understanding how the virus started and what we can do for the future to prepare."

The statement came as Tedros and other WHO officials marked six months since the organization received the "first reports of a cluster of cases of pneumonia of unknown cause in China" - what would eventually be categorized as SARS-CoV-2 and widely known as the novel coronavirus.

"We all want this to be over. We all want to get on with our lives," Tedros said. "But the hard reality is this is not even close to being over."

Their demand comes with cases spiking dramatically in a number of states but little urgency to respond from congressional Republicans and the White House.

"The nation has seen a dramatic surge in both cases and deaths caused by the COVID-19 pandemic. Adding to that pain, our economy is facing one of its greatest challenges since the Great Depression. Over one-fifth of the workforce has requested unemployment assistance," Pelosi and Schumer wrote in a letter to McConnell. "Now is the time for action, not continued delays and political posturing."

Senate Republicans and the White House have been targeting late July for putting together another coronavirus bill, after passing four bills in March and April pumping about $3 trillion into the economy.

Economic signals continue to be mixed.

Pending home sales surged by a record 44.3% from April to May, marking a major rebound after two months of declines amid the economic fallout from the virus.

Based on contract signings, the housing data published by the National Association of Realtors shows the largest month-over-month gain since the organization began sharing the survey in 2001. But while the figures highlight how parts of the economy may be recovering from the shocks of nationwide shutdown measures, contract signings are still down 5.1% compared with May 2019.

Homeowners are probably taking advantage of low interest rates, which the Federal Reserve has pledged to keep near zero for at least several years.

Meanwhile, the shutdown of Broadway's 41 theaters will continue at least until Jan. 3, the industry's leading trade group announced Monday. The action further extends the darkening of Broadway's marquees that began March 12, as the pandemic spread in hard-hit New York.