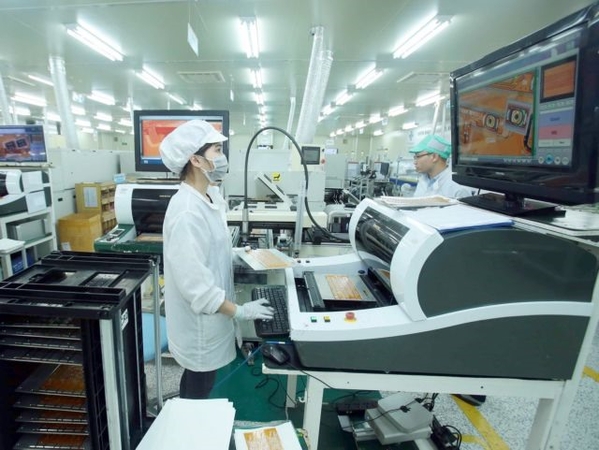 Workers produce electronic parts in 4P Company in the northern province of Hưng Yên. Manufacturing was the driving force of the Vietnamese economy in the first six months of this year with an expansion of 4.96 per cent. — VNA/VNS Photo Phạm Kiên

HÀ NỘI — Việt Nam’s gross domestic product (GDP) expanded 1.81 per cent year-on-year during the first half of this year, the lowest six-month growth pace since 2011, according to the General Statistics Office (GSO).

“As the Government prioritised the fight against the COVID-19 pandemic over economic growth, a positive growth rate in January-June still indicates strong efforts of both the Government and society to maintain business operations while combating the COVID-19 pandemic,” said GSO Deputy General Director Nguyễn Thị Hương at a press conference on Monday.

The IMF said it expected the global economy to recede by 4.9 per cent compared to a 3 per cent contraction previously forecast in April, adding that this prediction is much worse than during the 2008-09 financial crisis.

The fund, however, has forecast Việt Nam's economy to grow 2.7 per cent this year, the highest in Asia.

Amid the gloomy forecasts for global economic growth, the positive GDP result for Việt Nam had shown the determination and efforts of the country’s whole political system in the fight against pandemic and its priority for people’s health and lives, even at the expense of economic benefits, Hương said.

“This is a solid foundation for the Vietnamese economy to sustain growth and avoid contraction. The data show all-level authorities, enterprises and people’s success in concurrently combating the pandemic, maintaining production and business activities, and gradually bringing the economy to the pre-pandemic status.”

GSO reported on Monday that in the second quarter, Việt Nam’s GDP rose by just 0.36 per cent year-on-year, which was the lowest since quarterly records began in Việt Nam 30 years ago, said Dương Mạnh Hùng, director of the System of National Accounts Department.

This was attributed to the economy being hit hardest by the COVID-19 pandemic in Q2, when the Government ramped up social distancing measures, the GSO said, adding that the agro-forestry-fisheries sector grew 1.72 per cent, industry-construction rose 1.38 per cent, while the services sector contracted 1.76 per cent between April and June.

Manufacturing and processing was the driving force of the economy in the first six months with an expansion of 4.96 per cent, along with wholesale and retail with a growth rate of 4.3 per cent, as well as finance, banking and insurance with 6.78 per cent.

Two months after the end of social distancing in Việt Nam, economic activities have gradually returned to normal and led to a surge of 27.9 per cent month-on-month in new business formations to 13,700 in June, according to the GSO.

This month also witnessed a sharp month-on-month increase of 23.4 per cent in combined registered capital to VNĐ139.1 trillion (US$5.97 billion). Employees recruited by new enterprises rose 9.4 per cent to 100,000.

The GSO informed that 25,200 enterprises resumed operations, up 16.4 per cent against the comparable period last year, bringing the total number of newly-registered and reinstated enterprises in the six-month period to 87,200, down 1.5 per cent year-on-year.

During this period, the number of enterprises that temporarily ceased operations surged 38.2 per cent year-on-year to 29,200.

The number of enterprises which completed procedures for bankruptcy fell 5 per cent to 7,400.

GSO Deputy General Director Nguyễn Thị Hương said seven out of 11 key commodity and services groups posted increases, of which, transportation saw the highest increase as the prices of petroleum products climbed after a long losing streak since the Lunar New Year and the prices of pork continued to escalate in early June.