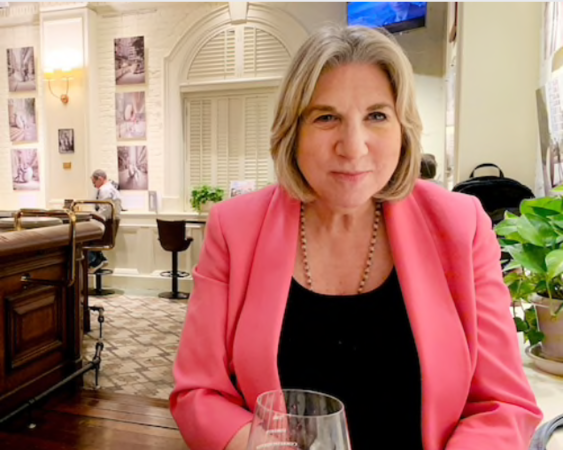 Jodi Schneider, president of the Hong Kong Foreign Correspondents' Club, at the club's bar. MUST CREDIT: Photo for The Washington Post by Jeff Stein

When Bloomberg News editor Jodi Schneider took the reins of the Hong Kong Foreign Correspondents' Club (FCC) in the summer of 2019, she expected the side gig running the legendary watering hole for journalists, business people, diplomats and spies to be fun, not to mention a nice entry on her résumé.

At the time, Hong Kong, known mostly as a financial center and tourism hub, was pretty much a news backwater. Then suddenly everything changed. The port city erupted in massive waves of pro-democracy protests. Frantic police were soon attacking not only the demonstrators, but also the reporters and local "citizen journalists" supporting them. "Two weeks after I became president, the protests started," Schneider says. "Hong Kong itself [became] the story, and the FCC itself a player."

The turmoil steered the club into an unexpected political vortex and turned Schneider's easygoing gig into a delicate balancing contest with the increasingly harsh Beijing-backed authorities. Schneider and her board quickly released statements in support of a free Hong Kong press, which is guaranteed under the "one country, two systems" deal Britain extracted from Beijing when it relinquished control of the island in 1997. "But we thought, well, we want to go beyond that" and directly engage the police, Schneider says.

In October and again in early June, Schneider met with the Hong Kong police to express concerns about reporters being roughed up, arrested and prohibited from recording paramilitary "dispersal operations." "We reminded them that press freedom is a right guaranteed under Hong Kong law, which the representatives acknowledged," the FCC said in a statement after the June meeting.

The club also challenged authorities - who hold the lease on the club's building - by featuring pro-democracy voices at newsmaker luncheons and hosting videotaped panel discussions on topics such as how to defend press freedom and best practices against police tear gas and beatings. In an adroit move in November, however, Schneider also persuaded the club to invite C.Y. Leung, a former Beijing-backed chief executive of Hong Kong, to speak. As expected, he warned democracy advocates not to cross the "red line" of pressing for independence.

Now Beijing has announced a new national security law that could equate criticism of the Communist Party with sedition, even treason, prompting the club to issue an open letter of "concern" about its effect on journalists and press freedom. And that's on top of the coronavirus pandemic, which has added more misery to an economy already in deep recession from the political turmoil.

For Schneider, who's a friend and former colleague, the virus was just another unexpected event in a year full of them. In late November, I met with her at the big oval bar of the club, which occupies an elegantly repurposed, high-ceilinged, multistoried former warehouse from British colonial days. She fielded greetings and traded wisecracks with the regulars as she joined me at a table against the back wall. She seemed unusually vibrant, perhaps because of the nearly unanimous praise she'd earned for her stewardship of the club through difficult days.

"Jodi has been an incredibly steady hand at the FCC during turbulent times," Keith Richburg, a former Washington Post Beijing bureau chief and onetime FCC president himself, told me. Now director of the Journalism and Media Studies Centre at the University of Hong Kong, Richburg credited Schneider with "exactly the levelheaded, balanced approach and leadership we need, never wavering to defend press freedom while steering clear of histrionics."

Nearly everything that has happened in Hong Kong recently was unimaginable a year ago, much less when Schneider first caught the journalism bug at the University of Wisconsin at Madison in the early 1980s. Like many of her generation, she was inspired by The Washington Post's celebrated coverage of the Watergate scandal. As she raced through reporting jobs with newspapers in Colorado and Florida, the scoops piled up, eventually landing her a job as a local business editor at The Washington Post. That was followed by more senior editing stints at U.S. News & World Report and then Congressional Quarterly, before she headed to Bloomberg, which eventually sent her to Tokyo and then Hong Kong.

Even with the coronavirus pandemic, she has managed to keep the club open with temperature checks at the door and new socially distanced seating arrangements - the bar stools are gone, so no more elbow-to-elbow drinking as of old. In May she was reelected, unopposed, for a second term. Now, as she waits for the next wave of protests - and the possibility of Beijing's secret police rolling up dissidents for sham trials - she expects China to more closely monitor reporting and tighten controls over how many Western journalists can work in Hong Kong.

Which would bring the club full circle to its ramshackle days during World War II in Chungking (now Chongqing), when it was less a club than a band of brothers in search of warm bunks, decent whiskey and straight answers from Chinese Nationalist leader Chiang Kai-shek. "The club moved with the action," hopscotching across treacherous battle zones and eventually landing in Shanghai, according to a history in the FCC's Correspondent magazine. In 1949, menaced by a communist "fifth column" in the city, the club retreated to the safety of British Hong Kong, where it "gained a reputation for high living in boozy camaraderie that it has never lost," according to the affectionate 1999 BBC documentary "Of All the Gin Joints."

In early June, I asked Schneider over the phone whether things were grim now, given the situation in the city. "Not really," she said, chuckling. Reporters will be reporters. The same for the bankers, diplomats, public relations people and suspected spies who drop by for a beer or a meal. Downstairs, the famous Bert's jazz club has reopened, along with the gym, albeit with physical-distancing restrictions.

"It's still kind of a port in the storm, a safe place," Schneider says of the club. And, she points out, with outgoing flights still virtually shut down because of the pandemic, "no one can leave here. So this summer, the place is going to be packed. There's nowhere else to go."