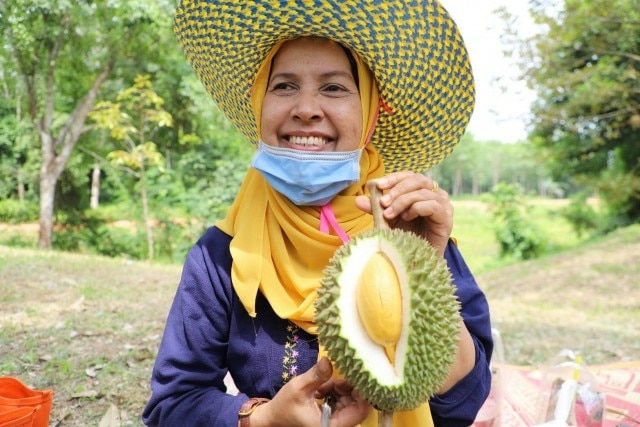 Pattani launched its Puangmanee durian season today with promotions designed to lure the lucrative Chinese market’s hunger for this unique variety of the pungent fruit.

Pattani Governor Kraisorn Visitwong presided over the opening of the durian festival on July 2. After revealing this season’s festival motto – “Great durian, Puangmanee of Yarang district, the jewel of Pattani river basin” – he thanked visitors and participants, before overseeing a durian charity auction which yielded Bt9,000 to be donated to a local foster home.

Puangmanee durian is a small-sized variety weighing 1.3-1.8 kilos when ripe. Its flesh is smooth and creamy, but not too sweet, with a smell that is not as pungent as larger durian varieties

Kraisorn said that farmers in the southern provinces are trying to meet Asean Good Agricultural Practice (GAP) standards in order to boost the market for native durian, rambutan, mangosteen, southern langsat, and pomelo. China had also shown interest in importing Thai Puangmanee durian, he added. He hopes the fruit will help boost both local farming and tourism incomes.