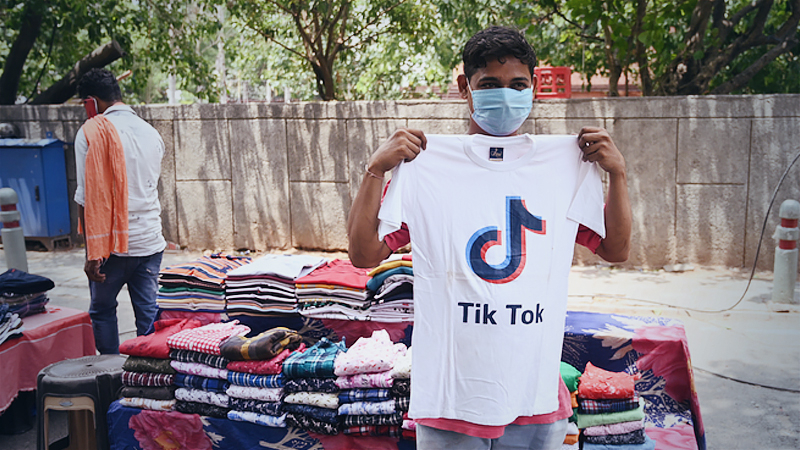 A vendor poses in front of his stall with a T-shirt bearing the logo of the video-sharing application TikTok in New Delhi on Tuesday, June 30, 2020. The Indian government announced a decision on Monday to block 59 Chinese apps citing "sovereignty and integrity" concerns. [Photo/Agencies]

Beijing said on Friday that it will take necessary measures to uphold the legitimate rights of its businesses in India after New Delhi announced the exclusion of Chinese companies' participation in highway projects and additional scrutiny of imports from China.

Pragmatic cooperation between China and India is mutually beneficial, Zhao said, and called for the two countries to meet each other halfway and jointly safeguard bilateral ties.

The measures taken by India came after a clash between Chinese and Indian troops at the border area in the Galwan Valley on June 15. The two neighbors have been locked in a tense border situation since May. India also announced earlier this week a ban on 59 Chinese apps citing "sovereignty and integrity" concerns.

The two nations have held three commander-level talks between their militaries to deal with the border tension. The latest one was held on Tuesday.

"India should avoid strategic misjudgments on China," Zhao said, adding that he hopes that the two countries can enhance communication and coordination on the proper handling of the border situation through diplomatic and military channels and ensure peace and stability in the region.

As two major developing countries, economic development and national rejuvenation are shared missions for both sides, he said.

Therefore, mutual respect and support is the right thing to do and also fits into the long-term interests of both countries, while suspicion and friction are wrong paths and go against the aspiration of the two peoples, Zhao added.

In response to a question about Indian Prime Minister Narendra Modi's visit to the Ladakh region in the border area on Friday, Zhao said both sides shouldn't take any actions that could further complicate the situation.