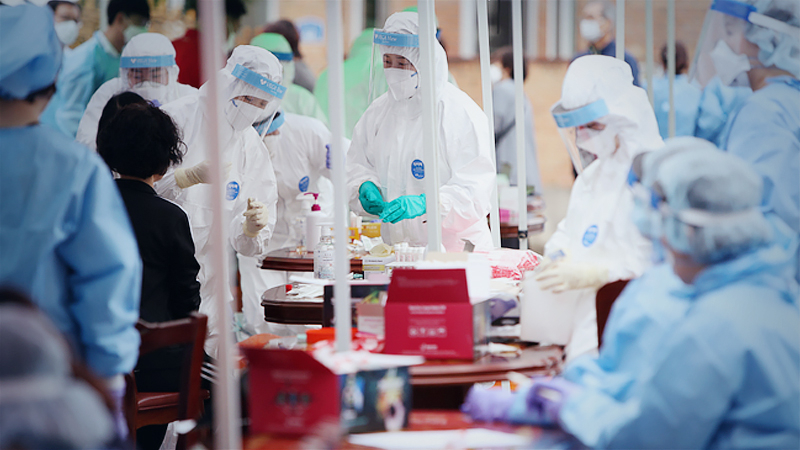 The Korea Centers for Disease Control and Prevention said in a briefing the renewed coronavirus surge was filling up hospital beds quickly in cities experiencing flare-ups, and that adherence to physical distancing was paramount to ease the shortages.

“We should act as though we have COVID-19 in social situations, and avoid engaging in activities that may put others at risk,” said the agency’s director Jung Eun-kyeong.

Hospital beds are running out fast in Gwangju, which confirmed 53 cases in the past week. Some 81.8 percent of beds at coronavirus-only hospitals there are currently occupied and all of its intensive care unit beds have already reached maximum capacity.

In a briefing held Thursday, Gwangju Mayor Lee Yong-sub said he had asked other municipal offices for available beds. As the majority of newly diagnosed patients in Gwangju are older adults, their chances of developing severe cases are high, he added.

“We are facing dire shortages of medical supplies and our health institutions are short-staffed,” he said.

Gwangju officials say they are wary of the catastrophe witnessed earlier in Daegu, formerly the country’s epicenter, being repeated in the city.

At least five people died while waiting for beds in Daegu and the nearby North Gyeongsang Province at the outbreak’s peak in late February and early March. At one point, as many as 2,270 patients there were denied immediate care and had to stay home, waiting to be admitted.

According to the KCDC’s daily situation report, there are 34 patients severely or critically sick with COVID-19 nationwide as of Friday afternoon. Thirteen of them have been administered with remdesivir, an experimental antiviral that can hasten recovery.

Korea added 63 more cases of COVID-19 in the 24-hour period ending midnight Thursday, raising the total tally to 12,967. Among them, 52 were locally transmitted and 11 were imported. Most -- 11,759, or 90.7 percent -- of those diagnosed have since been declared recovered and discharged from care. A further 926 patients are still undergoing treatment. So far, 282 people have died from the disease, leaving the fatality rate at 2.17 percent.